The feature match we originally intended to bring you has been preempted by a concession. Osamu Fujita conceded to Kouichirou Maki. Osamu is already qualified for PT Amsterdam and wanted to help his good friend make it back onto the Tour. Osamu's record was strong enough that he could still win out to make it in himself.

Instead we bring you the top seeded player--and amateur status player--Satoshi Harada facing off against third seed Tomohide Sasagawa. 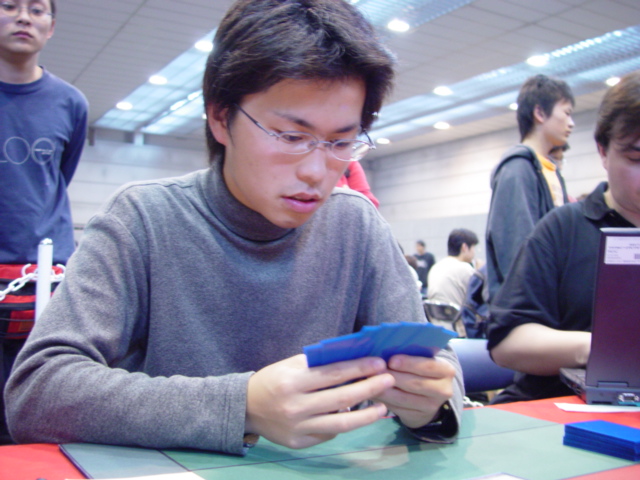 No problems for Sasagawa. He played a Banshee's Blade and equipped the flier sending it into battle. When Harada blocked he pumped it with his Bladewarden and the equipment picked up a counter during combat. It would get through next turn, no doubt. Harada played a Copperhoof Vorrac and passed the turn. He did not block the Ascendant and it grew to a 5/5 with the Blade. Sasagawa played a Cub and Myr and passed the turn staring down a 6/6 Vorrac that wasn't getting any smaller. He had no blocks and Harada played a Pewter Golem and a Tel-Jilad Chosen.

Meanwhile Sasagawa moved his equipment over to the Cub and attacked with two fliers--one a 3/3 and the other a 5/5. Harada put his Archers in the way of--nobody--and he fell to five after the boost from the Bladewarden. After combat he summoned a Clockwork Vorrac.

Harada ticked off his chances on his fingers and counted up the creatures. He sent in only the Pewter Golem and Sasagawa fell to ten. He attacked with both of his fliers but Harada shot the Cub out of the sky with a Turn to Dust (he sunk the mana into regenerating his Golem) and gave up his Archers to the Ascendant to buy another turn. Sasagawa played a Skyhunter Patrol and sent the turn back to Harada who saw no option but the alpha strike. Once Sasagawa demonstrated his willingness to block Harada conceded.

In between games the judge gave them both a quick lesson on the proper use of the playmats with special emphasis on using the red zone. 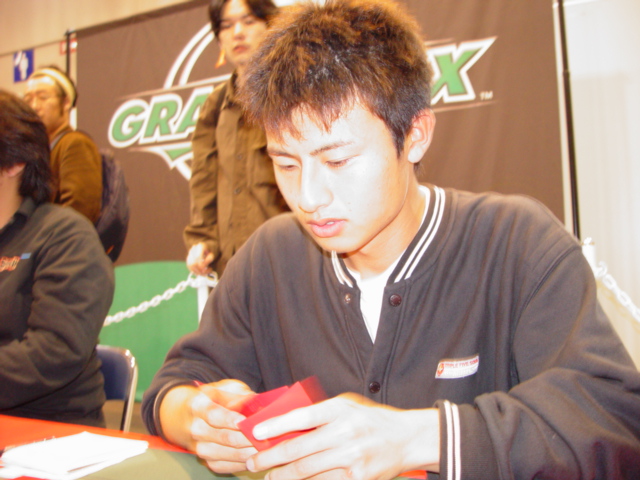 Speaking of right along the mana curve--Sasagawa had the Slith Ascendant ready to go for turn three prompting a pained groan from Harada. He ripped another Chosen and was attacking every turn but the Droplet was easing the beatdown. Skyhunter Patrol threatened to stop it all together.

Harada played creatures every turn making a Myr Enforcer on turn five but he could not attack. Sasagawa--who was at eighteen--kept the pressure on high and sent his two fliers into combat. He played a Skycub and a Banshee's Blade after combat and crept up to nineteen on his opponent's next turn. He took ten on Harada's crack back expecting to gain some of it back. Instead he took two more when the Sun Droplet was Detonated.

Sasagawa showed no fear and attacked with all of his guys after putting the Blade on his Cub. Of course he had the Blinding Beam and cast it without kicker to lock Harada's four men in the tapped position. The last undefeated player of the tournament fell by the wayside.