This is it: the final match of the day. At 24 points each, there's a chance that neither player can make it to the Top 8 evenif they win, but that doesn't mean they're not going to try. After a solemn handshake, Mori and Ikeda began shuffling their decks. 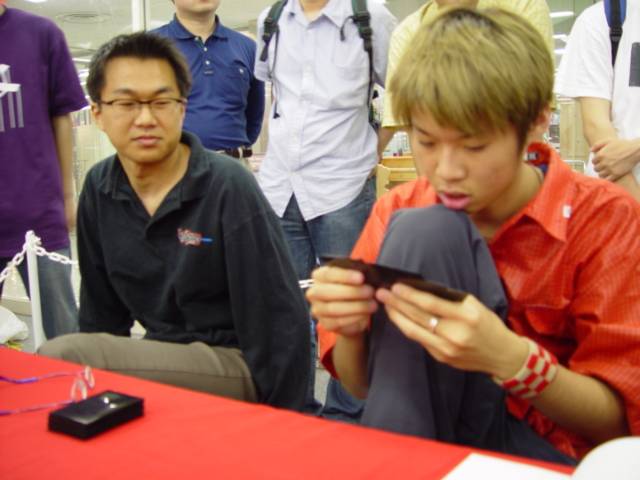 Mori kept a starting hand with only 2 Swamps, but lucked out with his first draw, netting a Forest that allowed him to play Harvester Druid. Ikeda summoned a Cephalid Scout, thinking it could hold off the Druid, but Mori powered it up with Elephant Guide and began knocking down Ikeda's life total. Trying to play out his hand, Ikeda made a Krosan Restorer. Mori didn't let up, removing it immediately with Crippling Fatigue while keeping up the Druid beatdown. Desparate to get rid of the superhuman Druid, Ikeda made a Dreamwinder and traded it for the Druid. However, that didn't change the board situation much--instead of a 4/4 Druid, he still had to deal with a 3/3 Elephant. Lucking out and drawing another Dreamwinder, he was able to stabilize the board, but was already running precariously low on life and cards. Unrelenting, Mori produced in quick succession a Soul Scourge and Nantuko Cultivator. Ikeda was able to hold the line on the ground with a Nullmage Advocate and Cartographer, but couldn't do anything about Mori's flier and scooped. 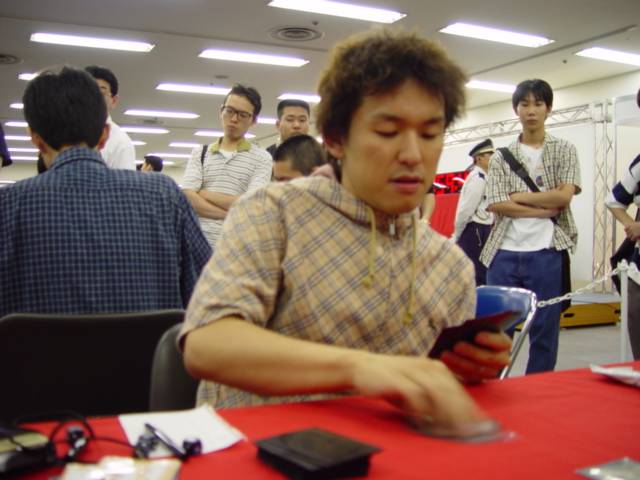 Mori kept his tempo from the first game with a first turn Diligent Farmhand and a second turn Putrid Imp, but Ikeda was able to nullify his offensive with a third turn Nullmage Advocate. The standoff continued, as Mori produced a Krosan Restorer and an Ironshell Beetle (powering up the Imp), only to have Ikeda counter with a Hydromorph Guardian. In the end, the deciding factor of the match was luck: Ikeda ran out of lands and began discarding, while Mori's deck offered up a stream of game-swinging cards: Rabid Elephant, Morbid Hunger, Arcane Teachings, Seton's Desire, Crippling Fatigue... Drawing only one land from the start of the game, Ikeda could only shake his head in disbelief at his poor luck, begrudglingly offering his hand to Mori.