what Randy Buehler billed as potentially the world's loudest feature match, this round pitted jokester Antonino De Rosa against similarly jab-slinging Gabe Walls. De Rosa's antics were in effect early. "How much you think the combined weight of this feature match is?" he asked an audience member. 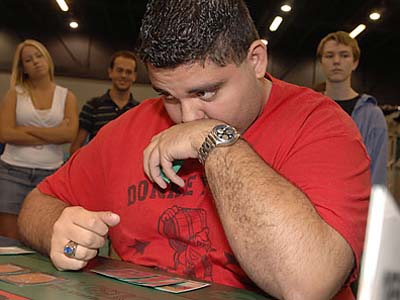 Antonino De Rosa attempts to pout his opponent into submission.

That question would be more relevant than De Rosa realized. A virtual mirror of green-white Ghazi-Glare decks, the match would come down to individual card choices, a certain legendary pointy stick, and eventually, body sizes.

Walls won the roll and proceeded to mulligan twice.

While Walls was shuffling, an audience member asked, "What does Gabe want here at five cards? Forest, Watchwolf…"

De Rosa: "No, I know what he wants. Forest, Temple Garden, bounceland, Llanowar elves, Congregation at Dawn."
Walls: "I'd take that."

Walls led off with a quick Llanowar Elves off a Temple Garden, then a Jitte but no second land. De Rosa matched it with artifact removal in the form of his own Jitte. Then the players made matching Selesnya Guildmages, which crashed and traded. De Rosa started cranking out the heavies, deploying Watchwolf, Watchwolf, and Loxodon Hierarch, while Walls developed his mana with Wood Elves and put up a Hierarch of his own.

De Rosa upped the ante with Kodama of the North Tree, and Walls had an answer to everything else in Glare of Subdual. The Wolves found themselves tapped down, but North Tree smashed through for 6. Walls looked to get the party started with his last card, a Selesnya Guildmage-type token factory of doom, but De Rosa Seed Sparked the requisite Glare at the end of his turn.

His attackers now free, De Rosa piled large mammals into the Red Zone. With 4 mana open, Walls could pump his creatures and kill a lot of men. He grinned with indecision, knowing this was a crucial turn. At the end, he took it all, going down to 1 life. De Rosa put a 4/4 nail in the coffin with another Hierarch. Walls made a token, checked his next draw, and scooped.

Walls folded his sideboard into his deck and started riffling through all 75 black-sleeved cards.

De Rosa: "You're sideboarding all your cards in and taking 15 cards out? I used to do that way back..."

Walls: "I don't want you to see how I'm sideboarding. I don't know how to sideboard for this!"

De Rosa: "Are you trying to trick me?"

Walls: "I don't have to work very hard, you're pretty stupid…"

De Rosa: "That's true, just do it. (nodding patronizingly) Just make sure you end up with 15 cards in your sideboard."

Walls checked his opening seven, gave his deck the "ha, ha," and had to mulligan again.

De Rosa: "I've never gotten a hand with this deck where I'm like, I want to keep. It's always, keep, and cringe."

Walls: "You got there last game."

Walls: "My land in that hand was Miren!"

But Walls was able to keep his five with confidence. Walls revved up with Brushland and Selesnya Sanctuary into Wood Elves while De Rosa recruited Selesnya Guildmage and Llanowar Elves. De Rosa then made an Umezawa's Jitte that the Guildmage wielded on its way into combat.

Walls called a judge to ask whether Shining Shoaling the Guildmage's damage would still put counters on the Jitte. The answer was yes, that since the combat damage is not prevented, just redirected, and it is still combat damage, counters would still pile up. Walls blocked with his Wood Elves, then untapped and cast Wrath of God.

De Rosa was now back to two mana, but was still able to make a fresh Guildmage. Walls dropped Miren and a Wood Elves, bringing him to 7 total mana. The Elves died before they were able to block as De Rosa's Guildmage picked up the Jitte.

De Rosa gave the go-ahead, and Walls, straddling his reversed chair, stood to right it. "You turn your chair around because I don't draw a land?" De Rosa asked, and Walls responded with a smile and Yosei, the Morning Star.

Guildmage got through, its Jitte bearing 3 crucial counters. It got through and shot the dragon dead. 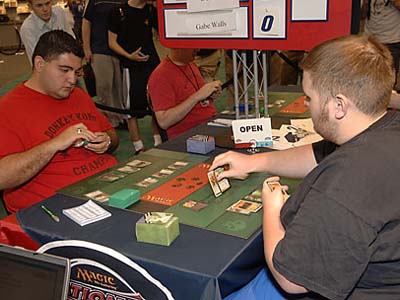 Walls and De Rosa battle it out.

Walls drew and played a Selesnya Guildmage of his own, now able to fight a fairer fight against the Jitte thanks to Miren, the Moaning Well. Walls spent a turn on the make-a-token, sac-a-token plan, actually gaining life as De Rosa attacked with Jitte wielders.

Walls made a Wood Elves with plans blazing in his eyes. De Rosa offered, "I'll shuffle for you. You done after that?"

De Rosa made a Loxodon Hierarch and later a North Tree, but Walls had accelerated up to 12 mana and had an army-in-a-box ready to go. Jitte couldn't get any counters built up until Walls had four saprolings and had tapped down all of De Rosa's non-North Tree blockers. "What do I have to do to lose this game?" Walls asked himself. He swung in with Guildmage and four saprolings, and De Rosa blocked the Guildmage. Walls pumped the team once, pumped twice… the four unblocked saprolings were 3/3s with De Rosa at 13.

Both players were able to keep their openers. Walls made a Guildmage while De Rosa accelerated with Wood Elves. Walls played Temple Garden untapped to make a Wood Elves of his own. The players were playing fast, and De Rosa questioned why Walls took 2.

De Rosa of course had the Jitte-equip turn, and swung in to kill Walls's Guildmage. De Rosa had had Jitte advantage all three games; Walls was all sarcasm as he said, "Look at the shocked look on my face."

De Rosa deployed Hierarch while Walls trumped it with Yosei. Walls tried to race through the air, but De Rosa's forces crashed through on the ground and killed off potential chump-blockers with Jitte counters. Walls stopped that noise with a Wrath, but De Rosa followed up by dropping Arashi, the Sky Asunder into play. That brought a "what the…" look from Walls. 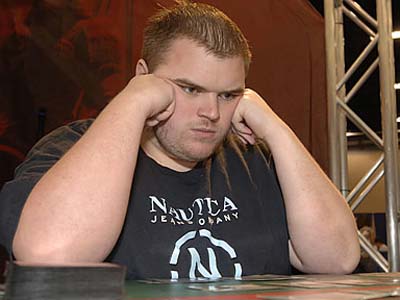 Walls: "He is terrible!"

Walls: "Why would you have it in your deck?"

De Rosa: "It's big. It's bigger than Hierarch."

The reason for Walls's protest became clear. "Well, this is a little awkward." He cast the very Hierarch that the 5/5 Arashi was meant to trump but protested, "You're still stupid."

Walls had some chump-blocking to do, including double Vitu-Ghazi, the City Tree, but De Rosa had a series of Llanowar Elves and Arashi holding a Jitte. De Rosa swung in, murdered some saprolings, and hit hard enough to bash Walls's life total to negative.