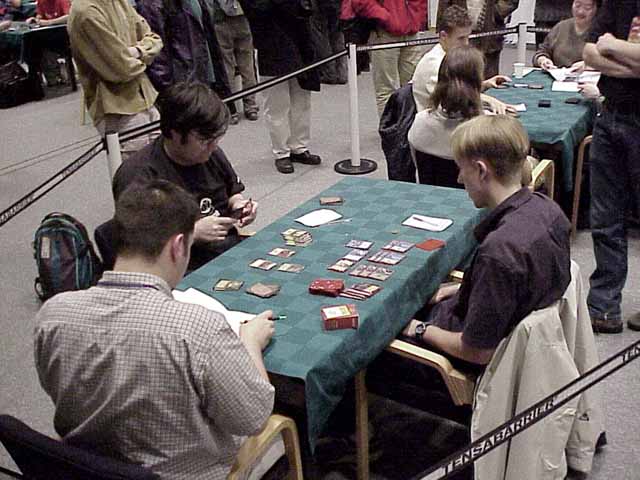 Zvi is widely regarded as one of the hardest working players on the Pro Tour, posting impressive perfomances including a top 4 at PTNY '99, and finishing 9th at Worlds 2000. Mattias Jorstedt is a member of the European Alliance, and while he has yet to post any really impressive finishes, he is widely regarded as one of the more impressive European players, and has a good grasp of limited strategy. Zvi was playing a fat green beats deck, while Mattias was playing a Black Blue deck with tempo control, and green hating creatures.

Zvi's opening was incredibly slow in game 1 laying only forests until turn 5 when he finally cast a Pincer spider without kicker. Mattias, in the meantime had made a Phyrexian Battleflies and a Metathran Zombie, and already had Zvi down to 14 life. He Repulsed Zvi's Spider before attacking him down to 11. Zvi made a Kavu Climber in a desperate attempt to find a non forest land, but was unable to do so. Stuck with 5 sources of green, Zvi was struggling to get off the back foot against Mattias' flying beatdown. Mattias attacked with the flies, pumping once to leave Zvi at 10 before making a Faerie squadron with the kicker. On his turn 6, Zvi played another Forest and cast the Spider with the kicker. Mattias recoiled the Spider and attacked to put Zvi on 5 life. Zvi beat down with the Climber, and Shackled the Battleflies. Mattias attacked with the Faerie Squadron, and used Cursed Flesh to finish of the blocking Spider, before making a Phyrexian Slayer and Recovering the Squadron. Next turn Zvi attacks for fun to see if Mattias will block, and concedes soon after.

Zvi elected to go first, and this time his opening hand was 1 plains, fertile ground, Harrow, Thornscape Apprentice. He calculated the odds of him drawing a forest but decided he couldn't risk it mulliganing to 6. Bizzarrely his next hand also had only one plains, but without the mana producers that the last land hand. He kept, laying his plains and saying go. He then proceeded to miss land drops 2 and 3, and only managed a second plains by turn 4. Meanwhile Mattias had made a Shoreline Raider, and a Vodalian Serpent, and was beating down Zvi's life total. On turn 5 Zvi finally made a Forest and cast a Pincer Spider without the Kicker. Next turn he Armadillo Cloaked up the Spider (which Mattias had put a Mourning on the turn before), and tried to stabalise his life total. Next turn Mattias recoiled the Spider, letting his mourning go to the graveyard since he only had 1 black mana, and attacked again leaving Zvi at 14. Zvi laid a land, and recast the Spider with Kicker, but the Pro Green Zombie kept nibbling Zvi's life total. Mattias then made another unblockable guy, Slinking Serpent, and appeared to have the match under control when he Cast cursed flesh on Zvi's Thornscape apprentice. Zvi tried to retaliate with a Rooting Kavu, which he cloaked up to gain some life, but it was bounced by Urborg Emmisary the very next turn. Mattias attacked for 7 leaving Zvi at 7. On Zvis turn 11 he played Thicket Elemental with Kicker, and turned over a few land and an Angel of Mercy, putting him back at 10. Mattias then attacked with everything, trading the Angel for the Squadron, and Leaving Zvi at 4 life. He recovered his Faerie Squadron, and the next turn Zvi conceded. In short both games were decided by mana problems on Zvi's side of the table.