Round 12: Gabriel Nassif vs. Kamiel Cornelissen 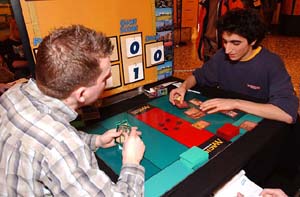 The tension of the feature match area is not unknown for these two players. With Kamiel running Beast-Bidding and Gabriel running Goblins this match would prove to be a quick one. Either Kamiel would get out an army of beasts on turn 5, or the little red men would overrun him. Gabriel also won the toss, giving Kamiel one turn less to do his thing.

Gabriel opened with a Goblin Sledder, Sparksmith and Gempalm Incinerator, putting the pressure on. Kamiel cycled two Primoc Escapees during that time, but had to show the mediocrity of his hand to Gabriel because he had to cycle the second one during his third main phase to find an extra land. The Dutchman did find it but went down to 13 already during Nassif's next attack. A Goblin Goon was added to Gabriel's side of the table. Kamiel who once again faced missing a landdrop had to cycle his Krosan Tusker to fetch a Swamp. Gabriel brought the Dutchman down to 3 during his next attack and Kamiel scooped after his next draw, not having cast a single spell during this game. 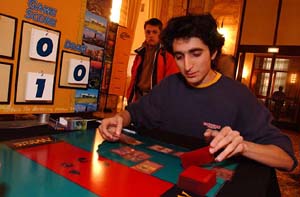 At least Kamiel got to play first this time around. He played out a Forest and Swamp during his first two turns, cycling a Primoc Escapee at the end of Gabriel's second turn. Gabriel started with a Skirk Prospector and Goblin Piledriver to put the pressure on. Kamiel once again showed the weakness of his hand by cycling another beast during his main phase to fetch a land. Gabriel however realized this could well be a mind trick to lure him into an Infest. During his turn he thought for quite a while before playing out another Skirk Prospector and a Sparksmith.

Kamiel then cast a morphed Krosan Colossus, electing a big smile from the Frenchman. The morph died after the Sparksmith hit it for 4, and Kamiel went down to 8 in the subsequent attack. Gabriel played a Goblin Goon, and Kamiel scooped, showing Gabriel his 3 Ravenous Baloths in his hand.