Round 12: Gary Wise vs. Chris Manning 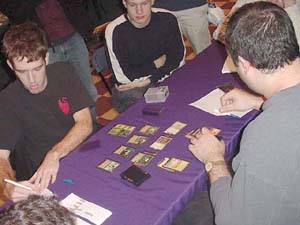 "Every person here is rooting against you, Gary!"

As I sat to cover this match, this was the first thing I heard. Gary looked shocked for a second, but then quickly surveyed his surroundings and grinned.

"Of course they're against me. Everyone here is YMG."

And so it was true. A good contingent of Boston area players had gathered around to cheer on Manning, as he and Wise battled for a top eight slot. Both players shuffled up, and Gary was about to present his deck when he gave it a last minute pile shuffle. This revealed a strange card count (43 cards), which Gary double checked before calling a judge over.

It seems that Gary had been the last person to complete his deck registration, and asked a judge to bring him lands. The judge brought him ten mountains and plains (instead of the exact amount Gary requested), and Gary simply sleeved the whole stack and shuffled up.

Since he hadn't presented his deck yet, Gary was allowed to remove the excess lands (since he had only registered 17) and was given a warning. Since he had to take out and recount his lands, Gary needed additional time to shuffle. Finally, both players presented and the match began.

First Gary mulliganed, and the Chris did the same.

Gary: "This match is going to take longer to start than any other in history." 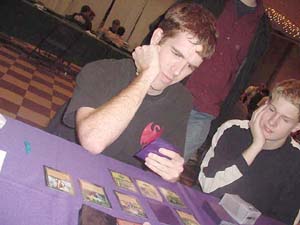 Each player kept their six card hands. Chris led his first few turns with elves, elves, and elves. Wellwisher, Birchlore Rangers, Taunting Elf, and Wirewood Elf all came into play by turn three. Meanwhile, Gary started out without one of his multiple Sparkcasters which would wreck Chris, and had to settle for a Gustcloak Courier and one of his three Daru Cavaliers. The Wellwisher kept the game as a wash while Gary played Cavalier after Cavalier from his deck.

Wise dropped the hefty Tephraderm, while Manning had a morph creature. It turned out to be a Broodhatch Nantuko, which became four insects after it blocked the 4/5 beast. Gary finally played one of his Sparksmiths, and looked ready to absolutely dominate the game.

Well friends, Taunting Elf saved the day. Back with Wirewood Pride, it led the charge of the green brigade all over Wise's side of the board, taking out the Sparksmith, a newly summoned Dive Bomber, and allowed him to hit for a lot of insect damage. Wise swung back, but the Wellwisher was keeping Manning at a very healthy life total. Consecutive plays of Venomspout Brackus, Krosan Groundshaker, Krosan Groundshaker for the mono green mage seemed to solidify his position.

Gary tried to come in through the air with his Harrier while Manning only had a single Forest open for the Brackus—except Gary completely forgot that Manning could add a green to his pool with the Birchwood Elves from turn one! The green creature killed the flyer, and Chris swung with his beasts. Although Gary tried to triple block one Groundshaker with his first striking Cavaliers and the other with his Tephraderm, a Tribal Unity for five combined with trample activations on the beasts spelled doom for the outspoken Canadian.

Chris couldn't believe he won the first game—he was visibly shaking while sideboarding for Game 2. He requested Islands for his deck (to side in Choking Tethers), which resulted in a warning for taking excessive time to sideboard. 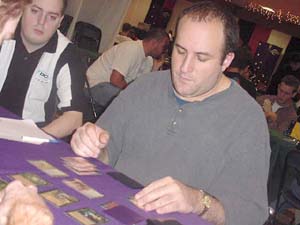 Game 2 went much like the first, with Chris leading with multiple elves early. This time however, Gary played a turn two Sparksmith, which proceeded to take apart Manning's early team one by one. First Birchlore Ranger died. Gary attempted to shoot Wellwisher, but it survived due to a Wirewood Pride. Having no more of these shenanigans, Gary played a Goblin Sledder and started doing two to each of the Elves. Although Gary brought himself to only eight life over the course of the game with the Sparksmith, Manning couldn't keep any creatures on the board, and lost to a hoard of Cavaliers.

Chris made the decision to draw this game, hoping to give Gary less of a chance to draw into his Sparksmith. It didn't work, as Gary played a Sparksmith on turn two. This game Manning had literally no answers, and went down very quickly in a hail of goblin flames.

2 Voice of the Woods 1 Daunting Defender