Round 12: Gerardo Godinez vs. Gerardo Saiz 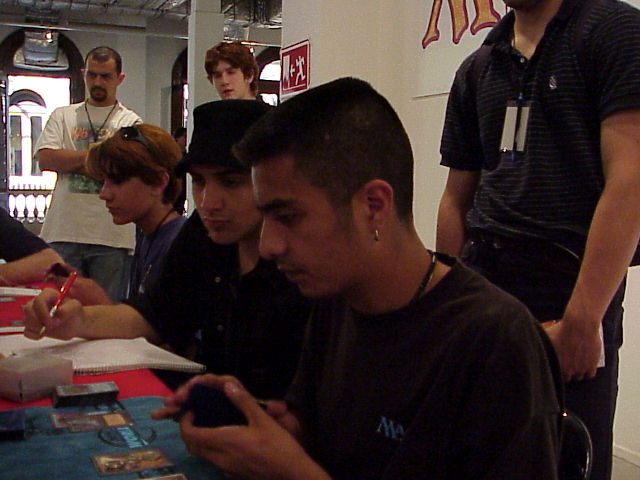 One first name, one common goal. Going into the final round of the swiss, the Gerardos Godinez and Saiz knew that a win here could mean a top 8 appearance while a loss might drop them out of the top 16. Game 1 was virtually decided on the second turn. Saiz, playing Tradewind Survival, cast a Survival of the Fittest to follow up his first turn Quirion Ranger. Godinez tried to mount an attack before the Tradewind engine could get going, but all hope of this was lost when Said not only had the Mana Leak for Godinez' Crystaline Sliver, but also the Force of Will for the resulting Pyroblast. Four turns later, Saiz had a Tradewind, the Quirion Ranger and the 4 Squirrel tokens, and as he was losing a land each turn, Godinez chose to save time and conceeded.

Unfortunately for Godinez, things went even worse in the second game. After taking a mulligan, Gerardo decided to take a chance and keep a 1 land hand with a number of strong 2cc spells. Unfortunately, not only did he not draw any more lands, but Saiz cast a 1st turn Quirion Ranger, second turn Wall of Roots and third turn Tradewind effectively locking the game. With Saiz' Land Grant showing Godinex a handful of counter magic, while drawing a number of Swords to Plowshares could concievably help the Mexican break through, he decided that the odds were thin enough that he should just concede to save time.