Round 12:
The Great Jace Race

If this Pro Tour is any measure of the runners in the Implicit Maze, we should instead be calling things The Great Jace Race.

Robert Jurkovic, already saddled with one loss and two draws, took a quick two game defeat from European teammate and Hall of Fame legend Kai Budde, fighting his way from the bottom of the leaders-chasing pack. 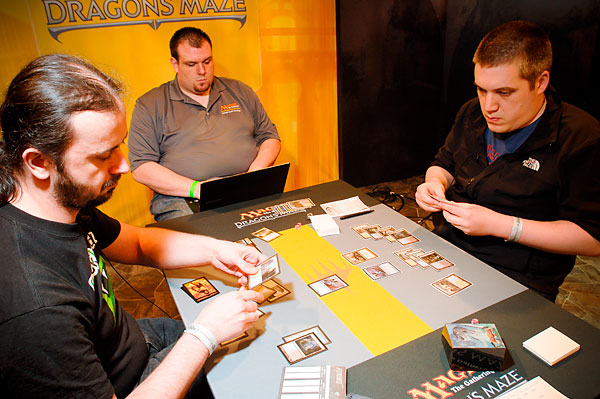 Kai Budde and Rob Jurkovic, teammates for this event, have been playing for a long time. However, in the Esper mirror match, it was Hall of Famer Budde that emerged victorious.

"In both games Jace, Architect of Thought won it," Budde explained. "In the first game, I went first and he didn't have the Syncopate. Jace resolved, I used Fact or Fiction once, and he had to use his own Jace to kill it, but I was far ahead already. We both didn't miss any land drops, and we both had two Ætherlings," Budde said, referring to when Jurkovic had two in play at one point, "but I was playing first and had the Jace activation; I was always one step ahead."

"Once Ætherlings are on the table it's just about tempo," Budde continued. "You can't block. You can't really do anything. There's just no interaction."

The second game played out similarly. "When I had to tap out to kill his Precinct Captain and his token, if he had anything good there I would have been really behind. But I knew that he didn't have Obzedat, Ghost Council," Budde said, referring to another difference between their decks, "and he couldn't play an Ætherling there because I'd just kill it, The worst thing he could do was Sphinx's Revelation for three, and that didn't seem that bad. He had nothing and just passed the turn, and my Jace was still on the table. I'm just winning from there I think." 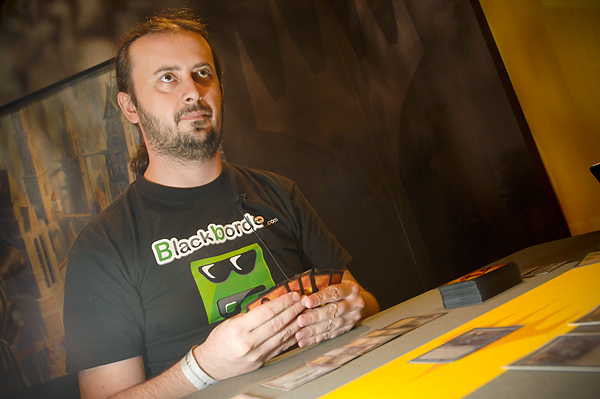 Jurkovic did his best to fight off his teammate, but the first to land Jace often wins the race, and Jurkovic was left in the dust.

Being teammates was an advantage for both players, and Budde knew it. "We're pretty much playing the same deck; we tested together. The main difference is I'm playing Precinct Captains main deck, which I think is an advantage in Game 1 for me. But he..." Budde said, pointing over to Jurkovic, "...has Azorius Charms in his deck. After sideboarding we're playing the same deck, and I just out-drew him."

"I didn't draw any Supreme Verdicts in Game 1," said Budde, with a chuckle.

There's one word to describe him through the years Budde reined: indomitable. Like the other greats that appeared in force this weekend, Budde is a throwback to another era of Magic; a reminder of what membership in the Pro Tour Hall of Fame really means. It's what sets him apart in the same way as Jon Finkel and Brian Kibler. He returned to the game after a long break to find high-level success in the Top 8 of Pro Tour Amsterdam 2010.

Jurkovic has been playing as long as Budde, but hasn't found nearly the same measures of success. A consistent contender for the Slovak Republic's National title, Jurkovic too earned the Sunday light of a Pro Tour Top 8 at one time. He had a one point lead and wide gap in tiebreakers between he and Budde going into the match, but like so many things in Magic, Budde smashed those too.

The first game really was all about Jace, Architect of Thought. After Budde used Jace's ability to draw Far & Away and Isolated Chapel, Jurkovic dumped his own to clear it. Jurkovic went on to resolve Sphinx's Revelation twice before Budde played Sin Collector to find the Slovakian holding four lands and two copies of Ætherling.

Over the next three turns, both players cast their copies of the shapeshifter before Jurkovic landed his own Jace, Architect of Thought. "Have some Supreme Verdicts. I don't particularly care," Budde offered when two of the removal spells appeared next to a land for Jurkovic when he finally had a Jace activation of his own. With a grip full of ways to keep Jurkovic off attacking with Ætherlings, and his own safe from reprisal, Budde quickly brought the life totals to 18-0.

With Jurkovic leading the turns in Game 2, it was Budde that made the first move with Precinct Captain. Far & Away from Jurkovic sent the Soldier packing before he played his own, but it left a window for Budde to make the important first Jace of the game. Tapped low, Jurkovic used Reap Intellect to rip away all three copies of Budde's Obzedat, Ghost Council before getting in an attack. 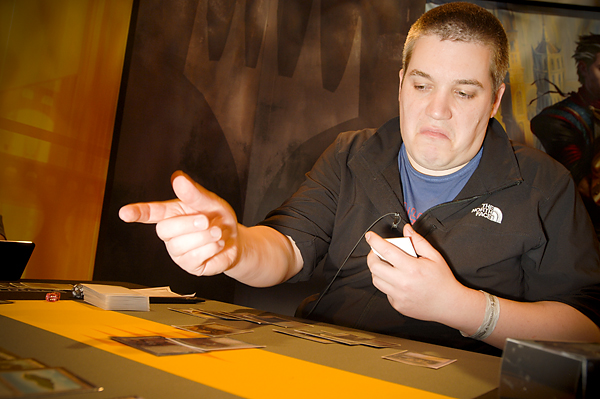 Budde's Precinct Captains, one of the only differences between the two players' decks, forced Jurkovic's hand in this match.

The risky moment where Budde tapped out for a fused Far & Away was rewarded with Jurkovic just passing back. From there, Budde used Jace, Architect of Throught to draw another copy of Jace, another Precinct Captain, Sphinx's Revelation, and, finally, the Ætherling that went the rest of the way.