Round 12: Hisaya Tanaka vs. Osamu Fujita 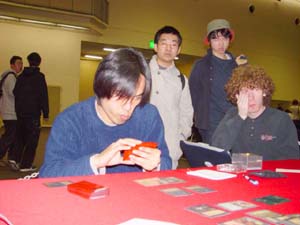 Osamu Fujita always looks like he's had a really bad day. A mop of slack, jet-black hair always hides his sunken eyes, and even when he smiles it's more like a jack-o-lantern than pure friendliness. Nevertheless, under his gruff exterior is a heart of gold. Somewhere. His opponent is Hisaya Tanaka, one of Japan's top-ranked limited players. Unsurprisingly, both of these heavyweights were in pod one.

Fujita started things with a mulligan. His six cards yielded two lands, and he kept. He started with Goblin Turncoat, and facing no play from Tanaka and no third land he let out a huge sigh and dropped Skinthinner face-up on the table.

Tanaka had no trouble hitting three lands of three different colors, and started with a morph. Fujita smashed for four and passed it back. Tanaka added a Vile Deacon. He traded it with the Turncoat, and Fujita showed that he'd drawn Barren Moor. Daunting Defender from Tanaka shut down the rest of Fujita's offense. He made a Severed Legion only to have it trumped by Gluttonous Zombie.

Fujita found a fourth land and played a Screeching Buzzard. Tanaka's team attacked and Fujita tried to double-team the Zombie. Tanaka flipped over Skirk Marauder. Adding injury to injury, he put a Screeching Buzzard on the table, out-gunning Fujita four-to-one. Spitting Gourna from Fujita threatened to make it interesting, but he was at six and Tanaka found the "Attack with everyone" Fujita fell to one, and then scooped.

Game 2 was Tanaka's turn to mulligan, as his unstable mana failed him. He managed a Glory Seeker, but was soon under fire from a morph and Screeching Buzzard. He spent his third turn cycling Gempalm Avenger, then put Sandskin on Fujita's morph. It was far from a lightning opener. Daunting Defender came to his aid.

Fujita was content to serve in the air for two while he built his forces. Barkhide Mauler made sure nothing would come through on the ground. Tanaka tried Gluttonous Zombie. Fujita dropped Berserk Murlodont and swung in with his Mauler. Tanaka double-blocked with Defender and Zombie, losing the Defender. He hit with the Zombie and then tapped six.

Exalted Angel. The crowd gasped. Fujita rolled his eyes. He needed outs, and fast. He hit with his Murlodont, knocking Tanaka to nine, and readied a Patron of the Wild. His five mana meant it would have to wait until next turn to help the Buzzard finish off the Angel. Fortunately, Tanaka didn't have a trick, and the Angel dropped. The scores were fourteen to three. Tanaka finished off the Buzzard with Crown of Suspicion. If Fujita couldn't answer the Zombie, he was done. 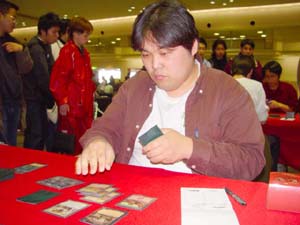 Fujita drew, played a land, and passed it back. Tanaka sent the Zombie. Fujita flipped up his Sandskinned morph: Fallen Cleric. That seemed to turn the tide. All Tanaka had was a Wall of Hope, and Fujita started dropping beasts. First Needleshot Gourna, then Symbiotic Beast. Tanaka drew blanks. When Stag Beetle hit play as a 10/10, Tanaka knew to pack it up.

Fujita pulled up his hand for Game 3 and paused. Six land and a Goblin Turncoat. He wanted to keep it, hoping for spell draws, but he couldn't bring himself to do it. He sent it back, and his reward was a one-lander. He went to five. Tanaka remained impassive.

His two lands found a third on the third turn, but it was Barren Moor. Tanaka got a morph on the board, and then answered Fujita's once-amplified Embalmed Brawler with Daunting Defender. Fujita found a fourth land and went for Screeching Buzzard, hoping for a fifth to let him have his Fallen Cleric. In the meantime he took a fair bit of damage.

When his fifth land wasn't forthcoming he morphed the Cleric, and lost it to Shock. Gluttonous Zombie joined Tanaka's team, and he uncloaked Boneknitter to save it from the Embalmed Brawler. Though Fujita managed to stop the Daunting Defender with Patron of the Wild, Tanaka had been growing an airforce, and Fujita was soon facing doom on too many fronts. He scooped rather than wait for the end.