Round 12: Jakub Slemr vs. Martin Grimm 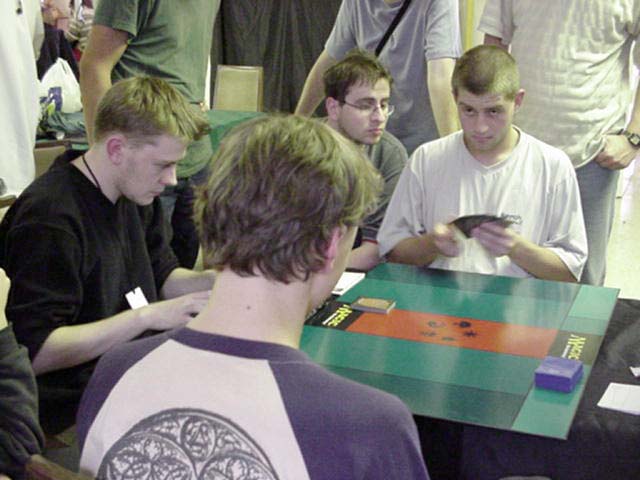 Martin gave an indication of what colour people are preferring to play. "They ran out of Forests so the judge told me to use Plains as proxies." Martin started but had to take a mulligan. He started off with a Druid Lyrist; but only on turn three, as he had just drawn it. Slemr had a pair of Patrol Hounds and a Dusk Imp, while Martin added a Leaf Dancer.

The ground became seemingly stalled when Grimm played a Dirty Wererat, but Jakub attacked with everything anyway. His trick was to Afflict the Wererat after it blocked a Hounds, and this set Grimm's defenses back a bit and put him on ten life. Unwilling to block the Patrol Hounds, Martin chose to attack with the Lyrist and Leaf Dancer before casting Patriarch's Desire on Jakub's flyer.

Another beating from the Patrol Hounds put Martin down to six; and he had to cast Moment's Peace just to survive for a turn after Slemr removed both his potential blockers with a Patriarch's Desire and a Ghastly Demise. He didn't draw anything that would let him deal with three creatures, and after playing the Flashback on Moment's Peace he had to acknowledge defeat.

Jakub's deck seemed to be quite fast with cards like Patrol Hounds and Fledgling Imp not being that good normally, they are fine in an aggressive deck, especially when he has the removal to back them up. 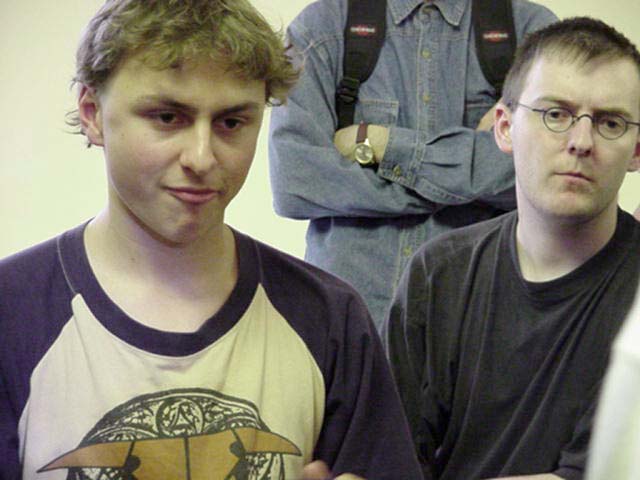 Unfazed by Jakub's lightning quick draw, Martin still chose to go second and managed to draw a better hand. This time when Jakub busted out a Patrol Hound and a Fledgling Imp, Martin had the incredible Call of the Herd to make two 3/3 tokens in a row and go on the offensive himself.

Martin only had Forests in play, but this didn't seem to hurt him too much. Jakub dealt with one Elephant token by blocking with Patrol Hounds, casting Afflict and then giving the Hounds first strike. Martin played a Springing Tiger as well and Slemr had to double-block just to kill a token. The Czech player then cast Morbid Hunger to kill a token and leave the board empty except for Grimm's Springing Tiger.

All of Jakub's double-blocking had left him with few cards in hand, and he had no answers as Grimm played a second Springing Tiger anda Krosan Archer; One all.

Both players had turn-two creatures this time Skyshooter from the German, and of course the omnipresent Hounds from Jakub. Slemr missed a land drop on turn three and Grimm played a Leaf Dancer. Luckily for Jakub he at least drew a land on his third turn to stay in the game.

Martin dropped a Krosan Archer and started attacking with it, while Slemr was stuck on three lands, and only managed to play another Fledgling Imp. The game was turning ugly for the Czech as Martin played a Metamorphic Wurm as well. A double-block killed the Wurm and now Jakub finally drew his fourth land, although he was down to eleven by this point.

Jakub had a Fledgling Imp and a Dusk Imp, and Marting had a Diligent Farmhand, a Leaf Archer, a Skshooter, and a Krosan Archer. The Dusk Imp blocked the Leaf Dancer and was killed by Skyshooter, and Grimm summoned a Wererat. Jakub killed the Dancer with Patriarch's Desire and the Archer with Ghastly Demise, but couldn't deal with the 4/5 Wererat. After taking a hit to go down to one, Slemr had to cast Morbid Hunger just to stay alive, but he began to mount a remarkable comeback.

He summoned a Repentant Vampire and kept using it to destroy the Wererat. Grimm only had land to complement his Rat and so he regenerated it every turn. Meanwhile Jakub cast another Morbid Hunger, this one at Martin, putting himself to a reasonably safe seven, and started to attack himself with the Fledgling Imp.

As Martin continued to draw land, Jakub kept throwing spells at him, and a third Morbid Hunger sealed the end for the German.