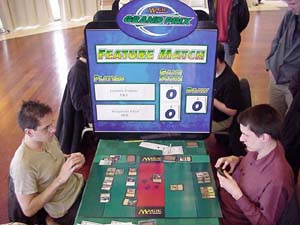 With both players still in contention for the Top 8, they skip the usual pre-game formalities and get straight down to business.

Both players open with Swamps but Frédéric, going second, makes the first play: a Fright Crawler. Jelger answers with a Cartographer. The game settles down with both players exchanging damage. Frédéric's Merfolk Looter gets Ghastly Demised but his second remains unscathed and promises to greatly improve the Frenchman's game if it continues to loot unopposed. Jelger answers with a Metamorphic Wurm, backed up with a Crashing Centaur: a deadly combination that will both gain him threshold and simultaneously, two great creatures.

Frédéric responds by an Aether Burst on the Centaur before untapping and laying a Dirty Wererat and a Rotting Giant. With hopes of mounting a decent defense so that his Looter can steadily bear him to victory in the long game.

Instead of replaying the Centaur, Jelger makes a Wild Mongrel, said by many to be the best green common in Odyssey. This leaves him with four mana open, enough for another greatly feared card - Elephant Ambush.

In Frédéric's next turn he calls Jelger's bluff and attacks, daring him to have the Ambush. Alas for Jelger, he doesn't have the elusive Elephant and can only change his Mongrel Black to kill the Fright Crawler. Frédéric has definitely taken the offensive in this game, almost certainly because of the Looter's card advantage. He follows up the attack that knocked Jelger to nine, with a Morbid Hunger on the Wurm, which gives him enough life to sustain his attack for another turn in safety.

Jelger casts an Elephant Ambush at the end of Frédéric's turn and replays the Centaur in his main phase. His attack takes Frédéric to eight and passes the turn, safe in the knowledge that although Frédéric has card advantage, he has board control; considered by many to be more important in Odyssey limited.

Frédéric's Loots away a Repentant Vampire, which would seem a very powerful card the way the board looks at the moment, in favor of a Concentrate, which successfully nets him three additional cards.

Both players have threshold and as the dust settles from Jelger's latest attack, only his Centaur and Frédéric's Dirty Wererat are left standing. Not realizing that the Wererat can no longer block, Frédéric mistakenly takes five damage, lowering him to the scary figure of three. It's all over the next turn as Jelger swings for the win with his trampling Centaur overcoming the hasty defense Frédéric attempted. It pays to make a mistake at such a high level of competition.

Frédéric opts to go first and opens with an Island. For the first three turns neither player does anything except lay Land. Frédéric's first creature, a Dirty Wererat, is desperately Refreshed by Jelger in the end step in a frantic attempt to draw cards, to get out of either his mana screw or flood.

Jelger either has or bluffs a Beast Attack on his turn five as he continues to do nothing. Frédéric plays a Whispering Shade and neglects to attack in fear of the potential instant speed creature that Jelger probably has at his disposal. Jelger's first critter of the game is a Nantuko Elder leaving him with only three mana left open, a bizarre play and a sure sign that he has drawn very poorly this game. 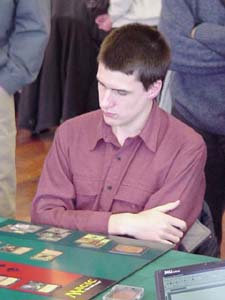 Frédéric takes this opportunity and Patriarch's Desires his own Wererat and takes his men to the Red Zone, dropping Jelger to fifteen. He then lays a Fright Crawler and is done.

In Jelger's turn, he makes a Metamorphic Wurm and is done. Frédéric continues to attack and is surprised when the Elder blocks his 4/1 Wererat before tapping and aiding an Elephant Ambush token into play. The Wererat is regenerated by discarding an Afflict. Jelger is now at eleven and when he finishes his turn he has a Nantuko Disciple, Wurm, Krosan Archer and an Elephant facing Frédéric's Wererat, Shade, Crawler and recent Rotting Giant.

The board appears to have nearly stabilized, yet Frédéric continues to lead his seemingly desperate offensive by attacking with all of his creatures. Jelger's only response to the Alpha strike is to trade his Disciple for the Island with which Frédéric's Wererat is regenerated. Jelger untaps on only three life facing Frédéric's daunting twenty. Not one to turn down a challenge, he calmly casts Overrun and attacks with the Elephant, Wurm and Archer. A card is discarded to the Archer giving him threshold and he deals a phenomenal 21 damage in one attack phase, impressive. He diligently played the entire game and was rewarded for his good play with a win.