Round 12: Jens Thoren vs. Don Gallitz 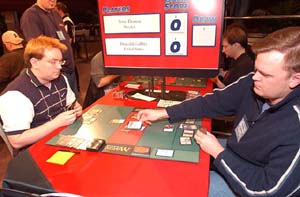 This was a match between two under-appreciated stars, battling for their first Top 8 in a Pro Tour. Gallitz is a Pro Tour veteran with plenty of credentials, but still no Top 8 finish to his name. The question of "Who is the best player to not make a Top 8?" changes with every Pro Tour, and right now Gallitz seems to be the best case for that distinction. Thoren is widely considered by many players to be the most underrated player on the Pro Tour. The winner of this match will be in a great position to make Top 8, and will no longer have that achievement missing from their resume. Thoren certainly has the upper hand here as his deck contains two Shower of Coals, while Gallitz's deck is not entirely impressive due to fighting over colors at the table.

Thoren played two Eggs in a row, and brought out Mad Dog, taking a point of mana burn. Gallitz answered back with Phantom Whelp, which traded with Thoren's Dog. Halberdier was then summoned by Thoren, and enchanted with Kirtar's Desire, while Puppeteer showed up on Gallitz's side. Thoren simply played a third Egg, while Gallitz summoned Treetop Sentinel. Thoren missed his fifth land drop, and ended his turn. Gallitz's Sentinel started to attack for two a turn, and Thoren brought out Wild Mongrel. 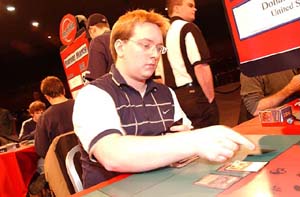 The Egg was now cycled, and Pardic Firecat hit the board. It attacked along with the Mongrel, and Puppeteer untapped the Sentinel, which blocked Wild Mongrel. Thoren discarded Demoralize to make the Mongrel 3/3 and black before damage, but Gallitz had Aether Burst. The Sentinel continued to attack, and Gallitz stabilized the ground further with Dreamwinder. Thoren cycled Refresh on Gallitz's end step, getting one card away from threshold. It became apparent that Thoren probably had Shower of Coals, so Gallitz used Dreamwinder to turn his mountains into islands for the turn. However, this only delayed the inevitable. Shower of Coals came down on the following turn, wiping out every creature on Gallitz's side, and clearing the way for Thoren's attackers.

Gallitz now started to rebuild, summoning Gravedigger to get back Treetop Sentinel. He then summoned Auramancer. None of this mattered, as Thoren calmly untapped and played a second Shower. Gallitz simply looked at the card on the table, leaned back in his chair, sighed, and scooped up his cards. His shuffling process for the next game was done with quiet anger, as he slammed his pen on the table and threw cards down on top of each other at a frenetic pace. By comparison, Thoren was quiet, calm and collected.

Thoren brought out a first turn Diligent Farmhand, and dropped two Eggs. Gallitz mentioned, "I don't feel too bad about this card anymore" and cast Words of Wisdom, allowing Thoren to dig deeper into his deck, which would allow him to get to Shower of Coals easier. He then played Phantom Whelp, while Thoren cracked the eggs to get the red mana he did not have, and brought out Ember Beast. Gallitz summoned Resilient Wanderer, holding off the attack. Kirtar's Desire slowed down Ember Beast and Gallitz cast Peek, seeing Shower of Coals, Mad Dog, Chainflinger, forest and an Egg. Thoren then drew and played Crashing Centaur. Puppeteer joined Gallitz's side, as Thoren cycled a third Egg to get close to threshold. 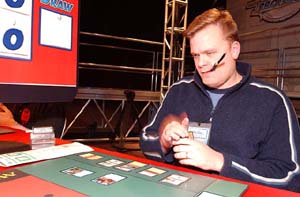 Psionic Gift was now played on Resilient Wanderer. It shot Chainflinger once, untapped thanks to Puppeteer, and shot it again to kill it. Shower of Coals then killed off Puppeteer, Phantom Whelp, and dealt four damage to Gallitz. The Centaur became larger than life with Threshold active, and attacked for five. It attacked on the following turn and was given trample, while Gallitz blocked with Wanderer, and discarded Aven Windreader to give it protection from green. This kept the Wanderer alive, but Gallitz still took two points of trample damage.

Gallitz took down the Centaur with the help of a triple block. The board was now stabilized, and Gallitz was shooting away at Thoren for one point of damage per turn. It didn't matter, as Thoren drew his second Shower. Gallitz picked up his chair and jokingly raised it in the air, but then put it back down gently.