Round 12: Jon Finkel vs. Bob Maher

Back at Worlds in 2000, Jon Finkel and Bob Maher met in the finals, putting an exclamation point on their Magic careers, and establishing themselves as two of the game's top stars. Since then, their careers declined a bit, with Finkel's apathy and Maher's six-month suspension making them look more like past icons than feared competitors. This season, however, both players came back with a vengeance. 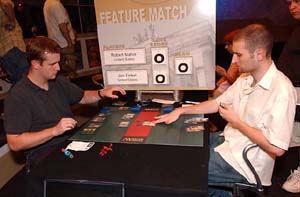 Maher made Top 4 at Pro Tour Boston, then Top 8 at Houston, in addition to winning two Grand Prix and making the finals of another. Finkel actually fell off the Pro Tour gravy train, but revived his career with two Pro Tour Top 8's. Without a doubt, both players are back in top form. As they sat down, talk turned to the man who tends to overshadow even the best of players.

Maher- (rolls eyes) "I hope he loses this round."

Finkel had a first turn Deftblade Elite, and Maher played Wirewood Herald. It got through for a point of damage, and was joined by Smokespew Invoker. Finkel added a morph to his side, which blocked the Herald on the following attack. Primal Boost was cycled to make the Herald able to kill the morph (Gravel Slinger), and Maher searched up Stonewood Invoker. At this point, Finkel decided to attack and provoke the Invoker to force a trade, a play that he avoided for a few turns prior.

Maher played Stonewood Invoker followed by a morph (Spitting Gourna), which died to Finkel's Scattershot. Maher attacked for two, and played Soul Collector. He was afraid of Dragon Roost once Finkel got to six lands, but only saw Noble Templar come out. Dragon Shadow went on the Invoker, and Maher's team got through for six damage. At this point, even Jareth didn't help Finkel, as it couldn't stop Maher's six points of evasion damage on the board. 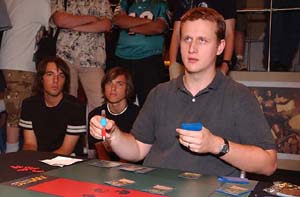 Maher played Stonewood Invoker turn two, and Finkel missed his third land drop. Maher kept pace with a morph, and after cycling Spark Spray, Finkel found his third land. He had already lost a significant amount of tempo, however, and had an uphill battle ahead of him. Maher unmorphed Soul Collector and attacked for five, while Finkel played a morph (Defender of the Order) that blocked and traded with the Invoker.

A face-up Zombie Cutthroat gave Maher another significant creature, while Finkel was still stuck at three lands and simply played a morph. Needleshot Gourna got a smile out of Finkel, who conceded.