Round 12: Jon Stern vs. Richard Hoaen 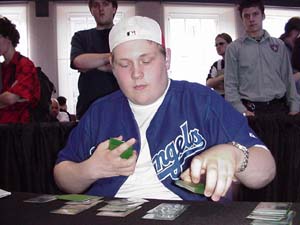 Ideally, these two giants would be sitting across from each other with the title on the line. Last year they crossed swords in the Top 8, with Stern emerging the victor on his way to a second-place finish. They both put on a good show at Yokohama, with Stern finishing eighteenth, and Hoaen eighth. Now the winner of this match will advance to Sunday, while the loser will be reduced to spectator status. Whatever happens, you'll get to watch for these two teaming together with Gab Tsang at the upcoming Pro Tour – Boston.

Stern mulliganed a questionable hand, but was rewarded with an acceptable six. Hoaen likewise went down to six, and they were off.

Stern opened with Krosan Verge and then Compulsion. Hoaen was ready with Force Spike. Already their match was drawing a crowd.

"Oh my God! He turned his hat! Just like in Pokémon!" – David Rood

Stern cycled Renewed Faith on his fourth turn. Hoaen dropped his fourth land and played Deep Analysis, cringing and hoping that Stern wouldn't punish him for tapping out. Stern played a second Verge as his fifth land, and passed it back. He countered Hoaen's attempt at Compulsion. He Verged, and Hoaen waited. He tried a Cunning Wish. Hoaen allowed it. It got Seedtime.

With seven mana, Stern tried for Mirari's Wake. Hoaen countered. Stern thought, and then went for the Seedtime. The Force Spike jumped out of Hoaen's hand.

Again Hoaen sat on his mana. Stern tried a second Wake. Hoaen played Circular Logic. Stern Lapsed his own Wake. Hoaen let it happen. Stern tried again the following turn, and met another Logic. Both players passed for a turn, their hands depleted. Stern tried a face-down Angel, but Hoaen just Spiked it to bring Stern down to three mana, and then Smothered. Stern immediately recognized his error in not playing it face-up.

So they sat and stared at one another. Stern got a Mirari and activated another Verge. Soon after Hoaen was asking how many cards Stern had in hand. Sure enough, he played Upheaval and floated Psychatog mana. Stern didn't press the issue and scooped.

"I run the peek at every opportunity." – Richard Hoaen 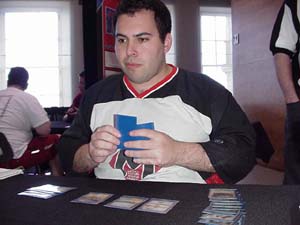 Stern led with Krosan Verge, and was exposed by a Duress from Hoaen. He had two forests, a Lonely Sandbar, Memory Lapse and Counterspell. Hoaen took the Lapse. Stern played the Sandbar, letting Hoaen bust out Compulsion. Stern played his third land and a morph. He waited for a Smother from Hoaen, but none came. He just played his third land and was done. If Stern could draw a white source, he could steal this game.

Stern tried another morph, but this one got busted up by Logic via Compulsion. Stern shrugged as he drew the third and final forest in his deck. Waiting on the Krosan Verge had turned around and bit him. He wasn't drawing the tools he needed to fight Hoaen. Hoaen meanwhile resolved a Deep Analysis and found himself a Smother, removing Stern's offense. A pair of Duresses stripped Stern's hand, and it wasn't much longer before Hoaen was in total control. The endgame was as you'd expect.