Round 12: Jordan Berkowitz vs. Josh Wagener

Many expected Jordan to sit alongside Josh on the U.S. National Team, but Justin Gary took his place in an upset victory. Jordan has had an incredible year so far, and shows no sign of slowing down. Josh and Jordan are rooming together here in Atlanta and playtested this match quite a bit last night. 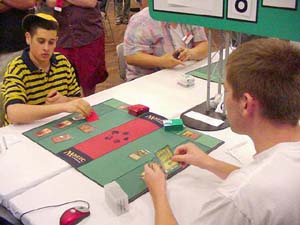 "He's the luckiest person I know," Josh said of the playtesting. Josh then stared at the cards in his hand for several moments, before finally deciding to mulligan.

"One land and two Birds," he pondered aloud. "Would you have killed my first turn Bird," he asked Jordan.

"Probably," Jordan responded. "To be honest."

After picking up his six new cards Josh looked across the table at Jordan.

"Is five too low to go," he questioned after seeing his new six cards.

"You can't win if you go to five," Jordan responded.

Berkowitz led with Sledder, Josh with Rootwalla. The Sledder swung on the next turn and Josh blocked it with the Basking Rootwalla. Both players looked like this was they expected, as if playtesting proved this was the only way to go.

The Sledder was replaced with a Raging Goblin and a Goblin Piledriver, and they started swinging the next turn.

The tide of rolling red death was paused briefly when Josh was able to kill the Piledriver with Volcanic Hammer. Jordan was unconcerned though, as he'd been holding Goblin Goon back in his hand.

"You are sooooo lucky," Josh said as he started looking at the top few cards of his library. The two competitors were off to Game 2.

Turn two Josh played a Wild Mongrel to go with his lands, as Berkowitz went Sledder and Sparky on consecutive turns. The turn two Sparksmith always has the potential to dominate games, but with the Mongrel on the table people were wondering how many times Jordan could afford to use the ability. 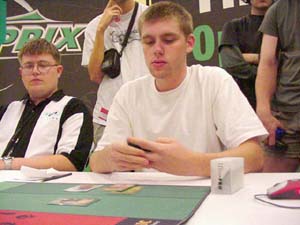 The stalemate between the two continued until Jordan tried to play a Goblin Sharpshooter. Josh said that he had responses, then discarded Violent Eruption to his Mongrel, using it to blow up the Sledder and the Sparksmith.

The following turn, Josh added a Phantom Centaur to his army, dominating Berkowitz's meager board of Sharpshooter. Jordan had all the answers. He used a Firebolt to kill the Mongrel and then went to work on the Centaur. Two activations of the Sharpshooter ability and another Firebolt ended the life of the Centaur.

Josh killed off the Sharpshooter, trying to make sure that he could keep some of his smaller creatures alive through it. Then, the match stopped.

Neither player did much of anything except draw cards for the next several turns. Finally, Josh broke the stalemate by playing Call of the Herd. An Elephant token landed hard on the table, but was burned off of it by a Volcanic Hammer. A second Elephant token came to the table, but died in the same way.

Firebolt killed off another Sharpshooter for Josh, but it was replaced with a Sparksmith from Jordan.

"I feel like I have a really good draft deck," joked Jordan.

A Grim Lavamancer landed on Josh's side of the table, followed by an Elephant Guide to make him big. Jordan calmly cycled a Gempalm Incinerator in response, thinking to kill the Lavamancer. Josh responded to the cycle by killing the one goblin in play so that Lavamancer lived.

It didn't live long, as Jordan killed it soon after to put an Elephant in play.

"Threaten would have been insane there," Josh mentioned as they shuffled up for Game 3. "How many do you guys play?"

Jordan kept a one land hand without a one drop in it, and passed on his second turn with no activity. Josh, on the other hand, had things working his way with a turn two Mongrel.

Mongrel was joined by its Elephant guide and the beatings are on. Jordan could do nothing but take the five damage the now sizable Mongrel delivered to him. Goblin Warchief joined Jordan's side, and he surveyed the table, asking Josh how many cards he had. 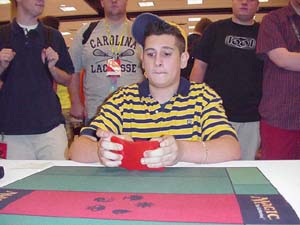 "Two," said Josh. "How many of them do you think are Violent Eruptions?"

"Zero," Jordan responded. On the one hand he had to be worried about the Violent Eruption, but he also couldn't let it decide for him how he would play the game.

Jordan started to verbally try and figure out the rest of the game. Josh only had one red available, so the Violent Eruption was out. Hammer and Firebolt are sorceries, so they were out. If Josh was holding a Basking Rootwalla though he was in good shape to win this game.

Jordan dropped another Goblin Piledriver to go with the first one and the Goblin Warchief that was already in play, sending the three of them into the Red Zone. Josh didn't miss a beat as he just set the Moment's Peace on the table.

Jordan played a Goblin Incinerator. Unable to kill the Mongrel he would just need to be able to chump it and work around it for a while. He was at five life, and the Guided Mongrel could win this game in one swing.

Josh looked at the top card of his deck, peeking at it in an Orcish Spy like way. Happy with what he saw, he flipped it over the crowd to see. The Volcanic Hammer landed on the table face up and was set at Jordan's Incinerator. Blocker out of the way, Jordan could do nothing but die as the Mongrel smashed into him one final time.