Round 12: Jordan Berkowitz vs. Paul Rietzl

It has been a very long draining weekend for Paul Rietzl and he was starting to show some wear around the edges. For the second straight round he found himself in within a win of the Top 8. He lost two demoralizing games to Mike Turian with sub-standard draws. 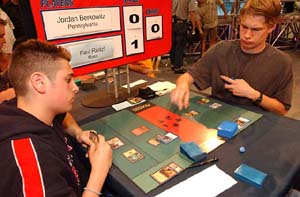 "Let's try this again..." sighed Rietzl. He is facing the same match-up as last round—card for card. Berkowitz is a member of the CMU/TOGIT team that developed this techy Green-Red Beats deck. Rietzl is one of the rising young stars of the YMG team. The two East Coast based teams are developing a healthy rivalry that has lent still more drama to the last two rounds.

While they were being deck checked, Jordan paced off his nervous energy. Rietzl stayed at the table and thought about how to approach games two and three. "At least I know how to sideboard now—I brought in Turbulent Dreams because I thought they had Ensnaring Bridge but they don't. That means I get to bring in more Stupefying Touches for their Lavamancers.

The newest member of the YMG squad—Ed Fear—came over and laid out the probabilities of each player making the Top 8. All of the twenty-seven point players had drawn. Paul was likely in as long as he won. "Anyone with twenty-four points has a decent shot but if you and Tom win you should both be seventh and eighth."

Paul tried to remain impassive as they started the match after the sterling deck check. "Haven't been in this position before have you? Nervous?" Berkowitz probed looking for a foothold but Rietzl just shrugged. Berkowitz shifted gears, "It's quite a rush, huh? On the edge?" Nothing. "No emotions?"

Paul had the first play despite being on the draw—a Wild Mongrel. When Berk tried to Hammer it he saved it by discarding Roar and Wonder. He got in for two and played an Aquamoeba. Phantom Centaur came down but could only gaze skyward as the two madness outlets flew by for five. A flashed back Roar of the Wurm threatened to make short work of Jordan.

The Centaur got in for five but a flashed back Deep Analysis meant that Paul could put lethal damage on the stack next turn.

"You had a GOOD draw that game, huh?"

Rietzl snorted—still sore from round eleven, "BDM can tell you that I need to go Careful Study discarding two Rootwallas to EVEN out my draws against Turian!"

Jordan fidgeted in his seat waiting to play and even pulled out his trademark (infringement) toothpick that carried him into the money in Venice. Rietzl rolled his eyes, "Should I bring out a toothpick too?"

Jordan scoffed, "Get out of here you poser!"

"Actually, I'm ten. How's that gonna feel when you lose to a ten year old?"

Berkowitz had the Foothills/Lavamancer opening. Paul had the Careful Study and Jordan wanted to see the double Rootwalla, "Here it comes..."

"I'm just going to slow roll this if you don't mind." Paul only had one Rootwalla and discarded a City of Brass as well. Jordan's Wild Mongrel made a handy target for the sideboarded Stupefying Touch. Jordan was stuck at two lands and swung in with his ersatz Grizzly Bear and had to spend mana to play his Rootwalla. 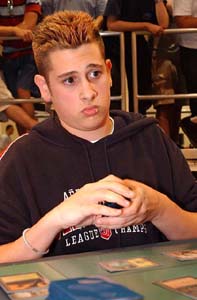 Rietzl got in for one with his lizard and played an Aquamoeba. The blue beast was Volcanic Hammered and another Rootwalla jumped into its place. Paul fell to sixteen but was keeping pace thanks in part to Jordan's fetch lands. A Phantom Centaur came down next turn and things were looking mighty grim for Jordan, who was only now on three lands. He missed another land drop and put a Llanowar Elf down to eat a counter from the Centaur—and it did. Another one went away EOT when it was shot with the 1/1 wizard.

Still no lands for Berkowitz and he played a Rootwalla. The YMGer kept the pressure on and swung his vanishing centaur into the red zone. The Lavamancer jumped in front and took a Rootwalla down with them but Paul had Studied an Arrogant Wurm into play.

STILL no land for Berkowitz but he played another Lavamancer. Paul made another Wurm off of a Careful Study and sent his first one in to scuffle with the fixed Wild Mongrel and a Rootwalla. When Jordan pumped the lizard, Paul returned it to Berk's hand with an Unsummon. A titter from the spectators alerted Paul that he made a play error. He forgot to assign trample damage over the Mongrel.

The Rootwalla came down again and Paul sent both Wurms into battle. Berkowitz blocked and did three to one but Paul had another Unsummon to save it when the Lavamancer tried to finish it off. Now Berkowitz was drawing land and he played a Windswept Heath—he fell to ten—and played a morph. Paul sent in the Wurm and a Rootwalla and it traded with a Firecat—Berkowitz fell to six from trample and painlands.

A Wooded Foothills and a Karplusan dropped him to four when he Violent Eruptioned the Wurm. Paul had ANOTHER Wurm and Berkowitz played a Centaur—the two points of missed trample damage were clearly weighing on Paul's mind. He studied into a Rootwalla but he couldn't break through the Centaur.

Berkowitz attempted a Firebolt but it was countered. Paul had one remaining card after playing a Wild Mongrel. Berkowitz 'duressed' the last card by shooting the Mongrel EOT—it was a land. Jordan promptly finished it off during his mainphase and played a Rootwalla. Paul ripped a Wonder off the top. It fell to the Lavamancer and was eliminated as a threat with Krosan Reclamation when Paul attacked. He played a Looter.

The Looter was Firebolted and Jordan fell to a tantalizing three to flash it back and finish off the Wurm with a Lavamancer. He drew a call of the Herd on the next turn and that was enough to finish off the stunned Rietzl.

"You are soooooooooo lucky that I am awful—those two points," Paul tried to focus for the crucial Game 3, "C'mon Paul!"

Berkowitz was feeling confident after his remarkable, toothpick fueled comeback, "I didn't think I had a shot during that entire game. I just knew I had to play perfectly—"

Paul finished the thought"—and hope I 'effed' up, I know!"

Both players kept their openers but Paul debated and fussed before doing so. Berkowitz wasn't buying it, "Your hand is probably insane—you tried that act the first game." 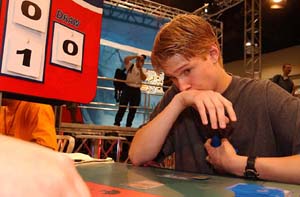 Paul had the Careful Study but decided to wait a turn with nothing exciting to discard in hand. He played the Looter on turn two following Berkowitz's Rootwalla. Berk got in for a point and made an Elf. With no green mana in sight, Paul Looted and used the Careful Study to find a City of Brass and play Wild Mongrel. Berkowitz looked to be in good shape and played a turn three Phantom Centaur.

Paul unsummoned and sent in the dog. When Jordan replayed the Centaur it was 'dismissed' with the Looter and a Logic. Paul Looted and Studied again—yielding a Rootwalla and pitching a Wonder but Violent Eruption wiped out the lizard and the Merfolk.

Paul was holding four lands and he could see his glass slippers about to shatter. When Berkowitz played a Call of the Herd and flashed it back it all but sealed the deal. A face-up Firecat on the next turn left Paul at five.

An Arrogant Wurm off the top wasn't the miracle Paul needed. The feature match erupted with jubilant CMU/TOGIT supporters while the YMG crowd drifted in to offer sympathetic words to a crestfallen Paul Rietzl.

Tom Guevin had won his match and now it was all up to the tiebreakers to determine who would make it.