Round 12: Kai Budde vs. Andrew Johnson 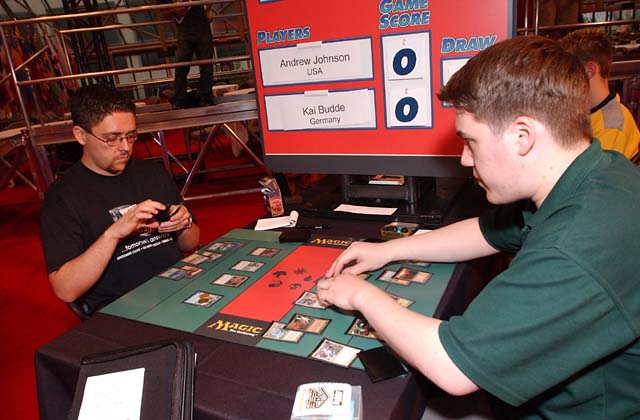 During the draft, both Kai and Andrew drafted strong decks -- Kai's a 5-color that made amazing gains during the Apocalypse packs, and Andrew's a solid blue-white with a splash of red for three of the best spells in the block: Illuminate, Magma Burst, and Scorching Lava.

Yet both were 0-2 with these decks. Kai was particularly annoyed, having lost a match to Markus Jobstl's Maggot Carrier - Sleeping Potion marvel. Asked to explain their decks' underperformance, both pros did an amazing impersonation of this very reporter when he protests his own decks' unwillingness to play nice and show the right lands and/or cards. It does sound rather more credible coming from players of their caliber, however.

Andrew went first, and both players kept their opening hands, throughout the match.

The first game, Andrew started strong, with an early Benalish Trapper, Samite Pilgrim, and Rith's Attendant. Perhaps a bit surprised that he was playing the control deck in this matchup, Kai laid out a Mirrorwood Treefolk and Stone Kavu to stop the madness. While Andrew added a Faerie Squadron, Kai added a Sunscape Apprentice, Angelfire Crusader, and Thornscape Apprentice, as well as a second Stone Kavu. Soon, these creatures were swinging, and through some Trapper and Pilgrim manipulations, Andrew could only contain part of the damage as he went down to 13 life to start his ninth turn. 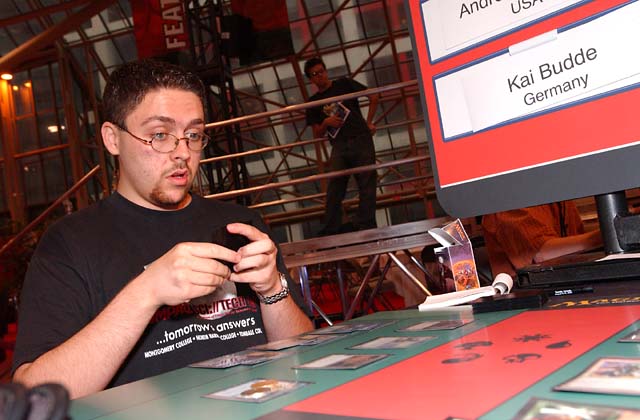 That turn, he finally drew the mountain he needed to play Illuminate (no kicker), and he roasted the Thornscape Apprentice for three, fearing an Explosive Growth in Kai's hand. (Andrew later admitted that his fear of the Growth was too strong that game, since he assigned blockers more fearfully than he should have in the mid-game.)

Adding an Amphibious Kavu to his cause and taking Andrew down to 8 life, Kai must have been pleased to see the Faerie Squadron, for which he had limited answers, pinned on defense for the remainder of the game. Andrew spent eight valiant turns using a combination of Magma Burst, Quicksilver Dagger, Sea Snidd, Riptide Crab, Living Airship, Confound (on an Agonizing Demise), and everything else he could throw in front of Kai's advancing army; but Kai made two key plays that broke things open:

Sitting with two Savage Gorillas, a Mirrorwood Treefolk, and two Stone Kavu, Kai came through for fatal damage on his eighteenth turn.

For game two, there was less of a clear, long-term momentum swing from Andrew to Kai, and more of a furious back-and-forth that saw Andrew's Benalish Trapper, Samite Pilgrim, and Angelfire Crusader face down Kai's one-toughness club (Urborg Elf, Sunscape Apprentice, Quirion Sentinel, Dega Disciple, and Thornscape Apprentice, all out by the end of Kai's sixth turn). Fortunately for Kai, these were all protected by a Lashknife Barrier.

Andrew soon found enough beef, in the form of Rith's Attendant and Sea Snidd, to overwhelm Kai's Bloodfire bait. He also found a Magma Burst to get rid of the Apprentice and Disciple; but Kai used his Urborg Uprising to slowly bring them back in all of their miniature glory. 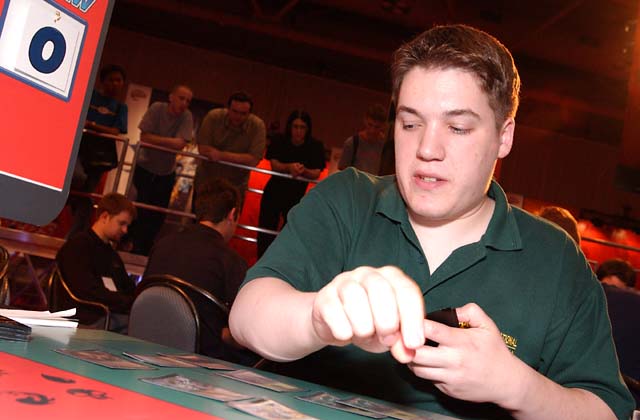 By this time, however, Andrew's beef had the probable Player of the Year down to four life (Andrew was at 12). The German was reduced to chump-blocking a Crusader with a Sentinel to avoid even worse damage. Realizing that a single Illuminate would force a game three, Kai was relieved to find an AEther Mutation at the top of his deck, and used Andrew's Sea Snidd to grow five Saprolings. This meant Kai had played, or put in play, eleven creatures (if you don't count the double recursion, otherwise it's 13), none of which had a toughness greater than one, or a power greater than two without the Dega Disciple's help.

On turn eleven, the game turned for real. With a rather carefree acknowledgement that he wasn't sure this was the right thing to do, Andrew continued to swing with his beef. Kai blocked it all with teams of Saprolings and elves, sending the Snidd and Crusader to the graveyard in exchange for a couple of tokens.

This ended up being decisive, as Kai could now swing with a couple of tokens, and pump whatever Andrew didn't block. With only a Samite Pilgrim and the Rith's Attendant to mind the house, the American soon found himself at five life. A turn 13 Coalition Honor Guard looked rather timely. But Kai tapped it with his Thornscape Apprentice, swung with enough weenies to bring Andrew down to two, and then played Magma Burst with kicker, which "forced" him to choose two targets: the Honor Guard and Andrew himself.