Round 12: Kai Budde vs Jim Herold 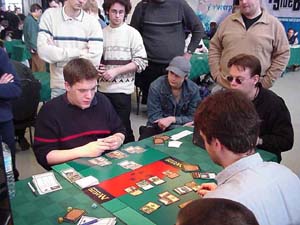 Kai Budde vs. Jim HeroldAfter smashing one member of Team Godzilla in the last round Jim Herold found himself paired against another in round 12. Only that player happens to be multiple Pro Tour and Grand Prix champion Kai Budde. Herold is no slouch himself with three Grand Prix titles to his name.

Budde started with a ridiculous turn 2 play when he discarded two Basking Rootwalla to Rites of Spring. Herold nipped off one Lizard with a Firebolt and used a second to remove Budde's Nantuko Blightcutter. By this time Budde had added a Possessed Aven to the assault.

Herold tried to use Temporary Insanity to trade Aven for Rootwalla but didn't have enough cards in his graveyard and wasted the spell. He flashed back a Deep Analysis to try and find an answer but none was forthcoming.

"I thought it was equal to or less," Herold explained afterwards about the play with Temporary Insanity. "I was lazy and didn't read the card. Never had it in a deck before."

Game 2 started out more in Herold's favour as he attacked through the air with a Skywing Aven and held off a Krosan Avenger on the ground with a Diligent Farmhand. An Otarian Juggernaut came into play on Herold's side and was Refreshed when Budde tried to trade it off for his Avenger.

A Firebolt burnt away a Blightcutter to leave Budde with just an Aven Fisher although he had a Circular Logic to save it when the Firebolt came back.

Herold just seemed to have the more tricks. When Budde blocked the Juggernaut with a Basking Rootwalla, Herold was able to remove it with a Flame Burst in response to it pumping itself.

When Budde summoned a Hallowed Healer, Herold summoned a Chainflinger. Budde was able to use Ghostly Wings to put the Healer out of ping range before the Chainflinger got active. He was still being beaten down by the Farmhand, Juggernaut and Skywing Aven though.

Budde wasn't really drawing anything good. Krosan Restorer and Cartographer weren't going to turn the game around and it was time for game 3.

Budde made Herold go first and lost his Farmhand to a Flame Burst before he had the mana to activate it. Herold managed to have all three of his colours out on turn 3 for the third time.

This time Budde was in the beatdown seat as he sent Basking Rootwalla and Aven Fisher into the red zone. 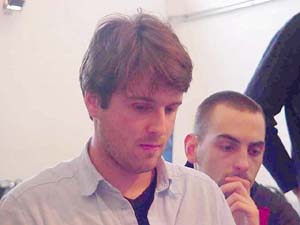 Jim HeroldA Deep Analysis was countered with a circular Logic but still netted some cards when Herold flashed it back. The extra cards fuelled a Devastating Dreams for two to clear the board and chop Budde down to two land.

He recovered quickly and dropped a Hallowed Healer. Herold gave it a Masticore's upkeep with Coral Net but Budde allowed it to hang around for a couple of turns, getting a Basking Rootwalla in for free and then giving himself threshold.

Herold dealt with the Rootwalla by blocking it with a Cephalid Aristocrat and Refreshing it. When he summoned a Wild Mongrel in his turn it seemed like the tide might be turning as Budde had only a Krosan Restorer and Krosan Archer in play. An attack with the Mongrel got rid of Budde's Restorer and emptied both player's hands.

Time for topdeck Magic and fortune smiled on Budde as a Possessed Aven was waiting on the top of his library.

Herold needed to match it with a similar topdeck. Firebolt would do the job but none were forthcoming and the fat flier finished Herold off in two turns