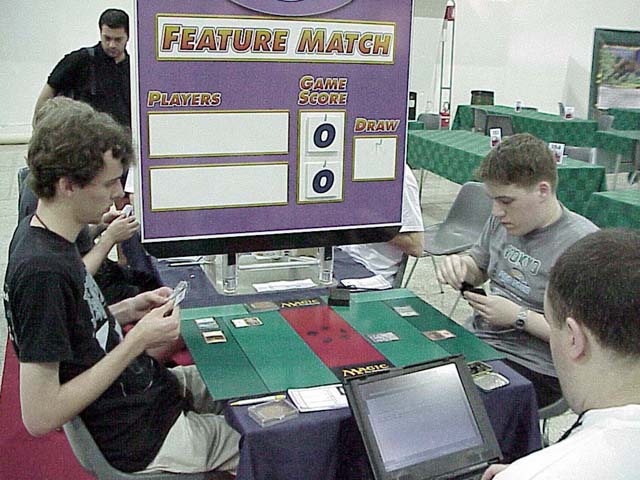 With both participants coming into this match at 9-2, both players knew that a win in this match would mean they could draw into Top 8. With Kai's knack for winning day 3 matches, that was a big deal for the rest of the field, but it was van de Logt, winner of Dutch Nationals, for whom the finish would be that much sweeter, with his last international top 8 coming just under a year ago at World Championships.

Kai's next spell came on turn three when he cast Phyrexian Rager with Crosis' Catacombs, but Tom countered with a gating effect of his own, casting Silver Drake before the Rager attacked, bringing the score to 18-19. After Ravenous Rats forced the discard of Stormscape Familiar, the Trapper rejoined the Drake and the table was set.

With Kai passing the turn without casting anything with his four lands, things were looking up for van de Logt, except his hand was devoid of strong spells, only mustering a Helionaut despite already having all of his land types in play. The Rats traded for Helionaut only to be replaced by Zombie Boa. A 4/6 Wayfaring Giant entered play for Tom, but the Giant was immediately dispatched by Stormscape Battlemage, with the ensuing attack reducing him to seven. A turn later, Tom went to four on the attack, and Kai's Magma Burst and Hunter were enough to finish the economics major off. 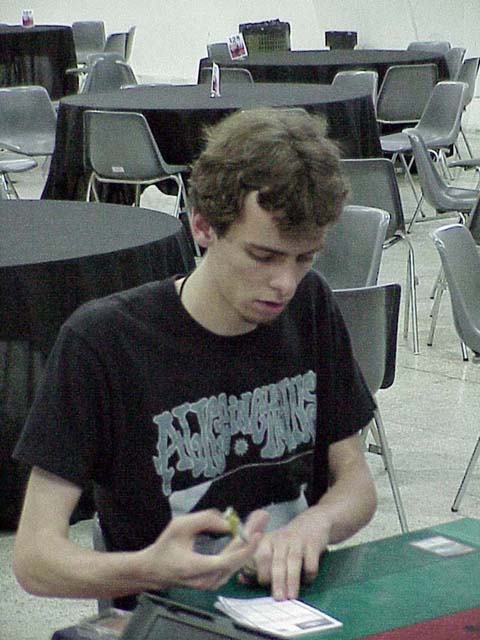 Amidst Kai's commenting on the fact he'd drawn all of his good cards, Tom chose to draw first in order to avoid mana problems, only to decide to mulligan anyways. The game started with Kai's second turn Rats making the mulligan hurt that much more, forcing Tom to discard Illuminate, but Kai didn't play a third land, and with only two Swamps, was forced to relinquish the turn.

After Tom cast Worldly Council, he untapped and played a third land, casting Sunscape Battlemage without kicker. After Kai drew a land and cast Morgue Toad though, Tom came out with a slightly better monster in the form of Lightning Angel, with the Battlemage and Toad trading for one another. Kai then cast Mournful Zombie, but it was of little use as Sea Snidd entered play. Finally, a creature of some merit, Trench Wurm came down, but it wasn't much help, with Living Airship joining van de Logt's side, as did Coastal Drake a turn later. With Kai unable to block any of Tom's flyers, he was forced to Magma Burst the two smaller flyers, but the Angelic problem still lingered, and a turn later, the game belonged to the Dutchman. 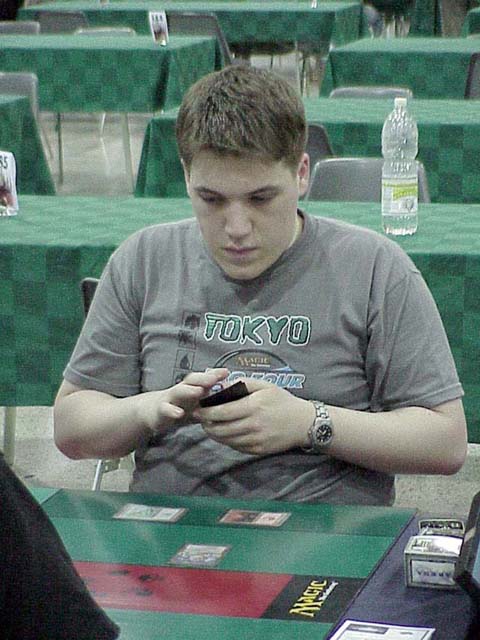 With Kai electing to play first, he came out fast casting Phyrexian Battleflies on turn one and enchanting it with Sinister Strength on turn two. The flies got in six points of damage before Tom's second turn Trapper became active, and were joined by a third turn Ravenous Rat. Tom's third turn saw him Shackle the Battleflies, with Kai casting Phyrexian Rager after playing his third land, but the three time Pro Tour champ could only sigh as Lightning Angel again hit the table on turn four, taking the score to 15-14. Kai attacked with the Rager for two and cast Phyrexian Slayer, suggesting he might have Magma Burst in his hand.

On his turn, Tom cast a main phase Worldly Counsel before playing a Plains and casting his sideboarded Honorable Scout, gaining him eight, putting the score at 20-12 in his favor. The Rat and Scout traded and Kai could do noting else as van de Logt continued attacking with the Angel, casting Living Airship. Kai, still stuck on four lands, was forced to Cursed Flesh the Angel so he might Burst it on his next turn, but he soon regretted it, with Tom playing Silver Drake, returning the Angel to his hand.

With Kai now at six life, it was time for drastic measures. Kai Burst the two remaining flyers knowing full well the Angel would be coming back into play, leaving himself with just three land. The Angel came out and reduced the Juggernaut to three, and a turn later, he conceded.