Round 12: Katsuhiro Mori vs. Yusuke Osaka

Some have billed this match as a battle of the Grand Prix's best dressed, but there's a lot of talent here as well. Yusuke Osaka is one of Hokkaido's best players, having attended a few Pro Tours. His opponent, Katsuhiro Mori, needs no introduction, having built a reputation of being one of the fastest players around. Officially, he had retired and was never coming back to the game, but we all know how easy those promises are to break. Now he's back and in the hunt for another Top 8. 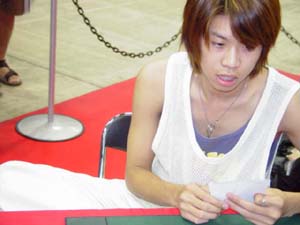 Mori busted out a traditional red-white opening of cycling Eternal Dragon, playing a morph, and then flipping up Exalted Angel to start the race. He was without red mana, but seemed no worse for it. Meanwhile Osaka had a slow start of turn three morph and then missed his fourth land drop. He was forced to Read the Runes for just two in order to find the land he needed. Worse, he had no Bidding. He turned over his Putrid Raptor and played a Carrion Feeder. He was severely outclassed in the race.

While Mori readied another Angel, Osaka dug with a second Read the Runes. It too turned up a blank. Mori came across for eight. Osaka had one more shot. It was not to be. Mori's Angels cruised to victory.

The first play of the game was Osaka's morph, a sideboarded Chromeshell Crab. Mori moved to play a morph of his own, but thought better of it, and played Astral Slide instead. Osaka added Graveborn Muse to his crew. Mori Shocked the morph, and now that the path was clear, played his facedown Angel.

Osaka bashed for three and played a second Muse, as well as a Carrion Feeder. Mori had quite a conundrum on his hands. He swung in, and when Osaka declined to block, let the damage stand at two. He Shocked the Carrion Feeder, and Slid out one of the Muses on his own end step, denying Osaka three more cards. Osaka played his sixth land and waited. 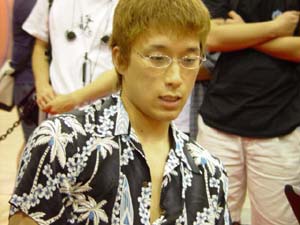 Mori finally turned up his Angel and hit for four, but it looked like it would be too late. Osaka had Read the Runes for five, sending a pair of Vengeful Dead to the yard among others. He untapped, hit for six, and played a mighty Bidding, with Carrion Feeders and Vengeful Dead providing the immediate kill.

Again, Mori had a turn four face-up Angel swinging for the fences. Osaka played it cool, starting with Nantuko Husk and then waiting on a Read the Runes for four. Mori added a Chartooth Cougar to his board, hoping to win before Bidding could be a factor. However, the blue instant sent a pair of Noxious Ghouls and a Rotlung Reanimator to the graveyard, and the Bidding that followed eliminated Mori's fighters. Mori had a timely Akroma's Vengeance.

His expression betrayed that he wasn't out of the woods yet. Sure enough, Osaka had a second Read the Runes to turn up yet another Bidding, this time for even more men. Mori had a Decree of Annihilation, but not the mana to hard cast it. He scooped up his cards.