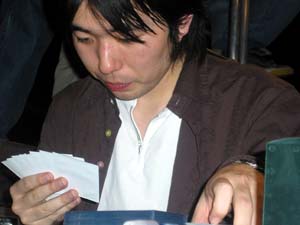 Nakamura was looking for his second Constructed Top 8 this season.

The best possible scenario for these two players would be return trips to Sunday for both of Japan's rising stars. Kenji Tsumura reached the semifinals of Pro Tour-Atlanta as a member of One Spin, while Shuhei Nakamura was a finalist against Pierre Canali in the inaugural event of the current season - as all you Red Deck Wins advocates out there are no doubt well aware.

While they were trying to figure out how the standings would be break, the Ruel brothers came over with a couple of deliveries. Antoine Ruel delivered the pink hat back to the Japanese contingent after it was passed around to the French all afternoon. Olivier delivered the bad news.

As best anyone could figure they were the only ones not just playing for an additional $1,500 for their bankroll. The winner of this match was heading for the Top 8 while the loser would come up just shy in the ninth spot. Both players gnashed their teeth and banged on the table - kiddingly, of course - when they learned that Gadiel Szleifer was the beneficiary of the bye into the Top 8. As much as they each wanted to make the Top 8, they wanted the other one to go as well.

I asked the two players about the deck matchup while they waited on their deck check. Both players felt that Tsumura held the advantage. Kenji's Itaru Ishida designed Gifts deck featured two Myojin and high-quality removal spells, which they agreed would trump Shuhei's creature based deck - yet another fiendish creation of Japan's resident genius Tsuyoshi Fujita.

The mana acceleration in this match was astounding, starting with a council of Sakura-Tribe Elders and followed by Kodama's Reach for Kenji. Shuhei used a less traditional combination of legendary artifacts and Honor-Worn Shaku. He was able to top into Keiga on his fourth turn.

Kenji had eight mana in play by turn five – I had entire draft matches Friday night without seeing that much land hit play over three games. Gifts Ungiven offered a selection of Horobi's Whisper, Kodama's Reach, Heartbeat of Spring, and Myojin of Night's Reach. He got the Reach and Myojin. By the end of turn five, there were 10 lands in play on his side of the board.

The dragon got his beat on. Kenji untapped stood up and windmill slammed Myojin of Seeing Winds onto the table and screamed, "And 'Boom!' goes the dynamite!" at the top of his lungs.

Okay, he did not actually say that, but he should have. He did put the 10-mana blue card-drawing machine into play on the game's sixth turn.

Keiga crashed in for seven more points and somehow Shuhei actually had more mana available to him than Kenji did. He had taken Kenji to eight with his dragon but Tsumura was about to untap and draw 12 cards. Kenji drew his cards and dispatched the dragon with Final Judgment. Shuhei restocked with Meloku. Kenji had the answers in hand but not before casting Cranial Extraction and naming Godo, Bandit Warlord and taking out the whole quartet of them. Final Judgment was next. 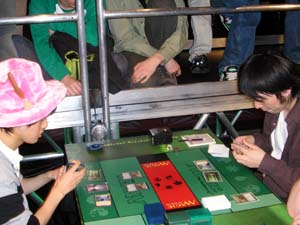 The last spot in the Top 8 was up for grabs.

Shuhei drew and played Jugan while Time of Need resulted in Meloku for Kenji, although he Topped for Heartbeat of Spring before playing it. Shuhei played another Jitte and attacked. Kenji returned a bunch of lands and quintuple-blocked the dragon to death. Shuhei played a Tribe-Elder after combat and handed it the Jitte. Had he played the Tribe Elder first, he would have had a 6/6 creature wielding a big stick.

Tsumura played Myojin of Night's Reach and Shuhei cashed in his Jitte counters to kill it before things got silly. He ramped up his mana with Kodama's Reach and attempted Keiga but Kenji had nothing but answers churning at the top of his deck as he Topped up a Time Stop.

The next Keiga resolved and it picked up the Jitte and swung into a token. After combat, Shuhei removed four counters to finish off his own dragon and steal Meloku. Not a problem for Kenji, who merely untapped and played Kodama's Reach splicing two Hideous Laughter onto it - not a sentence I ever expected to type.

Jugan stepped up to try its hand but it was removed with Final Judgment. Kenji also played a second Heartbeat, meaning he could make 52 mana if need be. The game was thrust and parry with so much of each player's lands in play and nothing but threats and answers waiting to be flipped up with the Top.

Shuhei mulliganed and agonized over his next six. He was looking at just one Tendo Ice Bridge for lands before shipping it back as well. He kept another one-lander on five but only missed one drop before finding his second to play an Elder and stay on par.

Kenji stalled for a turn on two Islands and a Top but the trusty artifact dug him to an Ice Bridge. Before long Shuhei was casting Kodama of the North Tree like he was a grizzly bear. Kenji was holding Final Judgment but held off for a turn and took six to develop his mana. He smoked the Tree a turn later. Shuhei was undeterred, and despite working with five cards on the play, was able to cast Godo, the Bandit Lord, search out Tatsumasa, the Dragon's Fang, and equip.

There seemed to be no end to the so-called Final Judgments in Kenji's deck and he smoked the Warlord and broke the tooth with Wear Away. He attempted Cranial Extraction but Shuhei had Hisoka's Defiance. Tsumura cast Stir the Grave for Sakura-Tribe Elder. 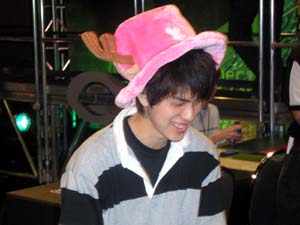 The pink hat will be making an appearance on Sunday.

Shuhei fired off Mindblaze and tried to recall all the numbers in the Ishida list. After looking everything over, he decided to call three Sensei's Divining Top and took Kenji from 14 to 6.

Kenji's Elder gave way to Ink-Eyes and it recruited another Elder from Shuhei's grumper. Ink-Eyes took another chunk and Shuhei was one attack away from dead. Shuhei responded to Cranial Extraction by doming Kenji with Glacial Ray - he dipped to four. Kenji named Mindblaze and got the last out of his deck after seeing another Glacial Ray in Shuhei's hand - Nakamura had only one Mountain in all of his in-play lands.

Shuhei had one turn to draw Kodama's Reach - he could cast it splicing Glacial Ray and get another Mountain to hard-cast the last two points - but it was not to be.

Kenji would be stepping into the Sunday spotlight for the second time in as many Pro Tours. Kenji came into Saturday's action with two losses on Day One. Fortunately, he has been perfect Day Two lately, winning all of his matches on Saturday in Atlanta and again in Philly.