Round 12: Kyle Hadfield vs. Richard Hoaen 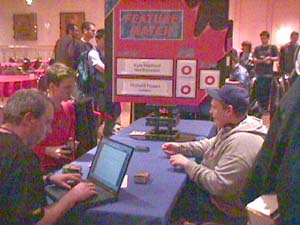 Kyle Hadfield, David Rood, and Jurgen Hahn are all staying at Richard Hoaen's house here in Toronto this weekend, and it looks like that house is the technology center for Canadian Magic. They all regularly chat on the IRC, and when Nationals came around, Hoaen volunteered his place. Something clicked. Going into the last round, all four were either stone locks for the Top 8, or in the case of Hadfield and Hoaen, playing against one another for the right to play Sunday.

Hoaen, running the 22-land deck-registration-error special, started out with an Angelic Wall and an Aven Fogbringer. Hadfield put out some sub-standard ground-pounders – Reborn Hero, Whispering Shade, and Treacherous Werewolf. Hoaen seemed to be predictable land-flooded and was having trouble defending himself. Over his next two turns, Hadfield played out two Earsplitting Rats, discarding a Selfless Exorcist and a Vigilant Sentry, while Hoaen discarded land. Hoaen eventually drew Amugaba, but Hadfield had Faceless Butcher. The army of bad creatures finished Hoaen off.

Hoaen got to go first in the second game, and pumped the fist when Hadfield had to mulligan.

Both players started out with little beaters, Aquamoeba for Hoean and Mystic Familiar for Hadfield. Both players played Shieldmage Advocates on turn three, meaning this could be a long game. But they kept attacking and playing guys, and the life totals kept dropping.

The problem was that Hadfield had no black mana and stopped after playing four spells. Hoaen, meanwhile, managed to cast and flashback a Deep Analysis, and was chock full o' goodness, playing stuff every turn up to and including the turn-7 Amugaba. Hadfield did eventually draw a Swamp, but the Fledgling Imp he brought forth wasn't going to get it done. 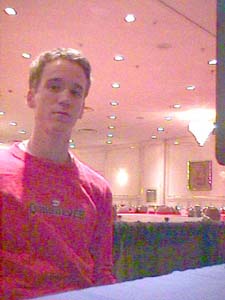 Between matches, the two competitors were trying to figure out how in the world Hoaen got Amugaba 4th in the draft. The answer was Hahn took a Wild Mongrel, Sam Lau a Cephalid Looter, and Jeff Cunningham – a diehard red/green mage – a Firebolt. How perfect. Hadfield got a Zealot 5th out of that pack.

Hadfield was developing on the ground with Reborn Hero, Mystic Zealot, Shieldmage Advocate, and Zombie Assassin. But Hoaen's blue Avens were wailing on him from above. A Morbid Hunger took care of the Fogbringer, and he cast a Mystic Familiar capable of blocking the Skywing with the help of the Advocate. But Hoaen attacked with it anyway.

At this point, the game degenerated into some sort of comedy of errors. Hoean put out a Stern Judge and started using it, and then gave Hadfield his Morbid Hunger back with his Advocate during some random combat. Hadfield then set up a complex maneuver with Floating Shield to get the Hunger past the Devoted Caretaker, but when he hit the Stern Judge with the Hunger, Hoaen just forgot to use the Advocate at all. 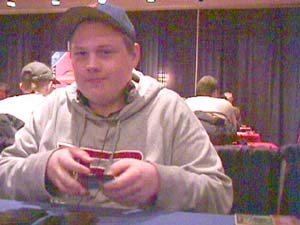 That didn't really matter, though. Hoaen started cluttering the skies with fliers, and Hadfield had no real defense. So he started to slow the pace down considerably. Once Amugaba came down on Hoaen's side, your could hear Hadfield's blood thicken.

After three or four turns of slow nothingness, the crowd started getting anxious, and some of them went to fetch more judges. About five of them arrived (since just about every other match was over), including Head Judge Mike Guptil.

Guptil: "You have a responsibility to play at a reasonable pace." Hadfield: "Don't worry. I'll take warnings up to and including a game loss."

Hadfield never really sped up the pace, and Guptil did indeed give him a warning. Both players messed up timing in combat involving threshold and damage prevention – more than once – but who can blame them given the pressure-filled circumstances? No number of misplays could do anything to help Hadfield against Hoaen's army of fliers, and the youngster sat there in shock as the Top 8 slipped from his grasp.

Kyle Hadfield needed one win from his final draft deck and couldn't get it, o-3'ing himself right out of the tournament. Richard Hoaen, on the other hand, rebounded nicely from his round-10 match loss, and his reward is a chance to make the national team tomorrow.