Round 12: The Lord and the Looter

, what a match! The two most recent World Champions have just sat down opposite each other: 2004 winner Julien Nuijten from the Magic powerhouse country of the Netherlands, and the trophy holder of 2005, Katsuhiro Mori from Japan. Both players were tied for fourth place in the current standings at 27 points and had contributed to the position of their respective National teams: Japan held a highly contested first place while the Netherlands nipped closely on their heels, tied with three other teams. 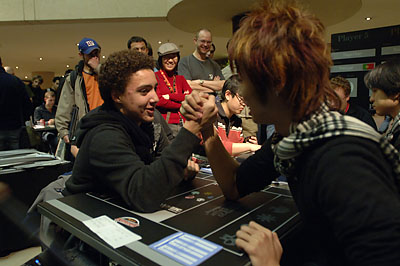 The champs settled it with a little brawn.

The spectators were plentiful, and the players busted out their Pro Player cards. Both had many of their own ones, and Julien offered the trade: "Two for mine for three of yours?" Katsuhiro accepted. The pre-game banter was largely played out wordlessly: the American handshake game and a short arm-wrestling match - Julien won the handshakes, but Katsuhiro crushed the former Dutch World champ.

The match began with a deck check and a caution for each of the players for marked sleeves. Julien had to replace some, Katsuhiro was asked to de-sleeve, replacing one quite bendy Island. Already, the spectators crowded the feature match area and the gallery above it. The two superstars shook hands and off they were... 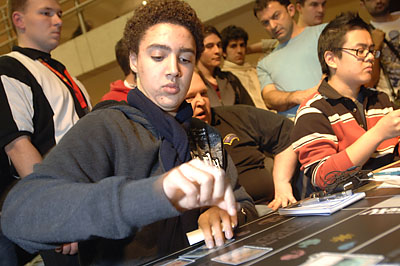 Nuijten needed some help after a mulligan.

...with a mulligan for Julien, on the play. The match set off at a fast pace, and when Temporal Isolation from Julien immobilized Katsuhiro's Looter il-Kor, the players had rarely blinked. Mana Skimmer from Katsuhiro turned one of Julien's two Plains into a Swamp. The Dutchie had Chromatic Star and Careful Consideration discarding Island and Cloudchaser Kestrel, going down to 14 from Mana Skimmer and Gorgon Recluse. Katsuhiro added another Mana Skimmer to the board, threatening to shut Julien off almost all his colored mana except for one Mountain.

The Dutchie had Lightning Axe for a Skimmer and finally made his first creature, Cavalry Master. Katsuhiro hardcast Mindstab, taking out Jedit's Dragoons, Blink and Plains. Julien was left with one card in hand and six life against Katsuhiro's five-power army, which now included Sage of Epityr.

Julien considered attacking. He didn't, just laying a land and saying go. Katsuhiro did, though, and sent in Recluse and Skimmer. Cavalry Master blocked the Recluse and Bogardan Rager flashed into play, but the Japanese former champ had Tendrils of Corruption. Julien was at four and basically out of options unless his one-card hand could yield something amazing. It had a morph that turned out to be Fledgling Mawcor, but with the help of Feebleness Katsuhiro prevented the pinger from actually doing anything relevant, and Julien scooped up his cards.

The first match had proceeded in almost absolute silence save the occasional announcement of a life total change. The pregame procedure wasn't any different, silent except for an almost inaudible "I'll play" from Julien. The Dutch pro looked at his first seven cards, sighed and put them pack on his library. Two games, two mulligans... two losses? The second game would hold the answer!

Katsuhiro on the draw kicked off with a first-turn Sage of Epityr, Julien had just a Chromatic Star. When Katsuhiro suspended Errant Ephemeron on turn two, he gained the initiative and Julien cracked his Star for white mana and a card. He made a mystery morph that he had to look at again while deciding if he should block the attacking Sage of Epityr. He was obviously nervous, shaking slightly, but that may just have been the cold wind blowing through the feature match area. The Sage came through, no surprise from Katsuhiro, and the Japanese made Jhoira's Timebug - a rather interesting card that hasn't got much love from the Pros so far. 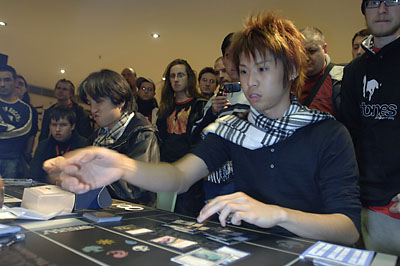 The scarf says it all.

Two counters left on the Ephemeron and again the Sage went to do his dirty beatdown work. Again, Julien pondered and declared no blocks. Mana Skimmer from Katsuhiro made things worse for Julien, who was equipped with just one Plains, one Mountain and two Islands. The Skimmer could do some serious damage to the Dutchie's mana base, so Julien unmorphed Weathered Bodyguards before he'd lose the ability to do so, played a morph and took Katsuhiro to 16 with the Bodyguards.

The buffer creature would hold off the damage for at least one turn, but Katsuhiro used his Timebug to take the last counter off his Ephemeron and attack with it and the Skimmer. Julien unmorphed Vesuvan Shapeshifter, copying the 4/4 flier and killing the Skimmer with a block. Katsuhiro played Think Twice and Looter il-Kor. A crucial Lightning Axe from Julien took out Katsuhiro's Ephemeron and the attack took the ruling World champion to 12.

Katsuhiro Mindstabbed Julien, getting Bogardan Rager and Island. In return, the Ephemeron-shaped Shapeshifter took a good chunk of four out of Katsuhiro's life total. Eight life for him and an inferior board made things look like Game 3 was in short order. Katsuhiro, though, thought otherwise and used Faceless Butcher to remove the big threat that Vesuvan Shapeshifter posed. Julien (at 14 life) still had his Bodyguards and yet another Morph, but the initiative was back on Katsuhiro's side.

The Japanese player was determined to seize it, and attacked with his entire board: Timebug, Looter, Sage and Faceless Butcher. That would be enough damage to kill the Bodyguards unless Julien's Morph would go in on the action. But Julien didn't want to risk the apparently precious card, and Bodyguards squashed the Timebug on its way to the grave. Katsuhiro's impressive follow-up was Errant Ephemeron - hardcast, and meaning some serious business.

Julien made Cloudchaser Kestrel. Would it be more than just a chump-blocker? Ephemeron and Looter came in, Julien went to 8 life. Katsuhiro added Lord of Atlantis. Julien checked, but no, Looter is no Merfolk, and neither is the Spiketail Drakeling that Katsuhiro played next turn. Julien had nothing, and again task force Ephemeron came in, joined by the Lord and the Looter. Julien's morph turned out to be yet another Weathered Bodyguards, killing the Lord and preventing the rest of the damage for that turn.

But the former World Champion from the Netherlands was drawing dead. He extended the hand, and Katsuhiro Mori advanced to the exclusive ranks of the players with 10 wins to their name!