Round 12: Lumbering Over The Limited Finish Line

By this point, neither of these players should need much introduction. Luis Scott-Vargas, better known as LSV, is the biggest name in American Magic today, one of the most consistent finishers of all time, and the unofficial host of this World Championships. Raphael Levy has been playing the game since it was printed in France, and has been a staple on the Pro Tour ever since. Helping him attend all of these Pro Tours is the fact that he was rewarded for his long and storied career as a Magic pro with an induction into the Hall of Fame in 2006. 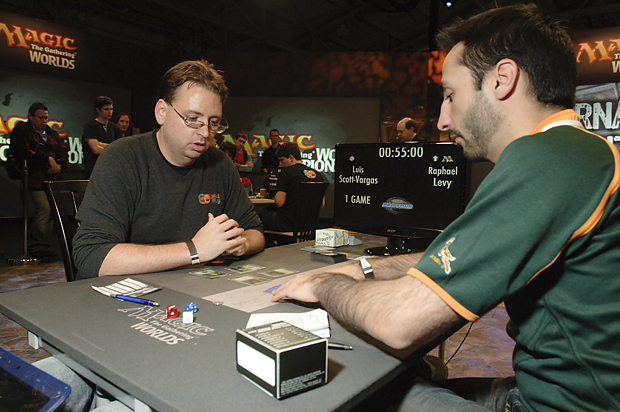 Both players, known as being Pro Tour juggernauts, face off in the final round of Limited for the World Championships.

LSV got on the board first, playing an Unruly Mob on turn-two. It was joined by a Villagers of Estwald on the following turn, giving it something to be potentially get mad about. Levy hadn't made a play in his first three turns, breaking his silence with a Forbidden Alchemy at the end of LSV's third turn. After tossing a couple of lands and a Stitcher's Apprentice into his graveyard, he untapped to feed a Makeshift Mauler. The Mauler stuck around for approximately five seconds before being hidden under LSV's Fiend Hunter.

After a slow start, Levy needed some gas to get back into things. The first spark came in the form of a Scourge of Geier Reach. With so many creatures on LSV's side, the Scourge was a 6/6, fairly imposing and sure to give LSV some pause. While he didn't attack into the flame elephant, LSV did play a growing creature of his own: Mikaeus, the Lunarch. Starting as a 3/3, it would be a while before he would match the Scourge, but his impact threatened to be far greater. 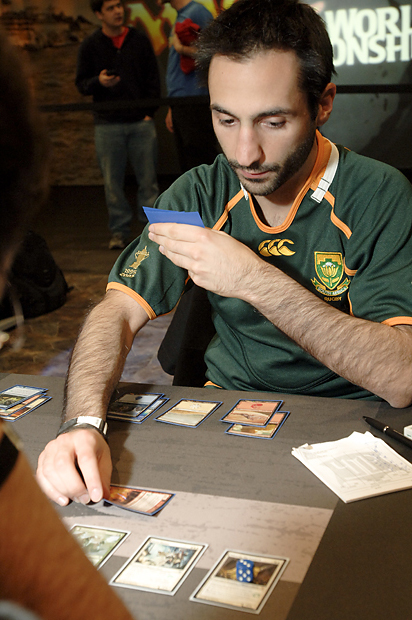 Raphael Levy starts out slow in the first game, but he has a plan. Right?

Levy attacked, sending his now 7/7 Scourge at LSV. After combat, he didn't have another spell. LSV flipped his Villagers and threatened to send his team. Levy thought for a minute before using Feeling of Dread to tap Mikaeus and the recently transformed Howlpack. In response, LSV used Mikaeus to pump his team, but in response to that, Levy used a Brimstone Volley to finish off the Fiend Hunter. Refusing to let the stack resolve even one spell, LSV responded to that with a Ranger's Guile, keeping his Hunter alive and ruining what otherwise would have been an incredible swing for Levy.

Levy scooped up his cards.

"Man, that didn't go well for me," Levy sighed as he shuffled his deck.

"Yeah, that would have been a pretty bad swing for me if I didn't have the Guile," LSV admitted with a nod.

LSV was first on the board again in the second game, using an Avacyn's Pilgrim to power out a Mayor of Avabruck.

"Awesome! I really like that..." Levy said with absolutely no sarcasm. Except, for the fact, that it was.

A Desperate Ravings drew him two cards at the cost of an Island, and he untapped to play a Hanweir Watchkeep. LSV passed the turn. This flipped the Mayor on Levy's upkeep and let Levy flip his Watchkeep, resulting in a Werewolf/Werewolf stare-down. The recently flipped Bane of Hanweirhad to attack, so Levy sent his monster over for 5. When Levy tried to cast a Selhoff Occultist, LSV responded with a Smite the Monstrous to kill the Bane. This left Levy with just a 2/3 in play, and LSV about to unload.

LSV started by making a Villagers of Estwald and a Wolf with his Howlpack Alpha. Levy made a Makeshift Mauler. LSV made a trio of creatures, this time with an Ambush Viper and a Spectral Rider joining a fresh Wolf token. His army had grown to massive proportions, dwarfing Levy's. It was only a matter of time before the swinging began. Levy got another turn of reprieve, using it to Think Twice and cast Forbidden Alchemy. This allowed the Villagers of Estwald to flip, turning it into an enhanced Howlpack of Estwald. Despite this, LSV was content to simply send his Spectral Rider.

Levy decided to only play a single Selhoff Occultist on his next turn, causing LSV's two Werewolves to flip back down. Now, with his creatures smaller, LSV seemed to be contemplating something. He eventually played a Lumberknot, drawing an "I don't like that guy" from Levy. After that, he attacked with his Ambush Viper and Spectral Rider. While contemplating his blocks, Levy expounded upon his previous statement.

"I would even go so far as to say I hate that guy, especially in this situation."

The Ambush Viper died to an Occultist, taking it out in the process. Lumberknot grew. Levy played Think Twice from his graveyard at the end of LSV's turn, looking for something. What he found was a Pitchburn Devils, which promptly hit play.

LSV went into the tank. Life totals stood at 15-13 in his favor. When he decided to make his attacks, he sent his pair of Wolves and the Rider. Levy thought for a moment before lining his Occultist up in front of one Wolf, and his Devils in front of another. Before damage, LSV used a Ranger's Guile to kill Levy's Occultist. Lumberknot became a 5/5, and Levy dropped to 11. After combat, the newly 5/5 Lumberknot fought Levy's Makeshift Mauler with a Prey Upon, leaving the Frenchman with only a Pitchburn Devils to his name, and facing down a veritable army.

Despite the seemingly insurmountable odds, he put up a good fight. Levy used an Into the Maw of Hell to kill the Spectral Rider and a Plains, getting rid of the one attacker he couldn't block. That didn't stop LSV from sending his whole team, though. After bringing an Unruly Mob out, sure to get angry during this attack, LSV sent all five creatures into the red zone. The Pitchburn Devils jumped in front of the Lumberknot, dying and taking out the Mayor of Avabruck. That dropped Levy to 6. 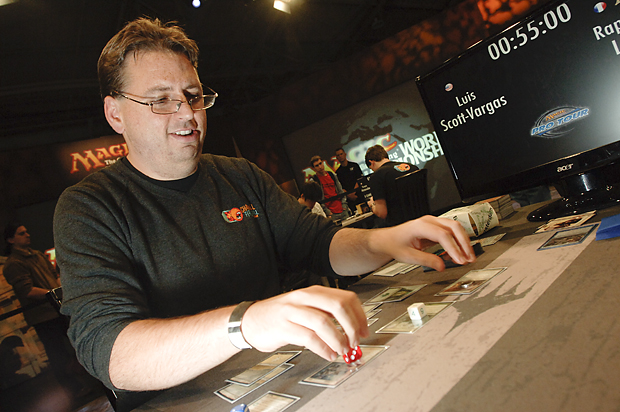 Levy was in deep, and appropriately used a Desperate Ravings to find some sort of answer. He discarded a Feeling of Dread before playing a Galvanic Juggernaut, drawing a laugh from both players. When LSV went to attack on the next turn, Levy used a Feeling of Dread to tap down the two biggest non-Lumberknot creatures, while blocking the angry tree with his lone remaining creature. Dropping to three, Levy untapped, made sure that there wasn't a Blasphemous Act or something on the top of his deck and conceded.

"I just can't beat a Lumberknot," he sighed after the match.

"Yeah, it's really hard for decks like that to beat him."

"At least you got him from the other direction," Levy consoled himself, glad that at least he hadn't been the instrument of his own demise.