Round 12: "Maybe if You Mulligan to Four or Something..."

While Christoph Huber and Rubens Campana may not be household names just yet, both have managed to put themselves on the top of this year's Worlds standings coming into Round 12 and the first match of Legacy, meaning readers at home might want to take note of them now; either could be the next World Champion. Rubens, a journalist, hails from Brazil, while Christoph, a business student, made the trip to New York from Switzerland. 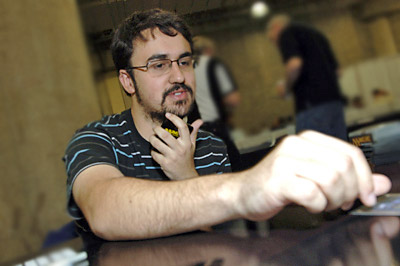 Brazil's Rubens Campana Huber won the die roll and after both players verified the round had begun they had at it. Neither needed a mulligan and Huber led off with a Wasteland though he had no one-drop. Campana did in effect, leading with a Wasteland of his own and using it to destroy his opponent's first land. Flagstones of Trokair was up next for Huber and was matched by a Volcanic Island from Campana. When Huber followed up with a City of Traitors into Crucible of Worlds Campana called for a pause. He Brainstormed, presumably looking for a Force of Will, and went into the tank to consider his options. He put one card back to the top of his deck, then slowly put the second back? Would the Crucible resolve, giving Huber a possible Wasteland lock? A Daze said no but set Rubens back to no land on board.

Christoph kept the pressure on his opponent during his following turn by tapping his City of Traitors for mana, playing a Plains (killing the City), and tapping the Plains for a Trinisphere. That met a Force of Will from the Brazilian who then untapped, played Tropical Island to complement his Volcanic, and Tarmogoyf, which was a 3/4. Ancient Tomb put Huber to 18 as he used his four mana to play Smokestack. Campana had to stop and read the Urza's Saga rare before considering his plays for his turn. Not satisfied he understood how the card worked after the first read and despite having moved on with his turn, the Brazilian read Smokestack again, then verified his interpretation of the card with Huber. A Ponder then revealed three spicy numbers for Campana who opted not to shuffle, instead drawing. A Wasteland then allowed him to make Werebear, though he was two cards short of having the threshold necessary to make the mana-creature a more formidable 4/4.

Huber untapped and added a counter to his Smokestack, setting the abilities up so that he wouldn't have to sacrifice any permanents. After drawing for the turn he considered his options. The four-mana artifact would help keep his opponent contained, but with two creatures and three lands Huber needed to get something going or risk being blown out. His solution? He played a second City of Traitors and tapped it for Powder Keg. When that wasn't countered he opted to tap out in order to play a Chalice of the Void for one. Things had certainly changed in the course of a single turn.

Rubens turned his creatures sideways then played a Mental Note during combat to pump his Werebear. The Chalice countered the instant, but because it was the seventh card in his graveyard he managed to add an extra 3 damage to the attack leaving the score 19–6 in his favor. Christoph, still not out of the woods, opted to sacrifice his Flagstones on upkeep to his Smokestack before adding a counter. The play netted him a Plains and revealed how even newer cards like the rare land from Time Spiral can be relevant in an older format like Legacy. His Powder Keg went up to one counter, but he needed an answer to the creatures on board. He found one in the form of Armageddon, which erased all his opponent's lands forcing Campana to sacrifice both Werebear and Tarmogoyf to the Smokestack during his upkeep. Seeing the writing on the wall the Brazilian packed it in to get to the sideboard.

Huber opted to sideboard four Defense Grids over his Chalice of the Voids, while Rubens cut four Lightning Bolts for two Engineered Explosives and two Krosan Grips. His decision to play Threshold seemed like a potentially risky one. While arguably the most popular archetype in Legacy presently, its popularity means it was one of the decks pros most expected coming into the tournament. Christoph's controlling build seemed to have been designed with that very fact in mind, and looked more than capable of dealing with undercosted green threats backed by counters.

Matters were made worse for Rubens as he was forced to mulligan on the play, but he opted to keep his second hand and Huber joined him on a trip to Paris. After some consideration the Swiss player decided he couldn't keep his six-carder either and shipped it back as well. A five card hand was quickly kept.

Rubens led with Volcanic Island into Ponder and liked what he saw, again keeping all three cards on top of his library. Christoph drew his card for the turn, then lost himself in concentration despite not having played any lands. He cast Mox Diamond, waiting for a response from Rubens, but the Brazilian didn't indicate any wish to Daze or Force of Will the artifact. Huber then played a land, perhaps a surprising move considering his Mox Diamond could have been protected from Daze had he dropped his Flagstones of Trokair before playing it. Rubens made a Wasteland and passed. When his opponent played no land or spells, he Wastelanded the Flagstones. As Huber moved to search out a Plains Campana stopped him showing Stifle and countering the triggered ability. A Werebear and Nimble Mongoose quickly joined the Brazilian's ranks and his opponent was soon down to half his life at 10. Facing a seemingly insurmountable advantage, the Swiss player conceded after checking to make sure the top card of his library offered no help.

Christoph opted to bring his Chalices back in for the rubber game, while Rubens was happy to leave his sideboard laying next to his deck box untouched. 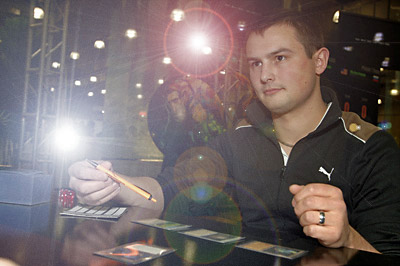 Switzerland's Christoph Huber Neither player needed a mulligan for their final game and Christoph led with Wasteland and Mox Diamond discarding a second Wasteland into no counterspell from Campana. A second Mox Diamond also got the okay from his opponent and a first turn Crucible of Worlds hit play for the Swiss competitor. That did not mean good things for the Threshold player, whose mostly non-basic manabase would suffer from the double Wastelands under Crucible. Rubens did not have a counter, and when Huber re-played a Wasteland from his graveyard and then tried to blow up Campana's Tropical Island on the following turn the Brazilian made Stifle, forcing Huber to go to zero lands by using his second copy of the nonbasic to do the job.

A second Tropical Island from Campana was blown up again, but not before he managed to get off a Brainstorm. That led to Volcanic Island into Ponder which, for the third time in the match, left the three cards on the top of Campana's deck. Huber was content to simply blow up the next non-basic which kept Rubens landless on his own turn. Both players sat back doing little, with Rubens discarding and missing land drops while Huber hit one each turn thanks to his draw step and Crucible. When he attempted a Ghostly Prison his opponent had Force of Will removing Daze, but Campana still didn't have a land that would get him back into the game and continued passing his turns after drawing.

A Chalice of the Void for one drew a pause from the Brazilian, who thought carefully, then extended his hand in defeat.

While discussing the sideboarding decisions both players made after the match, Rubens pointed to Krosan Grip and said, "After playing the match, I would not sideboard these in." Christoph shrugged and added, "You cannot win this matchup."

"Sure, maybe if you mulligan to four or something."

As Rubens left the feature match area to rejoin his friends Christoph explained he had decided not to play his land before Mox Diamond in the second game because he wanted to force a Daze out of his opponent's hand. "I had a second Mox Diamond so the lands in my hand were relatively useless."