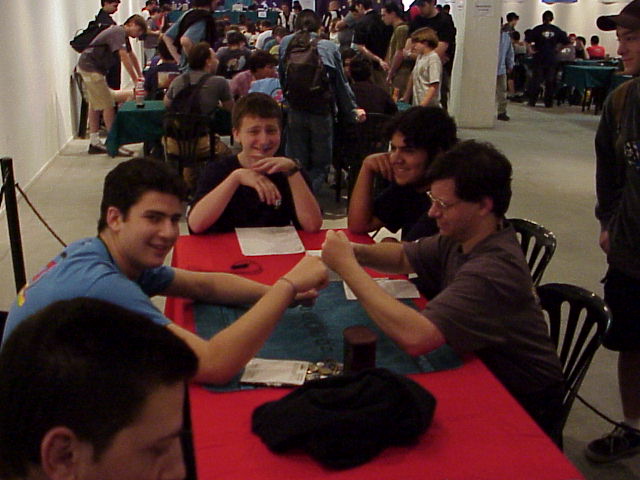 This match was between the experienced Michael Pustilnik, who has played almost 20 Pro Tours and won GP-Memphis, faced a very difficult match against the 2000 Argentinean star and Nationals runner-up Jose Ignacio Barbero. They were both playing NecroDonate or "Trix."

In the first game, Mike took a mulligan. Then he just played a Swamp. Barbero instead played a Swamp and a Mox Diamond. On his next turn, Pustilnik cast a Mox and tried to play a Necropotence, but Barbero played a Demonic Consultation in response naming Force of Will and playing it. After this, Jose played a Necro which incredibly made it into play and he drew 10 cards. After this, Mike didn't play anything, letting Jose play two Duress and discarding one Illusions of Grandeur and one Donate leaving in Pustilnik's hand one Mox, so he decided to return the one which was already in play to his hand using a Hoodwink. After that, Barbero cast his Illusions and Donated it.

Barbero sideboarded only 2 Annuls and 3 Negators leaving his Pyroblasts out meanwhile Mike sideboarded about 8 cards including Skittering Skirge, Pyroblast and Annul.

In the second game, Pustilnik started strong, forcing a discard (Force of Will) with a Duress. Then Barbero, who had only one land in his hand and was getting worried about that, drew a Swamp and played it. Then Mike played an Underground Sea and a Mox Diamond. At the end of Pustilnik's turn, Barbero played a Vampiric Tutor and searched for an Underground Sea. He played it and passed the turn. Mike did the same and at the end of the turn, Jose played a Brainstorm. Barbero played a Duress discarding a Force of Will and then cast a Phyrexian Negator, the one that 4 turns later give him the victory.