Round 12: Mike Long vs. Bill Stead

Some guys want glory one more time, while some just want it the first time. Mike Long has made three US Teams and a fourth US Nationals top 8 while Bill Stead is playing in his first Nationals, but the two men have one thing in common: desire. Bill went 6-0 yesterday, Mike's gone 5-0 today, but that's all in the past now. All that matters to these two is winning two of the next three. Doing so gets them one step closer to the promised land. 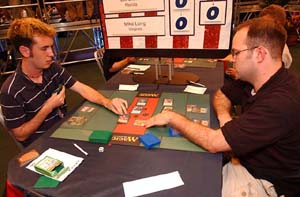 With Mike playing first, the two engaged in some bitter pre-game talk, with Stead suggesting the stall might be in effect. After Mike shuffled for close to five minutes (taking advantage of the extra time the two were getting thanks to a sleeve check), Bill took a mulligan before playing a first turn Cabal Trainee, which was closely followed by a second turn Aquamoeba.

While Bill beat down, Mike did nothing, playing three land without a spell to be seen. Bill played a third land, but was unable to keep up the momentum, passing the turn without a spell.

Mike, playing his third color, finally had something to do on turn four, casting Battlewise Aven. The eighteen year old Stead, hardly intimidated by the legend, attacked with Aquamoeba again, but when Mike blocked, he had no effects, instead choosing to cast Aven Fisher. Long played a fifth land and cast Rabid Elephant, referring to him as 'humpy', the nicknames being an old Long trademark. On Stead's next turn, Aven Fisher attacked, taking Long to fifteen thanks to the Trainee threat. With Long at fifteen, Stead tapped out to enchant an Island with Chamber of Manipulation and passed the turn.

Long who'd been reading cards all day, took a moment to read the Chamber before attacking with the Rabid Elephant and the Aven, taking Bill to fifteen. He then cast Spurnmage Advocate with four cards in his hand and passed the turn.

Bill drew and attacked with his three creatures, with the Advocate blocking the Trainee and Aven Fisher being Flame Bursted before damage. Bill then played a fifth land and laid a bomb on the table, with Sengir Vampire making an appearance. Unfortunately for him, Mike had the answer in hand, with Violent Eruption taking care of the flyer before Mike's attackers took Stead to ten life. 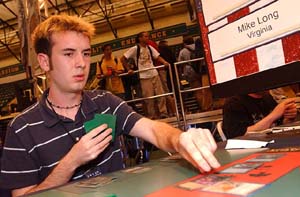 Bill's next play was Cursed Monstrosity, to which Mike apparently had no immediate answer. The Elephant took Stead to seven, but the Monstrosity took Mike to nine, and the Chamber was looking more daunting than ever with four cards in Bill's hand. He then cast Hydromorph Guardian and passed the turn.

Mike's turn saw the Chamber's first activation, stopping the Virginian from attacking, and the Monstrosity then took him to five before Mike cast a second Battlewise Aven. The Monstrosity came in once again, and both Avens blocked, with the Chamber taking one and the other dying in combat.

Mike knew he had to take advantage of the chamber's inactivity on his turn, and sent in all of the troops. Stead, at seven, didn't have a lot of life to play with, and chose to Toxic Stench the Elephant before Aquamoeba died to Halbadier. Bill untapped, drew and attacked, and Mike scooped up his land.

With Mike again playing first, it was he who made the first play this time, casting Spurnmage Advocate on turn one. The 1/1 got through for a point of damage before Stead played Aquamoeba, which was followed by Cephalid Scout a turn later.

Mike's second and third turns were uneventful, but turn four was a different story, with Centaur Chieftain entering play and attacking with the Advocate, which traded with the Scout after Bill cast Mental Note. Bill cast nothing, taking three from the Chieftain on the following turn, managing only a weak Grip of Amnesia when Mike played Rabid Elephant. He then followed with something a little stronger—Sengir Vampire—on his fifth turn.

Mike looked a little backed up, but he corrected the situation by casting Arcane Teachings on the Centaur and attacking, with the resulting double block leading to the deaths of the Vampire and Aquamoeba thanks to mike sacrificing Abandoned Outpost to cast Sonic Seizure, discarding Flame Burst. Bill cast Crippling Fatigue on the Elephant then flashed it back, going to two after the Chieftain attacked, and when Mike showed him Firebolt it was on to Game 3.

'"I need you know more than ever" Bill shouted at his deck before both players looked at their hands and chose to keep. Bill, playing first, played turn two Cephalid Scout and turn three Treacherous Werewolf, with the only Long answer being Divine Sacrament before Childhood Horror entered play. 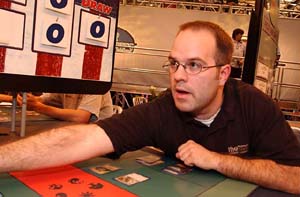 Bill knocked on his deck and played a fifth land after Mike played a 3/3 Battlewise Aven, but the knock apparently did nothing, as the Floridian passed the turn. Mike then sacrificed Abandoned Outpost for Centaur Chieftain, with Stead sacrificing an Island to the Scout in response before the attack ensued, with no blockers declared and the score going to 16-14 in Mike's favor.

Stead untapped and drew, attacking with his three creatures, playing a land and again casting nothing, giving the turn to Long, who though long and hard before playing Arcane teachings on the Chieftain. Bill cast Grip of Amnesia before the enchantment resolved, and the ensuing attack took him to six life. The Scout ate another Island before Bill untapped, and with Long's pulse around 108, the kid slowed down, with the decision he was about to make likely holding his future in the balance. Stead attacked with all three creatures, taking the score to 6-6. Innocent Blood took out Cephalid Scout and Centaur Chieftain before the turn ended, with the Battlewise Aven then attacking for two thanks to Toxic Stench. Stead was at four life and feeling safe, but he never got to untap: Long cast Flame Burst and then responded with Sonic Seizure, doing five, ending the match, and propelling himself to his fifth US Nationals top 8, a chance at his fourth US Team, and maybe most importantly, one last chance at glory.