Ed Fear sat down at the table, very unhappy about the way the draft went. “Alex Shvartsman ruined my draft!”, he angrily exclaimed. “Yeah, but he ended up with one of the best decks I’ve ever seen”, countered Chris Benafel, also at the feature match table. “Do you have a die?”, queried Mike Turian, settling for winning the eventual coin flip. 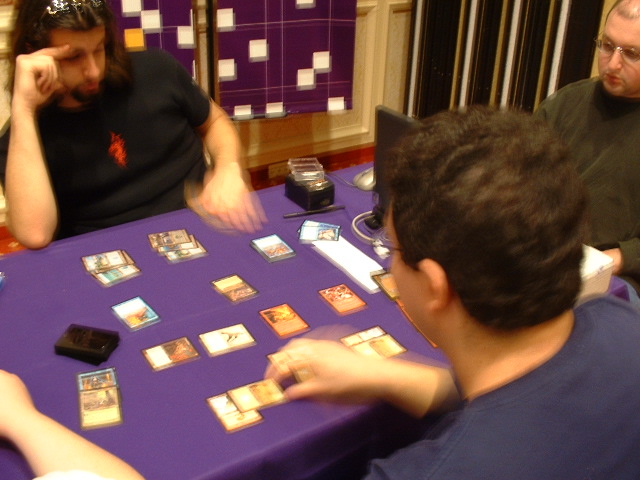 “Yup”, chirped Turian, keeping his opening hand. Ed, very dejected and somber, seemed completely intent on not even playing the game, as Mike dropped turn one Goblin Sledder, turn two Lightning Rift, and turn three morph guy. Ed stopped the beats with a Mistform Wall, and all Turian could muster was a Nosy Goblin. Ed, by contrast, cast Sage Aven, setting up Future Sight on the top of his deck in an attempt to go absolutely berserk with card advantage.

Ed, of course, drew and cast his broken enchantment the following turn, but took four to the face as Mike cast Tribal Golem, which drove over for as a 4/4 haste first striker. Ed traded Sage Aven and a morph Ascending Aven for Goblin Taskmaster and Nosy Goblin, and proceeded to play Swamp, Imagecrafter, Riptide Biologist and Frightshroud Courier off of Future Sight.

On his own turn, Turian cast Pinpoint Avalanche killing the Biologist. This allowed him to swing with Nosy Goblin #2 and the Golem. Since Ed had a horde of one toughness creatures, he had to trade two for one against the Goblin and the Slinger. This left Ed at two life, while Turian had no cards in hand and Lightning Rift on the board.

Ed began casting huge creatures, starting with Fallen Cleric and following with Anurid Murkdiver. He used Imagecrafter to shut down the Golem (turning the soldier into a leper), allowing it to safely trade with the swampwalking zombie. Ed began to turn the game around, but couldn’t get Future Sight to give him anything other than lands and irrelevant cards. Mike finally drew Erratic Explosion, using it to reveal Solar Blast and kill Ed.

Ed: “Lightning Rift wasn’t stellar that game. You cast it and twenty-two turns later I was dead.”
Mike: “Actually, it cost me a point of damage because I couldn’t pump my Taskmaster that turn.”
Ed: “That’s a great card. Discard Lightning Rift: your opponent gains one life and you mulligan.” 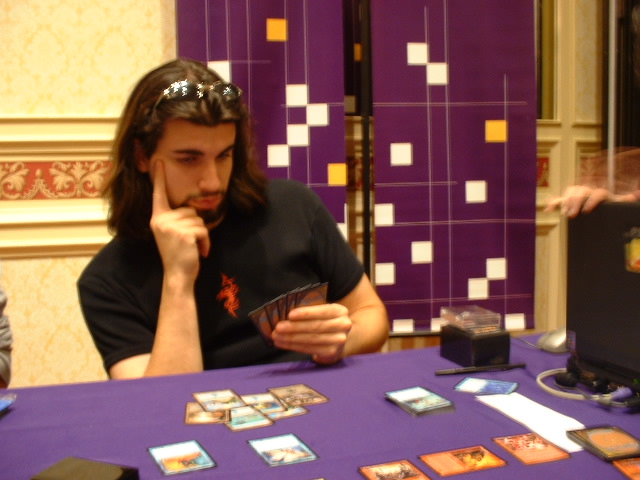 Ed began the fun with a first turn Imagecrafter, which Mike met with a first turn Weathered Wayfarer. Mike’s second turn Sparksmith looked relatively neutered given the Imagecrafter on the board, but powered up the shooter with a third turn Nosy Goblin. Ed turned the Wayfarer into a goblin so that Mike would take an extra damage, and then dropped Mistform Wall followed by a morph creature. Both players were stuck on three lands however, and the next turn Mike traded his Nosy Goblin for the Mistform creature (backed by Sparksmith) to bring the life totals down to 19-9 in favor of Ed, even though he lacked a board presence.

Mike’s next turn brought down Goblin Taskmaster and Glory Seeker, and Ed found time to play a fourth land and Mistform Dreamer. The Dreamer died to Sparksmith, but not before making Mike take significant damage with his own shooter. Turian attacked with his horde, bringing Ed down to fourteen while being stuck at four himself.

As Ed played more and more land, Mike started being able to activate his Land Tax machine, searching out Daru Encampment and a cycling land from his deck in consecutive turns. He then cast , attacking for eight and Shocking Ed to death.