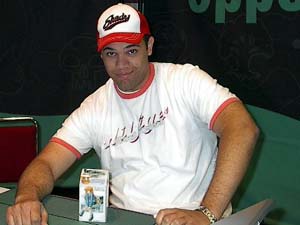 Milton Figueroa is a Puerto Rican semi-pro Magic player who now lives in Miami. He was undefeated in the tournament thus far going into Round 10, but lost there and now has another tough match against a hung over Osyp Lebedowicz. Osyp is a Team TOGIT member, ladies man, man's man, and man about town who already has a Pro Tour title in Block Constructed, and would like to add a Grand Prix title to his resume.

If it seems like we've been featuring a lot of Affinity decks this weekend, that's because there are only two decks at the top tables: Affinity and Big Red. There are other decks in the top 64, but at this point they look to be longshots to make the final 8. This match is yet another Affinity mirror, with Lebedowicz piloting an interesting green sideboard variation to board in Oxidizes and Viridian Shamans. Figueroa's list is pretty straightforward, and his lack of "flair", as some would put it, has server him well thus far on the weekend. Unfortunately for Milton, this match would be like his last feature match, and was characterized by nervousness and some poor decision-making that resulted in his second loss of the weekend.

"Do you know what Osyp means in English? It means Super Stud."

On turn 2, Figueroa had a Worker, an Ornithopter, two Frogmites, and Somber Hoverguard on the board to Osyp's Aether Vial and Frogmite. The big New Jersey resident was able to recovery somewhat through Aether Vial, Cranial Plating, and Myr Enforcer, and suddenly the game was afoot. Another Hoverguard from Figueroa plus a free Atog for Osyp further complicated the board. Osyp attacked, getting some decent trades, but dropping his life total to five from the subsequent life loss. Now all Figueroa had to do is either draw a Ravager or something to make red mana in order to let him cast the Shrapnel Blast he had been holding in hand all game. He didn't draw either, and Osyp killed him on the next turn, as Figueroa made a mistake by not blocking correctly, which ended up with Milton dead and Osyp at one life.

The attack was complicated, as Osyp attacked with a 6/1 Disciple of the Vault, two Atogs, and a Myr Enforcer at three life. Milton had an Ornithopter and a Disciple available to block, but only chose to block the Disciple with his Ornithopter, leaving the two artifact-munchers and the Enforcer unblocked. Osyp simply sacrificed one artifact to each of his Atogs, reducing

"Aw man, if I had just blocked the Myr Enforcer, I would have won that match. No good to realize that now." 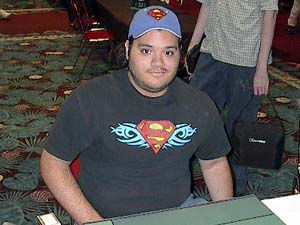 A turn one Oxidize from Osyp on Milton's land resulted in another play mistake from Figueroa, as he used Welding Jar to try and regenerate the land, but was informed that the land died anyway. Figueroa drew another card and then scooped after Osyp played a second turn Ravager, saying there was no way he could stay in the match with no land and an early Ravager. In spite of the play mistake, Milton's real problem was probably keeping a sketchy hand.

Osyp: "Good luck next round. And don't mess up Milton, come on, tighten up! Just win and you're in."

Figueroa: "God, please don't give me any more Feature Matches."