Round 12: Nicolai Herzog vs. Ladislav Zupancic 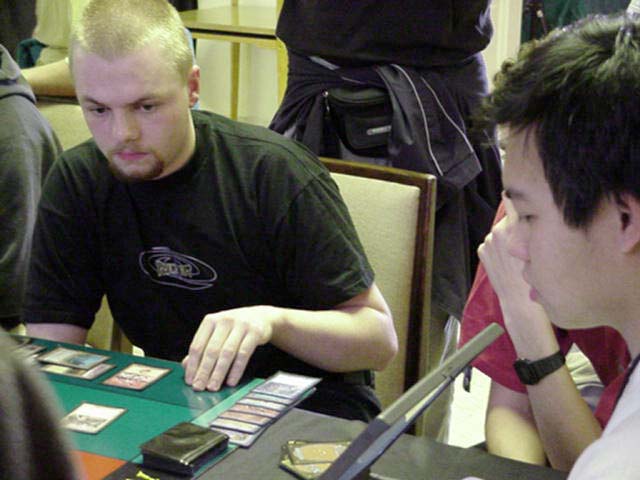 Both players had performed very well during the first draft. With a victory here they should be guarantied a top 8 spot. The loser could still make it while playing good during the two coming rounds.
Zupanic played an aggressive RU deck featuring a healthy dose of burn, and blue quality fliers. Nicolai plays a WUr deck built around the threshold concept, with three Mystic Zealots, and many quality red burns.

The match was not covered until five minutes into the first game, and the life standing at that point was 15-9 to Zupancic. Ladislav started the first game aggressively, playing creatures non-stop, and among them many of his best creatures. Nicolai had trouble dealing with that, as he was put on a life-clock. He made one mistake as he shot down the wrong creature, and lost the game. The life standing gives us a pretty clear picture of the game.

Herzog started the game by playing a plains, then Debris, while Ladislav opened up with a Cephalid Scout. Nicolai played a scout of his own which got shot down directly by a Firebolt. The Escape Artist was then played by Ladislav, but Nicolai shot the scout down by the Firebolt as well.

An Aven Rider made it into play from Ladislav. Nicolai replied by playing a Mystic Zealot, then Prison Gifted it. He then used it to kill the Artist, and eventually the shot down the Aven with a Flame Burst as well.

Ladislav tried to maintain the pressure, made an Ember Beast and an Aven Cloudchaser, but the Cloudchaser was bounced at the end of the turn by Either Burst. The Ember Beast on Ladislav's side did not seem so impressive now as Nicolai's Mystic Enforcer entered the game with threshold ability.

Nicolai attacked with the Enforcer making the life different 12-10. Ladislav decided to get some damage through took his Millikin and the Ember Beast into the red-zone. Nicolai blocked the Millikin with his Zealot, and took the damages going down to seven.

Nicolai then managed to find take over the game by playing many of his impressive flyers. As Ladislav could not find the solution to that, the game went to Herzog. 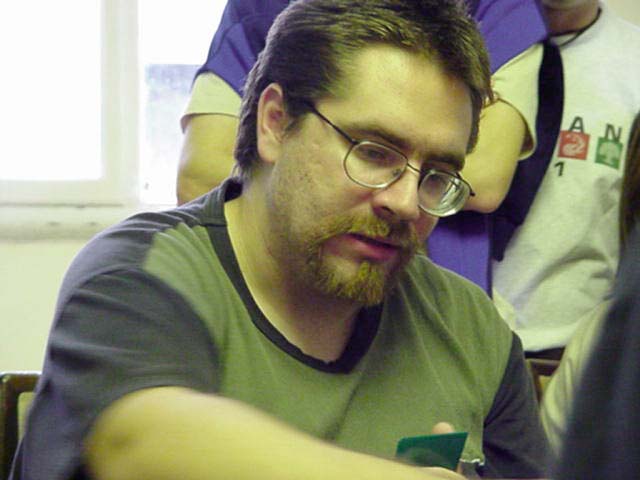 Twenty-seven minutes left on the clock for the last game, which seemed to be more than enough as both players could play very aggressively. While talking between round, Nicolai demonstrated his dextrous pile-shuffling technique. The players then discussed a bit about the mistake that Nicolai made in the first game.

Ladislav played first with Mountain and Island, while Nicolai played two Seafloor Debris in a row. The first play for this game was Cephalid Scout on Ladislav's turn, then joined by the haste Pardic Firecat on the next turn hitting Nicolai to seventeen. Nicolai played the Zealot to slow down the beat, but went down to sixteen, as he could not block the flying Cephalid.

Nicolai played Repel on his opponent's new played Cloudchaser to buy him a turn. He then simply played a Plains and passed the turn, definitely having a plan of his own. Ladislav attacked with all of his creatures, taking Nicolai down to twelve. The second Aven Windreader then joined the troop.

Nicolai played the Balshan Griffin to block. The next attack from Ladislav took Nicolai down to eleven, but he lost his chaser as Nicolai used the Griffin's return-to-hand ability after putting damage on the stack.

The table seemed heavily in Herzog's favour as he had two zealots. If he could manage to hit threshold, the game could be his. However, Ladislav just kept playing out his flyers and once again putting pressure on Nicolai, as he had more life more creatures. Ladislav realised that his creatures were not as big and bad as Nicolai's to attack. He sacrificed one land to the Cephalid to get a better card, drew the Firebolt and used it directly to take away the griffin. However Nicolai sacrificed his two Debris and played out the Embolden to save his griffin, and achieving threshold at the same time. As predicted, this was a definitely a game breaking moved of the game. The life standing at this moment was 19-9 to Ladislav.

After using the Cephalid's card drawing a few times, Ladislav played out his Dreamwinder, while Nicolai just played a Mystic Visionary and passed the turn. The match was stalled for a few turns. Time was ticking. The first action was from Ladislav as he Repelled one of Nicolai's zealots. The following round Zupancic played another Firecat and attacked with all of his creatures, which surprised Nicolai a bit. After a bit of consideration, Nicolai made good judgement in declaring blockers, succeeding in killing all of Vadislav's flyers, with the help of an Embolden. This proved to be a crucial move of the game. He managed however to take Nicolai down to four life, while having twelve himself. If Ladislav could manage to draw a burn spell, he could have manage to take the match, but he put himself at risk at the same time as he could now no longer blocks Nicolai's creatures.

After the attack phase, all Ladislav could produce was a little Millikin. Nicolai declared during his turn that it was now face-slapping time from his side. Despite that, he attacked only with the Visionary which caused a laugh from his opponent.

He then played the Windchaser and Volcano Sprayed the Millikin. After declaring blockers during his opponent's next turn attack step; knowing the match was his, Nicolai extended his hand with a victory smile. With one island in hand Ladislav had nothing else to do but signing the score-sheet and excepted the defeat.

Nicolai is now one foot in the top 8, as he only needed a draw from the last two rounds. Congratulations Nicolai, on a good performance.