ith the results of Round 11 locking the Top 4, the pressure was off for the competitors. "This is nice," said Ben Stark, "We get to play a nice relaxed match with nothing on the line but a Pro Point." After a hard-fought two days, they've earned it. Though the final standings are still to be determined (Stark will either be 2nd or 3rd) this match could be a preview of the Finals. In a stacked tournament like this, you're bound to wind up with a blockbuster conclusion, but I don't think you could ask for better than "The Newly Inducted Hall of Famer" vs "The Comeback Kid."

On the left, Ben Stark, arguably America's best Limited player, who was voted into the Hall of Fame just this week. And now he's closing in on another accolade. For Modern he and his teammates chose Blue-White-Red Flash, a deck full of options and equipped with a robust sideboard.

On the right, Reid Duke, the Magic Online wunderkind who grew into a Pro Tour sensation. Qualifying for the World Championship by winning his last match of the season (no pressure!) he's made the most of his opportunity, making good on his promise to overwrite last year's disappointment with excellence.

As they shuffled up, they chatted about their coming playtesting for Sunday's matches, as Duke was forced to mulligan down to six, and then five. I asked how they'd enjoyed the Championship as a whole.

"Yeah, I love this tournament," replied Duke, "even last year when I was getting worked."

They shared a laugh. 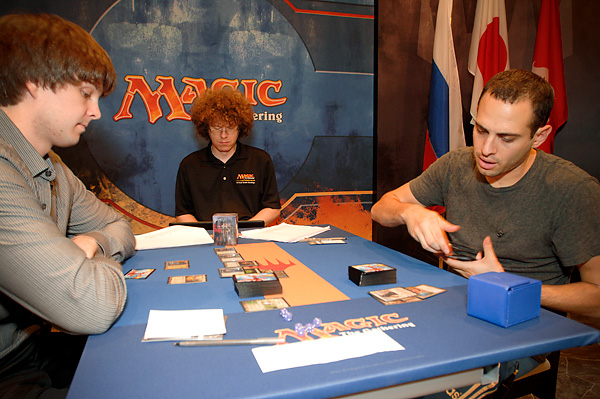 With the pressure off, Reid Duke and Ben Stark played out their final match in hopes of earning another Pro Point.

Duke kept his five and started with Gladecover Scout, then Spider Umbra and Slippery Bogle, hitting for two. Stark had led with Celestial Colonnade and an Arid Mesa, but had no counterspell for Unflinching Courage on turn three. Already Stark was at 13.

He gamely fetched a Mountain for Lightning Helix. He took another 7 when Duke added Rancor to the stack of enchantments, and could only cycle Electrolyze. He fell to one the following turn, and only managed to survive one more thanks to Gideon Jura, the expensive fog. 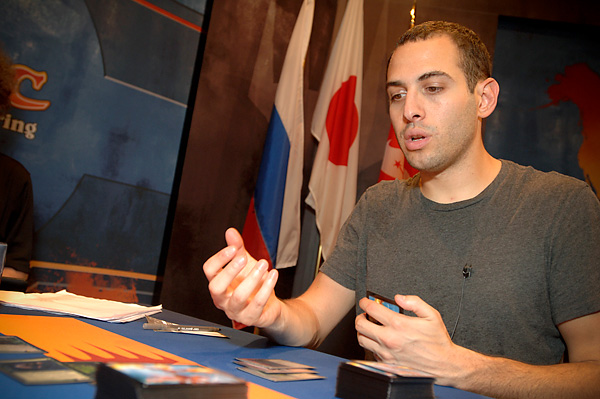 Gideon Jura is a very expensive Fog, but Stark did what he could to survive.

Duke's deck refused to make it easy on him, and he was quickly down to five cards again in the second game.

"It's weird. In most matchups, your opponent mulligans to five and the game is just over for them, but here it doesn't matter as much." - Ben Stark

Though Duke again had the turn one Gladecover Scout, Stark was on the play and had Mana Leak to stop Hyena Umbra. Duke played Ethereal Armor and hit for 2. Next, Daybreak Coronet fell to Spell Snare, and the turn after, Mana Leak took care of Hyena Umbra.

Stark played his fifth land and tapped them all immediately. Duke went to scoop up his creatures, but Stark showed him Baneslayer Angel. It got an appreciative nod from Duke. It very quickly beat him up, with a little help from Snapcaster Mage.

For the deciding game Duke was quick to head down to six, and Stark considered joining him.

"This hand is very flawed... I think I have to keep this."

He did. Duke's six were good enough, and they were off. Duke opened with Slippery Bogle into Spider Umbra and Etherial Armor, hitting for four. Stark took another two to get his Hallowed Fountain untapped. Duke tried Hyena Umbra, but it met Mana Leak. Duke played Horizon Canopy and cycled it at end of turn, then untapped and paid one. 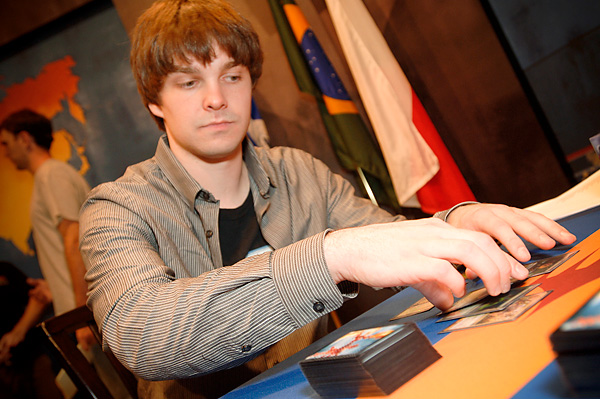 Duke's deck is well positioned for this Modern metagame.

"This turns off Snapcaster?"

Duke swung in with his 4/4 Bogle, and bad things happened. First Wear took care of Ethereal Armor, then Snapcaster Mage dove onto the field for a block, forcing the sacrifice of Spider Umbra. Stark untapped and Pyroclasmed away the Bogle. Duke shrugged and played out his Dryad Arbor, but now things were getting out of hand. Gideon Jura hit play, followed by Baneslayer Angel. That was more than enough to take the game and the match.

Naturally both Duke and Stark were looking forward to Sunday. I asked them about their semifinal matchups, and both were optimistic.

Talking about his matchup against Josh Utter-Leyton, Duke said, "Josh is playing the only deck that I get better against after sideboarding, which is huge." In a best of five, having the better deck for four sideboarded games is an enormous advantage.

On the surface, Stark and his semifinal opponent Shahar "The Future" Shenhar are playing similar decks, but the differences are key, says Stark. "I have four Spell Snares to his two, and in the long game they are so good because they answer Snapcaster Mage." He also has an extra Cryptic Command and fewer removal spells, much better equipped to fight the control game. After sideboarding things get even more split, with Shenhar's deck veering more towards aggro. With two days to test it will be interesting to see what strategies they come up with for the deciding games.