Round 12: Noah Boeken vs. Alex Shvartsman 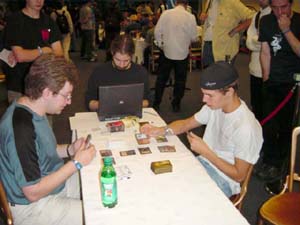 This was a blue-black-red control mirror match, but the two players had quite a few different cards between main and sideboards. Of note Noah has an Obliterate in his sideboard, which could be interesting, but Alex has Blazing Specter. In the main it was felt that Noah had the advantage due to the Lobotomies.

Noah won the toss and elected to play first, with both players laying an Urborg Volcano, Island, then Nightscape Familiar. Noah's Familiar then attacked - coaxing the block, then he 'Fired' the opposing creature. Alex responded with a Pyre Zombie, which was a fantastic early draw for the American. Realizing he was under the gun, Noah then cast a main phase Fact or Fiction to find some answers producing: 2 Excludes, Undermine, Fire/Ice and Recoil (Noah took a Fire/Recoil pile). Alex attacked with the Zombie, then cast Urza's Rage on the Familiar.

Noah then passed the turn and chose to 'Fire' the Pyre Zombie in Alex's next attack phase, which Alex then Undermined, but Noah chose not to Gainsay the Undermine. Managing to then draw his own Pyre Zombie Noah immediately laid it to block his opponent's, and the two creatures traded off and started recursing back into play - Alex braving the Lobotomy for one turn. Meanwhile one of Alex's Fact or Fictions was 'Gainsaid' (2 main deck for Noah) and he continued to struggle for mana, with only 4 lands in play - one of which was dealing him a fair amount of damage. 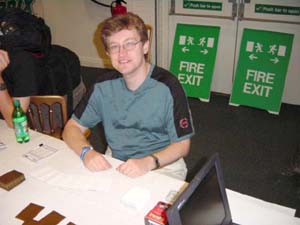 With Alex tapped out to lay his Pyre Zombie and a Nightscape Familiar, Noah drew and played a Lobotomy and looked at the choice of Exclude, Gainsay, Prophetic Bolt and 2 Voids - he took the Voids. After a few exchanges of Fact or Fictions (Alex's second resolving and Noah's getting Gainsaid in his opponent's turn), Noah then resolved a Yawgmoth's Agenda, but was vexed when Alex managed to play his third 'FOF' into his own Agenda (the cards being split Agenda or the rest). However, Alex did not manage to cast it as Noah cast Fire on Alex's Familiar. With only five land on the table this was a crippling blow for the American as he knew that Noah had enough burn to finish him off if he did not have the mana to cast his own spells - the familiar effectively creating much more mana than any land could.

Sure enough, Noah burned him out to win game one.

The thing to notice here is that Alex chose to board in all fifteen cards, believing that creatures was the way forward, and hoping that he might get something recoiled so his 'Pods' could take effect.

Casting Addle on turn 2, Shvartsman was surprised to see an Obliterate in his opponent's hand, and took an Undermine having named blue. Alex started the offensive quite quickly with a turn 3 Pyre Zombie, then a turn four Dodecapod, whilst Noah cast his own Addle (taking an Undermine), his own Pyre Zombie, then an Emblazoned Golem. The Golem proved to be large enough to stop the Dodecapod offense, so the board position ended up with both players having an Artifact and a Pyre Zombie in play. The next turn none of them were in play as creature combat took place, but the Zombies both returned to the fray in no time.

Noah, realizing that continually recursing the Zombies was advantageous for him as his opponent had only two red sources and hence could not fling the Zombie after stacking damage, started burning it with Rages before he attacked.

One of Alex's Fact or Fictions revealed the sideboarded Blazing Specter, which was subsequently played along with a friend on the following turn - Noah took 4 damage, discarded a Gainsay and a Pyre Zombie then cast OBLITERATE! Whoa . . . . . . ..At this stage Boeken had two land in hand whilst Shvartsman had none.

For the next few turns both players searched for mana until finally Alex played a Dodecapod from the hand, which was Excluded. Then Noah cast a Lobotomy - taking Undermines, seeing Emblazoned Golem and a Couple of Gainsays. Having taken the Undermine Noah said "Ah damn I should have taken the Golems!", but it was just a bluff: In his next turn the Dutchman cast Void for two taking out both of the Gainsays and the Golem, but Shvartsman then drew another Golem and played it immediately.

However, Noah gained the advantage as he had red mana available whilst Alex had not drawn one source since the Obliterate. To top this Noah also managed to draw a Nightscape Familiar which could continually block the Golem, which was eventually killed by the Pyre Zombie.

It seemed like Alex drew his red source too late (an Urborg Volcano) as by this time Noah had 9 land to his opponents 5 and had managed to resolve two powerful Fact or Fictions which had destroyed Alex's hand. With only two cards to his adversary's 6 Alex then proceeded to have all of his spells countered and Noah coasted to victory.