Round 12: Noah Boeken vs. Nicholas Olivieri 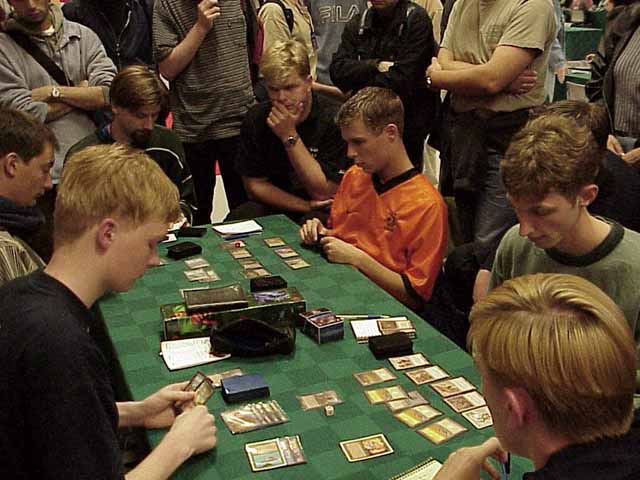 Matches for the top eight take on a different type of intensity than other matches. Noah Boeken is a strong player on a recent hot streak, but attempting to make a top eight at a major event, especially after have lost the previous two matches builds a lot of pressure. Boeken was practically pleading for a draw before the match with Olivieri who assured him that he couldn't.

Game one began with a Boeken mulligan and you could see that he was feeling the heat. His 6 card draw was decent though, and both players played two land to begin. Boeken, playing Stompy, started with River Boa. Olivier, playing Replenish needed a third land to get things going. He missed his turn 3 land drop and things were looking up for Boeken. Boeken followed with Rancor and Giant Growth, then a Lyrist, all from Gaea's Cradle mana. Olivieri looked anxiously at his last draw, hoping for a third land, but it was not to be and Boeken won the first.

Between games, Boeken still asked Olivieri about drawing. Knowing that a draw would put him in the top eight, nothing could hurt from asking. Olivieri would have none of it though, because he was sure that he had no chance with a draw. The second game started fast for Boeken. He played Wild Dog turn one, then a Lyrist. His third turn was another dog and a Gaea's Cradle. He used the Cradle mana for a Tangle Wire, which might have slammed the door, had Olivieri not had a strong draw. Olivieri had played an Attunement turn three so when the Tangle Wire came down for Boeken, Olivieri was prepared. He untapped and calmly tapped his lands for mana, then drew a card. He Attuned with the mana floating, then cast Frantic Search. Unfortunately after all the dust cleared, there weren't that many enchantments in Olivieri's graveyard save 2 Attunements, a Seal of Removal and an Opalescence. Olivieri dropped a land and used Replenish to bring all those enchantments back. He then used the Seal on the Lyrist to keep his Opalescence around. 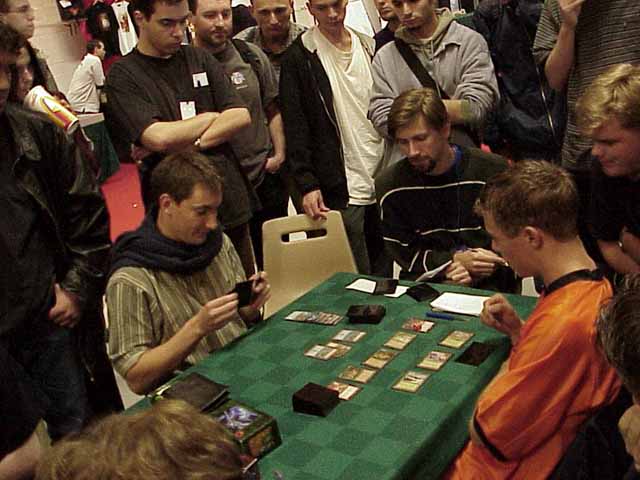 Boeken wasn't going to go down so easy however. He laid a Foundry, dropped a Treetop Village and replayed his Lyrist. Here came the weird part. With 3 counters on the Tangle Wire, Olivieri decided to use both Attunements at the beginning of his upkeep. He hadn't even tapped for Tangle Wire, so it was an eccentric play to say the least. I suppose he was looking for a Frantic Search, but didn't find one. He was forced to tap his lands and he passed the turn in bad shape. Boeken attacked for 9 with 2 Wild Dogs and a Wild Might, putting Olivieri at 6. Olivieri untapped and used Wrath of God, taking one point of damage, to clear Boeken's side. Boeken used his Lyrist to clear off Opalescence and Olivieri passed the turn. While it might have gotten interesting had Olivieri gotten another turn, it was not to be. Boeken untapped and activated his treetop village and with the Cradle, Rancored up the Village. He attacked for exactly 5 to finish off Olivieri and make his first top 8 at a major event. Congrats Noah!