After a great 8-1 start, Olivier had to win just one out of his last three matches, but he managed to lose the last two in a row so he only had one chance left. His opponent is a former National Champion of Scotland, where he spent a year studying, and he was also in the position of needing to win to make the Top 8. 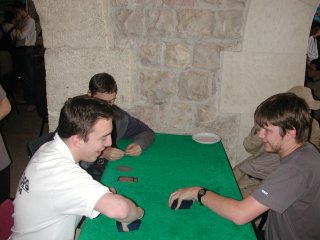 Sylvain started and played a Meddling Mage on his second turn stopping Wrath of God, and then a Rishadan Airship which Olivier had to Counterspell. Ruel Absorbed a second attempted Meddling Mage putting him back level on life as both players were taking damage from Adarkar Wastes.

The Mage continued to be the sole threat on the table as Olivier cast Dismantling Blow on a Chimeric Idol. Sylvain then summoned both Ramosian Sergeant and Longbow Archer, prompting Olivier to use Last Breath on the Mage in order to cast Wrath of God.

While Olivier was tapped out, Lauriol cast a Voice of All, but it was held at bay by a Story Circle. Ruel began to gain card advantage with Accumulated Knowledges and a Fact or Fiction.

The Fact gave him a Mageta, the Lion, but Sylvain held it off with another Chimeric Idol. Two more Knowledges gave Olivier three then four cards, and he showed his hand to Sylvain who conceded as he had no way to beat so many Counterspells and his Idol was about to be Dismantling Blowed.

Olivier brought in more Wrath of Gods, Routs, and Last Breaths. As in the first game, Sylvain had a second turn Meddling Mage naming Wrath of God. Again Olivier had a Counterspell for Sylvain's third turn play, which was a sideboarded Rootwater Thief this time, but Ruel had to allow a Ramosian Sergeant into play.

Olivier cast Rout on his fourth turn and Lauriol did not have a Counter. All he could do was play a Longbow Archer and Ruel seemed in total control when he played a Mageta, the Lion on his sixth turn.

Sylvain's predicament became even worse when he played a Glorious Anthem and attacked with the Archer, as Olivier used Dismantling Blow allowing Mageta to kill the Archer. Sylvain played a second Archer and the players started to race, but Lauriol wasn't far enough ahead to win when he was trading two damage for three every turn.

Eventually he had to play another creature, and Olivier used the Lion's ability to clear Sylvain's side of the board. This was the last play of the game as Ruel cast all four Fact or Fictions in his deck, and all the Accumulated Knowledges to find the cards to keep the path clear for his Mageta.