Round 12: Ondrej Baudys vs. Rickard Osterberg 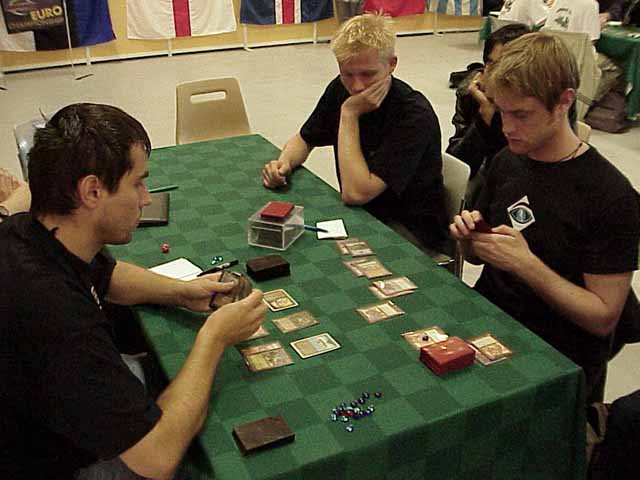 Ondrej Baudys and Rickard Osterberg sat down for round 12 exactly where they hoped they would be when the tournament began: playing for Top 8. One match for all the prestige (and money) that comes with a Top 8 finish at a major event. Baudys was running a Trinity Green deck with Processors while Osterberg was running Accelerated Blue. Baudys was the experienced veteran in this matchup - he's a 2-time Czech national champion with a lot of Pro Tour experience.

Baudys had a pretty good draw versus mono-blue in game one: Llanowar Elf, Vine Trellis, and Tangle Wire. However, he didn't have any offense. Plow Under and then Tangle Wire #2 kept Osterberg pinned down for any turns, but Baudys just couldn't find any way to put away his helpless opponent. By the time Baudys drew a Processor, Osterberg had a Keg with 3 counters in play and untapped mana. Osterberg let the Processor resolve even though Baudys had four mana left over since Osterberg had a second Keg available to destroy the lone minion. On his next turn Baudys was forced to just hope Deranged Hermit would resolve - not a very good bet. Osterberg then cleaned up quickly with Masticore. Baudys had him disrupted early, but he just couldn't find an offensive threat in time.

Baudys led with Llanowar Elf and then Rofellos in game 2. Osterberg played a couple of Islands and crossed his fingers. Baudys started his third turn with Tangle Wire, which Osterberg stopped with Counterspell. Baudys had enough mana left over to then cast Skyshroud Poacher. Osterberg knew he was in trouble so on his third turn he played Grim Monolith and tapped out for Masticore. Baudys untapped and Splintered it. Ouch. When Osterberg realized that Baudys still had enough mana left to recruit a Hermit with his Poacher, Osterberg conceded. Thus it took Baudys only four turns to even the match at a game apiece.

Osterberg used Daze to stop Baudys' first turn Bird of Paradise by returning an Island to his hand, but he had no answer to turn 2 Rofellos other than some mana acceleration of his own: Grim Monolith. Baudys Splintered the Monolith and saw that Osterberg ad 3 Kegs in his hand, a Morphling, and a Somnophore but no land. One Keg came out and Baudys played a Blastoderm. Osterberg chose to Port Baudys instead of casting a second Keg, but Baudys drew a third land off the top of his deck and not just any land - it was Gaea's Cradle. 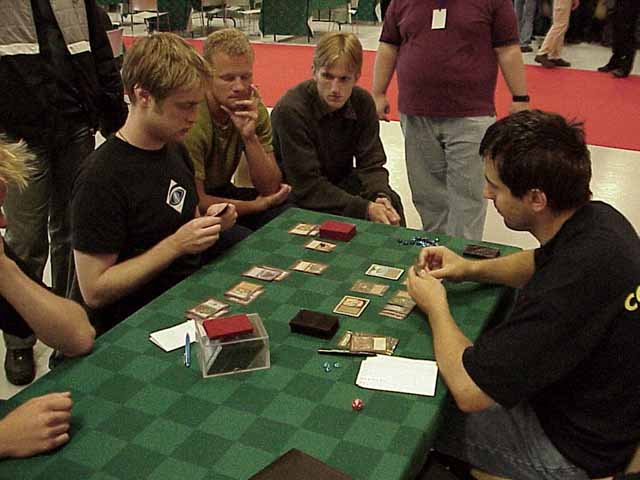 Baudys decided just to Splinter Osterberg's Keg. Osterberg sacrificed it, of course, and got to keep the other two that were in his hand. I don't know what else was in Baudys' hand, but the Splinter play seemed curious at best. Baudys followed with Deranged Hermit on his next turn, but Osterberg was able to Keg away all the squirrels, untap, and then draw the fourth land he needed to lay Somnophore.

Blastoderm dealt 15 points of damage, but after taking that beating, Osterberg actually managed to stabilize the board. Baudys tried for Blastoderm, but Osterberg Miscalculated it. Osterberg then cast Treachery to steal the Deranged Hermit and power down Baudys' Cradle. He also used his last Keg to destroy a Vine Trellis. That plus two Ports kept Baudys' mana completely pinned down. After that Osterberg added Masticore to his side and when Osterberg Submerged a new Vine Trellis, Baudys just hung in head. Baudys felt he should have won this game, but he didn't - Rickard Osterberg advanced to the Top 8.