Normally jovial and talkative, both David Williams and Brian Kibler sat down to Round 12 of Pro Tour Philadelphia in stoic silence. They surely had the same thought on their mind: making the Top 8. With only two losses a piece, they were well within reach, but both were capable players and knew their run would be a tough one. They probably needed to win the round, then two following it, to move to the final table. 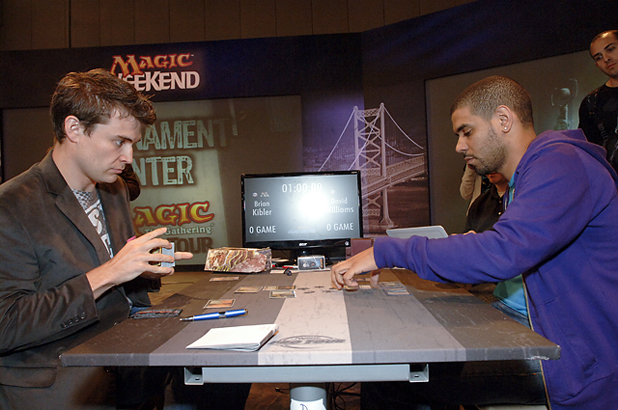 This might be the most solemn photo of Brian Kibler and David Williams that has ever been taken.

Brian opened on Noble Hierarch, his Zoo list showing its close similarity to the deck he used to win Pro Tour Austin. His opponent started on Amulet of Vigor, a clear indication he was playing the popular Twelvepost archetype, then exploded with Explore and Ancient Stirrings to dig deeper into his deck. Gaddock Teeg from Kibler promised to slow the pace at which Williams could cast game-ending spells, though he was still able to drop Emrakul, the Aeons Torn should he desire.

Working on building his ground forces, Brian cast a Tarmogoyf to get his beat going while Dave focused on continuing to build his side of the battlefield and to come up with a solution to Gaddock Teeg or a means of beating through it. He also had a Glimmerpost to recoup some of his life lost to the Tarmogoyf and then an Oracle of Mul Daya to help with land drops; after careful consideration Brian used Path to Exile to take the 2/2 out forever. 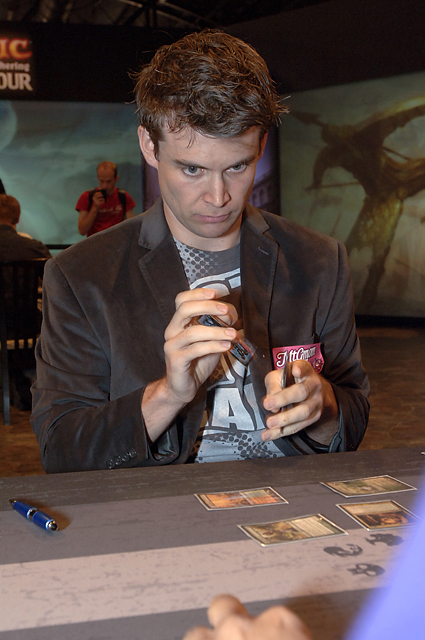 A surprise Bant Charm from Kibler laid waste to Williams's Amulet of Vigor, forcing the gaming star to play his Cloudposts the fair way. Like a pro, Dave promptly drew another Amulet from the top of his deck and cast it. He then cast a Terastodon that blew up one of his opponent's lands and two of his own permanents to yield him a field of monstrous creatures and a commanding lead. Kibler gave no indication that he was displeased with the turn of events, but it wasn't looking good for him. He did have a second Path to Exile to take out his opponent's Terastodon, and when Dave went looking for a basic land to play he failed to find one.

The board state was effectively back to even, with Brian able to attack with an Elephant from the Terastodon (though nothing else) while Dave gained life with another Glimmerpost. Brian continued working to pressure his opponent's life total with attacks and soon the fact Dave kept missing action from the top of his deck began to matter. Down to 8 life, he was going to have to begin chump-blocking his opponent's creatures.

Brian had a different plan, however. He cast Elspeth, Knight-Errant and used her to jump his Tarmogoyf. That meant his opponent was taking exactly lethal damage provided he had no tricks. Alas for poor Dave Williams, Twelvepost isn't known for tricks so much as brute force, and the players headed to the second game with Kibler in the lead.

"I didn't think I was going to win that game..." Brian commented as they shuffled for the second.

"Me neither," Williams grumbled.

The second game started off with a mulligan for Dave while his opponent stayed on a full grip of seven, but Williams came right out of the gates with a Green Sun's Zenith for zero. That might look odd, but Dave searched for a tricky card many Twelvepost decks are running: Dryad Arbor. The land creature allowed him to effectively Rampant Growth on his first turn. It was an awesome play... and despite playing an entirely different archetype, Kibler copied it exactly on his own turn! Both had two mana before the second turn and could even attack if they wanted!

Following up the Zenith, Dave cast Amulet of Vigor, While Kibler simply played a land and passed. What was Brian up to? If he didn't start beating down against his opponent, he was going to be in trouble! Dave played a land and passed as well, and his wily Zoo foe revealed why he had been slow to cast anything: he was waiting to drop Aven Mindcensor. The 2/1 made it tough for Dave to search his library, but he quickly dispatched it with a Beast Within. Unfortunately for Dave, he was now facing an Elspeth, Knight-Errant his opponent had landed.

What was Dave to do? He reached to the top of his deck and drew. "That was a good one!" He exclaimed, revealing a Summer Bloom. Members of the audience had to lean in to read it, but Dave quickly revealed why it was so good: with Amulet of Vigor he was able to play Gruul Turf repeatedly, bouncing itself but gaining two mana each time he did so. That allowed him to cast Primeval Titan, which fetched him two Cloudposts (untapped) and allowed him to pass with a dominating board presence, including Primeval Titan.

With the turn back, Brian worked to undo his opponent's gains. Did he have Path to Exile for the Titan? He began attacking with his Beast token from Beast Within, pumped by Elspeth. Then he cast Green Sun's Zenith for Gaddock Teeg and dropped a Wild Nacatl too. He had exactly one white mana available to him after the turn, and passed.

Dave drew Scapeshift, worthless with his opponent's Teeg on the table, and tried to figure out his turn. He moved to his combat step, but Kibler revealed he did indeed have the Path, and sent the Titan packing. That meant Dave couldn't get two more Cloudposts with the 6/6 to fuel an Eye of Ugin search and hardcast Emrakul, the Aeons Torn all in the same turn. Instead, he played the Eye and passed at 14 life, hoping he could survive the next turn. 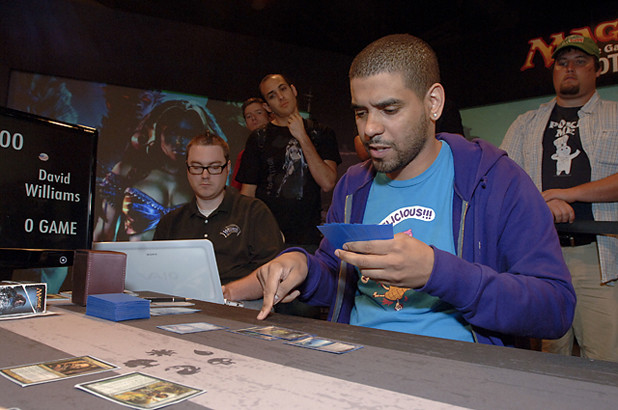 Williams does the math.

Brian sent his team sideways to drop Dave to 3 life. He set back Dave's hopes at casting Emrakul, the Aeons Torn by blowing up one of his Cloudposts with Tectonic Edge, and by the time Williams was untapping, his odds looked grim. Eye of Ugin had fetched him up a 15/15 Eldrazi, but he needed a powerful topdeck to have any hope of casting the fifteen-mana creature.

Once again he moved to his library and found... Cloudpost. It wasn't good enough, and he conceded.

"One match at a time..." Brian Kibler exhaled as he picked up his cards.