Round 12: Order in the Court

xcitement levels were high as these competitors sat down for one of the final rounds of U.S. Nationals. Krempels, a former Champion himself, was hoping to return to his former Team USA glory. Sadin, on the other hand, was last seen winning Grand Prix Columbus, and doing his best to weather the antics of his opponent as well as those of neighbor feature match participants Kyle Sanchez and Pat Chapin.

Sanchez, leaning in to Krempels who was sitting on the same side of the table, asked, "Judge, can you ask the Head Judge if we can play this match as Two-Headed Giant?" 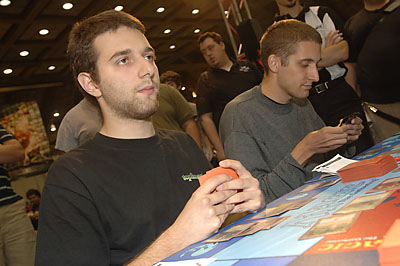 Sadin won the die roll and after Krempels spent some time mulling about mulliganing, elected to keep 7.

Steve was first out of the gates with a turn-two Tarmogoyf, a popular play for his white-blue-green Blink deck. Krempels opted to pump the 'Goyf on his turn with a Castigate, nabbing Sadin's Edge of Autumn and seeing two Loxodon Hierarch, a land, and a Remand. Sadin could cycled the Edge in response to the play from Krempels, sacrificing his Flagstones, but had opted not to.

After a few turns the life totals stood 21-16 in Steve's favor and his board consisted of the 'Goyf, a Hierarch, and a Treetop Village amongst his four lands. Krempels, on the other hand, had accumulated six mana, counting his two Signets, and a Court Hussar which spent its time blocking the Tarmogoyf (a 1/2) and attacking thanks to vigilance.

A second copy of the 1/3 joined the board for the former Champ, and he flitted through the three cards for a few moments before making a selection. A second Castigate came down, but Sadin had a counter. It wasn't, however, the Remand Krempels was obviously expecting, but a Mystic Snake instead. Feeling free to resolve a large threat from his Solar Flare deck, Krempels spent the following turn on Skeletal Vampire. Sadin moved to counter, but instead of tapping two for Remand tapped all four of his lands again representing a Mystic Snake. He paused, then reconsidered and played the Remand, giving up information from his hand or possibly bluffing his opponent.

In any case, Craig was certainly backpedaling. His life total was a measly 8 to Steve's 18, and when Sadin brought his team, consisting of Mystic Snake, Hierarch, and Tarmogoyf, Craig was forced to drop to 4. On his potentially final turn he drew his card and began to think. His Court Hussars vigilanced into the Red Zone against Steve's tapped out board. Post-combat Skeletal Vampire came back down, and Steve played Venser. Krempels had Remand for the 2/2 and the Vampire finally hit the board.

Steve untapped, and it was his turn to think things through. He was close to victory in the game but his opponent was far too wily to go down without a fight, and he needed to figure out the best path of attack through Skeletal Vampire while his opponent was tapped out and unable to go bat crazy. Ultimately he decided to pass the turn, completely untapped with access to six mana, three of it blue, and a Venser in his hand.

Krempels took the extra opportunity to play a third Court Hussar, but at the end of his turn the Venser returned to play targeting Skeletal Vampire. Krempels made a single Bat, then returned the 3/3 flyer to his hand. Steve simply untapped and drew, then went back into the tank to figure out his attack. Eventually he decided to send everyone in, though he didn't opt to activate his Treetop Village. All told a Venser, Mystic Snake, Loxodon Hierarch, and Tarmogoyf (set to 2/3) came crashing towards Krempels. Craig, with three Bats and three Court Hussars, wasn't sure what to do. He wasn't likely to wipe out much of Steve's board as the New Yorker could always activate his Loxodon Hierarch to save the team, but he was at a very precarious 4 life.

He decided on double-blocking Venser and Mystic Snake while chumping the other two creatures. Post-combat Sadin played his second Hierarch, then suspended a Riftwing Cloudskate. Somehow Krempels had survived the turn and was going to have a chance to regain control of the game. His three Hussars charged in, with one dying to Steve's Hierarch, then Craig made Damnation and Skeletal Vampire. Things had drastically changed for Steve, who simply removed a suspend counter from his Riftwing Cloudskate and played a third Hierarch. Krempels answered on his turn with a second Skeletal Vampire and an attack with two Bats, putting the life totals at 19-4 in favor of Sadin, though the game state no longer was.

Sadin drew for his turn, played a land with a single card in hand, and said go. Krempels untapped and immediately counted up his plentiful mana, never a good thing for the player facing the Solar Flare deck. Fortunately for Steve it appeared Craig was simply looking to see how many Bats he could make, not threatening Akroma.

Passing it back, Steve's Riftwing Cloudskate came down to bounce a Skeletal Vampire, but a second from his hand was met with Remand from Craig and Steve, concerned with how long the game was taking and aware he had lost control, conceded.

The table had become silent after the frenzied chattering so rampant prior to the match, but both players were focused on one thing: the Top 8. Sadin opted to play first, which got a halfhearted effort at goofing around from Krempels, who questioned the decision. 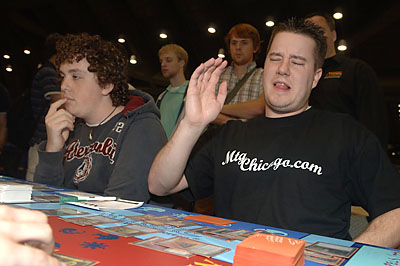 …but opponent Craig Krempels (with would-be second head Kyle Sanchez) engages in some kind of shenanigans.

Steve led with a Treetop Village and was first out of the gates with plays, again suspending Riftwing Cloudskate on turn two. Krempels countered with a Signet of the blue-white variety and Steve's turn-three Tarmogoyf was stymied by Krempels's turn-three Court Hussar. In addition the Champ had played a second Signet, putting him at five mana on the third turn to Steve's paltry three.

Steve untapped and suspended a second Cloudskate, but things weren't looking good for him when he passed without a third land drop. Craig took the time on his turn to attack for one with his Court Hussar then suspended an Aeon Chronicler for one before passing the turn. Steve's first Cloudskate came into play, bouncing one of Craig's lands (and potentially pumping the Chronicler), but he again had no land and no play.

Craig's Chronicler came down and became an 8/8 after he drew for the turn. Following his attack step the life totals stood 15-8 in his favor. His Castigate drew a Momentary Blink in response from Sadin, targeting Riftwing Cloudskate. Craig countered with Slaughter Pact on the 'Skate, and the discard spell nabbed Venser. Cautious about forgetting to pay for the Pact, Craig placed a coin on top of his library to remind himself not to lose.

Sadin, looking dejected, drew his card for the turn and beleagueredly passed. Craig paid for his Pact, then drew for the turn and bashed with Aeon Chronicler. Sadin opted not to block and dropped to 2 life, very likely dead on the following turn.

Sadin's second Cloudskate finally unsuspended, returning Craig's Chronicler, but Steve couldn't afford to get in with either his Tarmogoyf or his Riftwing for fear of dying to Craig's double Court Hussar. Steve passed and Krempels resuspended his Chronicler for a single counter before playing an Azorius Chancery. A Hierarch from Sadin bought him a tiny cushion to attack with his Cloudskate but the Chronicler was still a significant threat. When Craig revealed double Slaughter Pact for both of Steve's blockers, Steve extended the hand.