Round 12: Osamu Fujita vs. Junichi Kinoshita 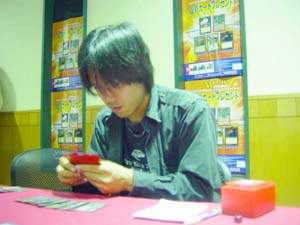 Osamu Fujita's glower is a familiar one. He's best known for grimacing at cards during team competitions, but this weekend he's been frowning in singles competition. His opponent, Junichi Kinoshita, is a solid player from Osaka who has yet to earn himself a star finish.

Fujita was ready for Kinoshita's start of Rootwalla, then Careful Study out a second Rootwalla. A pair of Innocent Blood stopped them cold. Wild Mongrel showed up just in time to fall to Chainer's Edict. Rancid Earth shut down Centaur Garden before it could become a factor.

Another Mongrel showed up to pester Fujita. He dopped his fourth land and played Diabolic Tutor. He was holding two Mind Sludges and a Mutilate. He went for the gold, picking up Mirari. Kinoshita punished him with a pitched Roar of the Wurm. Fujita failed to find a land. Kinoshita busted out Standstill and busted Fujita's face.

Finally a swamp for Fujita. He Mutilated, cracking the Standstill. It gave Kinoshita enough cards to save his Mongrel. Fujita had just enough mana left over to Blood away the Mongrel. The next attack left Fujita at two. Fujita ripped Cabal Coffers and re-used his Edict to dispatch the Wurm. Kinoshita had nothing left.

Now Fujita started to get excited. Skeletal Scrying put him to one. Kinoshita drew a Mongoose to go with his Standstill. Fujita paid it no mind. He copied a Pact and scored another Pact and Mutilate right off the bat. An uncopied Pact got him the Edict he needed to off the Mongoose.

Kinoshita dropped Mongrel. Fujita wrecked him with Mind Sludge and Mutilate. He drew Aether Burst. Fujita drew a blank. Next came Rootwalla. Fujita was forced to Edict it from the graveyard. Kinoshita saved. Fujita spent his last mana on Nantuko Shade, threatening a one-turn kill thanks to a pair of Coffers. Kinoshita pulled Werebear, playing both creatures. Fujita had nothing. He swung and killed one of the monsters, but the other finished him. 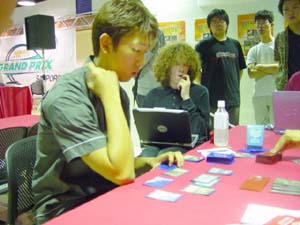 Kinoshita had a slow start for the second game, with no pressure on the board after turn two. A Rootwalla showed up late to the party, but was joined by Standstill. Fujita refused to wait, Tutoring up Mirari. Kinoshita drew three and then threw down Wild Mongrel, Studying away Phantom Centaur and land.

Fujita tapped out for his Mirari. Kinoshita swung for five and dropped another Standstill. Fujita Edicted and copied it. The Standstill served up a second Rootwalla to save the Mongrel. Rancid Earth removed Kinoshita's only forest. Kinoshita hit for three and played a third Standstill.

Fujita broke it with a double Edict. Kinoshita drew another forest, dropping Werebear and the final Standstill. Fujita didn't let it slow him down. A doubled Pact got him Mutilate and Tutor, and the Tutor in turn got him Screams of the Damned and Nantuko Shade. The Werebear took him down to seven. Fujita was ready for the Bearscape that came next.

Kinoshita's Envelops couldn't stop the Screams and Shade. He needed some action. Careful Study got him his Persuasion. He stole the Shade and swung for four. Fujita was at three. Now he was in trouble. He Pacted twice, getting swamp and Edict, the copied Edict getting rid of Kinoshita's team. Kinoshita played Cephalid Coliseum and gave it back.

Mesmeric Fiend shoed Kinoshita's hand of four Envelops, Wild Mongrel and Werebear. He stole the Werebear, then made Stalking Bloodsucker. Kinoshita made a pair of bears at end of turn, and cracked the Coliseum, crossing his fingers. It gave him Centaur Garden and Basking Rootwalla. He untapped, played the Garden, and then swung for the win.