Owen Turtenwald won the die roll and chose to go first. He also made the first commitment to the board, filling his hand up with a pair of Squadron Hawks. Shouta Yasooka countered them with a Ratchet Bomb. A Duress stole a copy of Jace, the Mind Sculptor from a hand that had a second copy of the planeswalker plus a Day of Judgment, Gideon Jura, and two Squadron Hawks. On the following turn, the remaining Jace hit play, immediately giving him a Brainstorm. When he was hit by an Inquisition of Kozilek, he revealed another copy of Jace as well as a Sylvok Lifestaff. 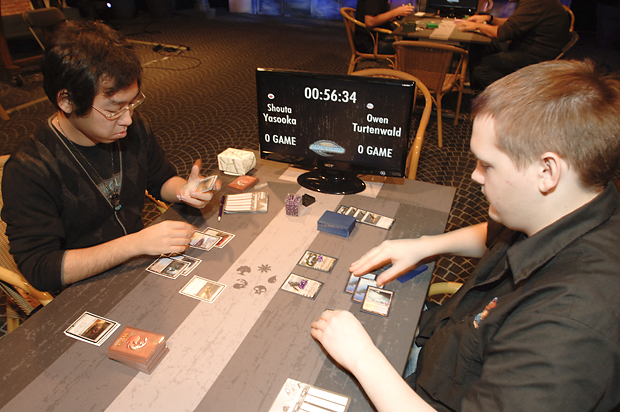 Shouta Yasooka, left, faces off against Owen Turtenwald and his planeswalker posse.

Yasooka got on the Hawk bandwagon, fetching up a trio of his own after blowing Turtenwald's away with the Ratchet Bomb. Unfazed, Turtenwald played Gideon Jura and forced the bird to attack him rather than his buddy Jace. A second Hawk hit the battlefield for Yasooka, and they started pecking away at Gideon. Turtenwald made a Squadron Hawk of his own, opting to trade it on Yasooka's attack rather than use it for his own offense. After another Jace activation, Turtenwald found himself a Tectonic Edge to protect himself from the threat of Yasooka's Creeping Tar Pits. When Yasooka tried to play a Jace Beleren to destroy Turtenwald's planeswalker, Mana Leak made sure that the Mind Sculpting engine would continue to provide Turtenwald the advantage.

Now secure behind his planeswalker fort and a sculpted hand of cards, Turtenwald fired. Day of Judgment cleared the board, allowing Turtenwald to start sending his Gideon Jura over for 6. His Tectonic Edge kept Yasooka from swinging in at Jace with his lands while Gideon was away fighting. Yasooka had his last Squadron Hawk to block the way for a turn, but Jace had Gideon's back this time, sending the bird back to Yasooka's hand. Yasooka attempted to put Gideon down with a copy of his own, but Turtenwald had a pair of Spell Pierces to force the issue. Yasooka conceded rather than let Turtenwald untap and kill him.

Jace, the Mind Sculptor is an incredibly powerful card, and one of the key cards in this matchup. Turtenwald's early and consistent access to him powered his win over Yasooka in game one. For the next game, Yasooka got to go first, giving him the potential to get his onto the table first. Turtenwald helped his advantage with a pair of mulligans.

Yasooka wasted no time, immediately fetching a Plains with his Marsh Flats to enable a second-turn Squadron Hawk. After a Preordain and an attack, he opted to add a second to his team. His deck now empty of Hawks, and his hand full, he looked to be in the same position as Turtenwald at the start of the previous game. An Inquisition of Kozilek was hit by a Spell Pierce, forcing Yasooka to tap out. Turtenwald then quickly revealed a hand containing no legal choices for the discard spell. 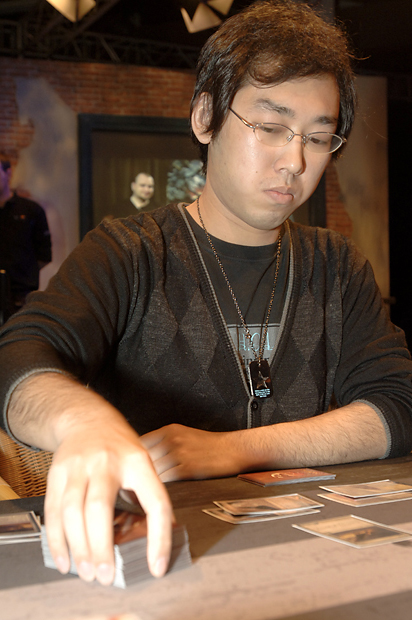 Turtenwald tried to stifle Yasooka's mana by destroying his second Creeping Tar Pits with a Tectonic Edge in an attempt to keep him from Jace mana. After a Preordain on his turn, Yasooka found a replacement. He also added one more Hawk to his air force, bringing him up to three in play. Turtenwald was running on his last card when a Duress forced the Gideon Jura he was holding from his grip. An attempted Jace, the Mind Sculptor on the following turn was Cancelled. Yasooka found one of his own and started in on Turtenwald's deck. It only took a couple of turns before Turtenwald, now drawing off the top of his deck, conceded.

The player to go first had won each of the previous two games, so it appeared that Turtenwald held the edge going into the last game. A mulligan might have shaken him a little had Yasooka not managed to mulligan his hand before Turtenwald had even picked up his deck to shuffle. The second mulligan he took was sure to bring him down, but Yasooka once again threw his hand in as well.

A Preordain on the first turn bought Turtenwald the chance to improve his draw some. The Stoneforge Mystic he made on the next turn gave him a win condition. He fetched out a Sword of Feast or Famine, which he no doubt planned on sliding into play with his Mystic. As expected, Turtenwald chose to use his Mystic to get the Sword down rather than risk losing it to counterMagic. Again, rather than chance getting blown out, Turtenwald simply attacked with his unequipped Mystic, preferring to leave counterMagic mana up. Only when he hit four mana, allowing him to equip and cast Mana Leak, did he give it the Sword. 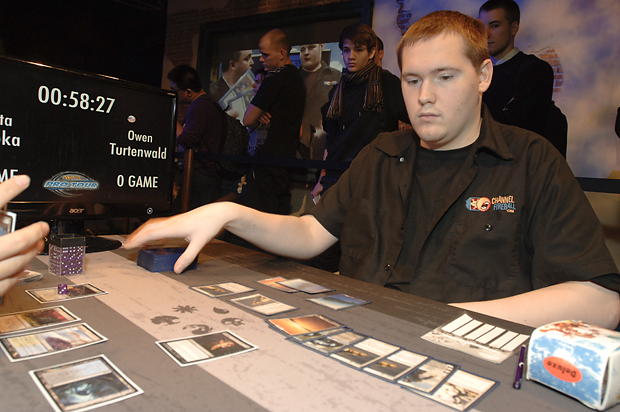 When Yasooka didn't give him a target for his Mana Leak on his turn, Turtenwald chose to use his Mana Leak to force through a Squadron Hawk. This filled his hand up, as well as giving him a bit more damage and another body to pick up the Sword should something happen. Yasooka was able to prevent a Sword of Body and Mind from hitting play with a Mana Leak, leaving him vulnerable to a Gideon Jura that came down on the following turn. He managed to clear the creatures out with a Day of Judgment, but Turtenwald held two more Hawks in his hand. He just attacked with Gideon and dropped the Hawks. With no way out, Yasooka conceded.