Round 12: Paul Reitzl vs. Brian Kibler 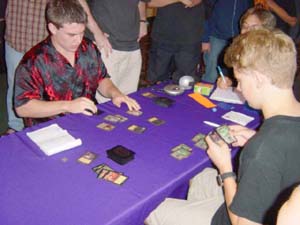 Round 12 found two mono black control decks of very different builds. On one side was popular Sideboard writer Brian Kibler, playing his often-copied version from Worlds. Kibler only changed a single card in the deck. He switched one Mind Sludge for a second Skeletal Scrying. Reitzl's deck was far more unorthodox. The Boston up-and-comer played a hybrid of mono black and Braids with main deck Faceless Butcher and Mesmeric Fiends. Reitzl has been branded with the nickname "Little Darwin" due to his ever present YMG t-shirt at tournaments.

Kibler won the die roll and decided to keep a one land hand. Reitzl mulliganed and kept. Kibler failed to draw land for the rest of the game and even lost his one turn three when Reitzl played Rancid Earth. On to Game 2.

The next game Kibler had land. Reitzl tried protecting himself from the Rancid Earth/Braids draw by playing a Cabal Therapy. He missed. Kibler had no land destruction. Paul then tried to keep Kibler down with his own turn three Rancid Earth on Kibler's two swamp, one Cabal Coffers draw. Kibler got away from mana screw thanks to a Tainted Pact. Kibler made a Shade that got cut up by Faceless Butcher. He found another Butcher for an annoying Zombie Token. He sacked it right away to a Cabal Therapy to remove the Skeletal Scrying he knew Kibler was still holding. This was the end of the gas for Reitzl's hand. Kibler removed the Butcher and beat Reitzl down with no resistance.

The next game saw Retizl keeping the one land hand. He drew into some land, but then he had to face Kibler's optimal Rancid Earth/Braids draw that he was worried about Game 2. Reitzl couldn't catch up from here, though he drew land after land to stay in the game. Kibler stayed in Braids control mode the entire game and eventually beat Retizl down in the end with a Braids and a Nantuko Shade.