Round 12: Peer Kröger vs. Jeroen Remie 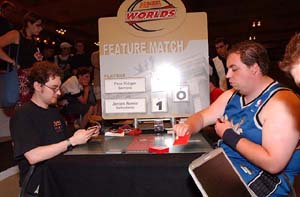 For those of you who were following Magic "back in tha day" might recognize the name of two-time Pro Tour Top 8'er "Peerless" Peer Kröger. Well, the original German has dusted off the wand and is taking Worlds by storm. He's sitting comfortably with a 9-2 record. Not as comfortable as Dutch dynamo Jeroen Remie. Starting with his Top 8 at Houston at the beginning of the season, Remie has been in top form. After going undefeated on the first day, he's only dropped a single match in draft, and he'd like to keep that streak alive.

Kröger led with Festering Goblin and got some damage in before both players dropped morphs on their third turn. Remie's bashed in, and then he tapped out for Aphetto Runecaster. Kröger untapped and revealed his morph to be Aphetto Exterminator, giving Remie a card but eliminating the Runecaster. He answered with a Covert Operative and held his ground.

Kröger attacked and Remie accepted the trade, losing what turned out to be a Volcanist. Kröger replaced his morph and added a Farseer. Remie busted out Lavamancer's Skill and started working over Kröger's team. He added a Thoughtbound Primoc and started serving for damage. Eventually Kröger hit eight lands to enable a Skinthinner on the gunning Operative, but the damage had been done. Remie added a Seaswift to his air force, and Kröger couldn't make the race close enough.

Again Kröger had the Festering Goblin in the second game, but now he was leading and was given the first opportunity to swing in with a morph. Remie had a morph of his own, a Skirk Marauder, and opted for the trade. Kröger's morph was Cabal Executioner. He replaced it with another morph. Remie dropped Aphetto Runecaster, forcing him to stay home. Kroger made another morph. Remie untapped and showed him Lavamancer's Skill. 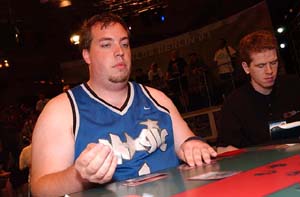 He shot down the first morph, a Sootfeather Flock, and was so excited about stopping the remaining Skinthinner with Mage's Guile that he forgot to draw a card for his Runecaster. It didn't matter. Sage Aven got him a Seaswift and Erratic Explosion in hand meant he wouldn't have to draw all those lands. Bladewing's Thrall showed up just in time to take the Explosion in the face.

Aurification from Kröger would have been gangbusters if not for Remie's Seaswift. Aphetto Exterminator took down the Runecaster (though this time Remie made sure to get his card), but soon after Remie showed him a second Skill. If only he could finish the Seaswift, he could stabilize. Infernal Caretaker got him back the Skinthinner, but he failed to draw an eighth land.

"Would have been good to draw a land there." – Peer Kröger

"Or a Vengeance or something." – Jeroen Remie