Round 12: Phoenix Foundation vs. A Little Too Sick 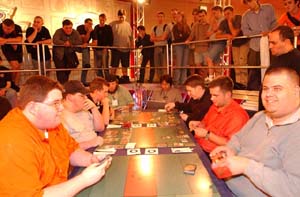 Phoenix Foundation vs. A Little Too Sick

While this match lacked any third day impact, there were plenty of reasons to watch this final round Feature Match.

Sitting in the "A" seats was a rematch of the Team Finals from Worlds 2000. For Phoenix, Marco Blume, and for Too Sick, Kyle Rose. Rose won the matchup in Brussels last year after Blume cast a Covetous Dragon with no artifacts in play. There is nothing Marco would like more than to payback Kyle by handing him a loss and costing the "Big Erhnam" some money.

In the "C" seats sat two of the top players in the world in Player of the Year, Kai Budde, and the Netherlands' Kamiel Cornelissen. Kamiel's deck was white, blue, and black with a touch of green to support Spiritmonger. Kamiel's deck also included a Lashknife Barrier, two Excludes, and a Confound. Kai's deck was 5cg with several top-notch spells in AEther Mutation, Jilt, and Agonizing Demise. Not to forget, the "B" seats had Too Sick's Eric Froehlich with 5cg and Dirk Baberowski sporting Probe, Fact or Fiction, Soul Burn, and Dromar's Charm in U/B/W along with TRIPLE Putrid Warrior. 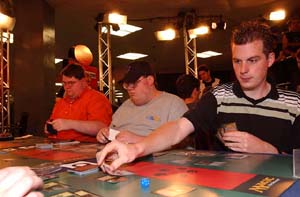 In the first game, Kai and Kamiel both got early starts. Kai had a green tapper and a green familiar and Kamiel made a Galina's Knight. Those two-power creatures trade, and Kamiel begins to take damage from a tapper. Cornelissen holds an Exclude, as Kai waits him out, sending the tapper until Kamiel gets to 16
At that point, enough was enough, and Kamiel cast Phyrexian Bloodstock. Kai got that guy out of the way, first with Repulse, then with AEther Mutation. In the following turns, Kamiel got two creatures killed, including the Bloodstock he needed to recast, and Kai proceeded to be relentless, punishing Kamiel for tapping out and winning in a few more turns.

Shortly after this game ended, Marco Blume took the first game from Rose and Rose started slowly in the second game, missing a fourth-turn land drop with just three Islands in play.

The "C" seat game began slowly as well. Few spells were cast, but eventually Kamiel got a 2/3 Emblazoned Golem and Lashknife Barrier on the table. Kai managed Stone and Penumbra Kavus, and when he attacked with his guys, Kamiel blocked the Penumbra with the Golem, and after damage, Kai gained some much-needed card and tempo advantage by Aura Blasting Cornelissen's Barrier. 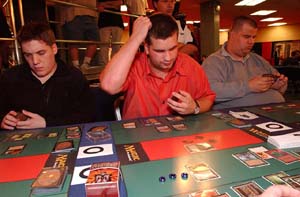 The game went downhill quickly for Kamiel. The German Juggernaut continued to pound the ground, as his foe sat helplessly with 5 black cards and no swamps. In the waning moments of the game, Kamiel drew a Swamp, but it was too late, and in a short match, Kai Budde wins 2-0.

Final Result: A Little Too Sick's 1-2 loss dropped them to 7th place overall with an 8-3-1 record.