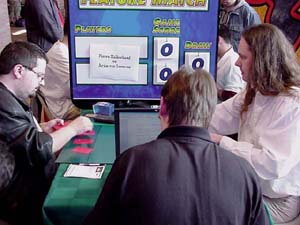 Pierre Malherbaud has twice been French National Champion and recently made top 8 at Grand Prix-London. Van Leeuwen is yet another of the good players that seem to be coming out of the Netherlands at the moment and has been enjoying a good run of form in the current Grand Prix season with a Top 8 appearance at Grand Prix-Antwerp to his credit

Malherbaud has a red-green deck with Mongrel, Roar and Arrogant Wurm. Van Leeuwen has a fairly mediocre black-blue deck. The winner of this round should probably be able to ID into the Top 8.

Malherbaud won the die roll and opted to play first. His start was not so good as he had to mulligan his first hand.

Van Leeuwen summoned a Frightcrawler, which he used to hold off Malherbaud's Krosan Avenger before ripping a Pardic Firecat and Flame Burst out of the Frenchman's hand with Last Rites.

Malherbaud then stuck on three land while van Leeuwen used a Gravedigger to get back the Torturer he'd discarded to Last rites. A Mesmeric Fiend took yet more removal out of Malherbaud's hand.

Malherbaud got up to five land in time to kill the Torturer with a Thermal Blast before it got active and killed the Avenger. He hit for three with the Avenger to leave the Dutchman on 11 life while van Leeuwen hit back with his three monsters to put Malherbaud on 8.

Van Leeuwen cast Diabolic Tutor for an Afflict. He used this to kill the Avenger and an Aether Burst to bounce the Frenetic Ogre Malherbaud had brought out. This gave him Threshold for the Frightcrawler and Malherbaud scooped as he had no way of stopping the fear-creature from killing him the next turn.

Malherbaud chose to go first again and this time had a much better start with a turn 1 Chatter of the Squirrel. A second joined it on the next turn and van Leeuwen traded an Escape Artist for one of them.

An Ember Beast came out to give the remaining Squirrel company but van Leeuwen threatened to break up that relationship pretty quickly when he brought a Cabal Torturer onto the table. 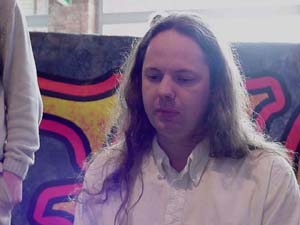 Malherbaud thought for a long time before throwing a Blazing Salvo out in its direction. Van Leeuwen chose to take five damage instead. A result that was very good for Malherbaud as he also had a Crackling Club to brain the annoying Minion and in came the Squirrel with Beast in tow for four damage.

Van Leeuwen brought out a protection from red Aven Smokeweaver but a hasty Pardic Firecat from Malherbaud meant van Leeuwen had to block the Ember Beast. A Broker to back it up perished to Sonic Seizure and another three damage slipped through.

Van Leeuwen managed to Dematerialize the Squirrel Token but never drew anything else to deal with the Firecat and Beast tag team.

Van Leeuwen chose to go first and Malherbaud whipped out turn 1 and 2 Squirrels with Chatter again. This time van Leeuwen had a Phantom Whelp to hold them off.

A Peek revealed a Firecat was on its way and Malherbaud also held Thermal Blast, Acceptable Losses and Seton's Desire.

Van Leeuwen forced Malherbaud to use the losses by summoning a Cephalid Broker, but the random discard only netted a Forest. The Broker didn't stay in the graveyard for long as a Gravedigger dragged it back.

The hasty Firecat got double-teamed by Whelp and Gravedigger.

Van Leeuwen dropped a Coral Net on the Elephant and brought in a Zombie Assassin. Malherbaud decided the Elephant wasn't good enough for the upkeep of a Masticore and sacrificed it in his upkeep. He thought for a while and played nothing in his turn. 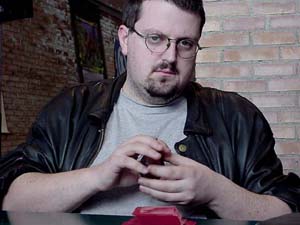 Frenetic Ogre came into play as van Leeuwen Tutored for and then cast his pro-red Aven Smokeweaver. Last Rites ripped a Thermal Blast and Liquid Fire out of Malherbaud's hand. But more importantly it cost van Leeuwen the Broker and a Gloomdrifter.

Malherbaud went after the Zombie Assassin with a Flame Burst, this killed the Frenetic Ogre in response but left the way clear for Malherbaud to drop Seton's Desire on a Squirrel and now it had threshold he could kill the annoying pro-red blocker.

Van Leeuwen was left with an Escape Artist and Phantom Whelp back in his hand while Malherbaud had just an Ember Beast. Not for long as Acorn Harvest gave it plenty of company and a Krosan Avenger came out to turn things around for the Frenchman.

Van Leeuwen drew Shadowmage Infiltrator but even Jonny Finkel couldn't save the Dutchman as Sonic Seizure sent it to the graveyard.

The Gloomdrifter, while not so good before, probably would have been quite good right about now as the Frenchman completed the comeback and swarmed Van Leeuwen with a bunch of Squirrels.