Round 12: Pierre Malherbaud vs. Olivier Ruel 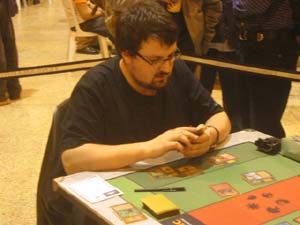 Pierre Malherbaud is trying to make up for the lost draft.Pierre's weekend was going quite well (he breezed through the first day and was in the top pod) but came to an almost crashing halt this morning. Following instructions from the fact sheet Pierre arrived at the site a bit before nine, ready to draft.

The problem was the draft had started at eight, just like the Head Judge had warned the day before. All that was left to do was hand Pierre an automatic 0-3 in the first pod and let him play again in the second pod.

So for Pierre Malherbaud, a brilliant French player, the day truly starts NOW. Lets see if he came make up for the lost rounds. His first hurdle in that quest is the one, the only, Olivier Ruel. It should be a fun match.

To return the favour Olivier killed a newly-arrived Wirewood Channeler with Shock, sent his crew in and dropped a morph. Malherbaud play Menacing Ogre and after much mumbling Olivier won the won the "auction", paying six life to keep the Ogre in check. A turn later he traded his Blade Sliver for the Red monster.

But Pierre wasn't out of monsters yet. Next came Kilnmouth Dragon, which Olivier Ruel dispatched with an attacker and Solar Blast. His constant badgering was forcing Pierre to risk tricky blocks since he was at a mere seven life. Still he poured monsters: Glowering Rogon and Krosan Tusker. 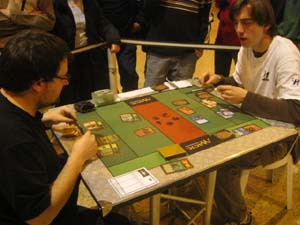 An All-French match.Ruel dispatched the Rogon but Macetail Hystrodon quickly replaced it. Pinpoint Avalanche killed the Hystrodon has Olivier Ruel begged his deck for a way to deal the final seven points of damage. He played chump blocker after chump blocker, cycled cards, slowly losing life points. Until with his back firmly against the wall... he played a massive Starstorm.

Pierre bounced right back a morph - Treespring Lorian - Wirewood Elf and Elven Riders. On his side Ruel had Covert Operative. He drew his final card and screamed in pain. Had Pierre not played the Riders has a blocker he would have won the game with his final card at one life: Avarax.

Oliveira came smoking with three creatures before Malherbaud could even blink. After cycling Krosan Tusker Pierre finally played a creature: Wirewood Channeler. He quickly followed that with Symbiotic Elf and Birchlore Rangers. But Olivier's flyers never looked back, never slowed down.

Steadily they brought Pierre Malheurbaud to the point where he needed to topdeck a good answer just to stay alive. He didn't and they were soon shuffling for the decisive game. 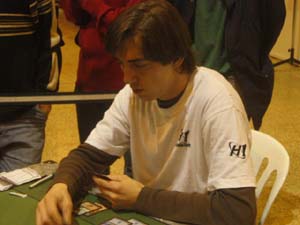 A strangely calm Olivier Ruel.This time no one blinked until the third turn were Pierre played the costumary morph (Shaleskin Plower). Olivier's first play was Blade Sliver. They traded and Ruel played Skirk Outrider while Malherbaud cycled Krosan Tusker. That extra land powered out Elven Riders and Pierre even had Solar Blast for Ruel's Mistform Dreamer.

But the Skirk Outrider wasn't going away and was quickly joined by Avarax giving the former French National Champion a big trouble to solve. He traded his Riders for the Avarax and used a second Solar Blast to kill a second Dreamer. Treespring Lorian showed up but Echo Tracer bounced it right back. That tempo shift was enough to power through a final solitary Skirk Outrider. Pierre's next draw didn't yield any way to stop three creatures with no nonland permanents at one life.