Round 12: Racing to Victory

straight off of his Top 8 performance at the Limited format Pro Tour-London, Arnost Zidek was set out to prove that he could go both ways. He played Boros Deck Wins, a deck choice which we have been seeing a lot of at the top tables Saturday. His particular version was developed with two other Czech team members. All of them made Day Two, but Arnost has the best record of the three at 8-3.

Fresh off a Top 8 at the last Constructed Pro Tour (Philadelphia), Mark Herberholz showed up to the event with a deck from Nick West. Nick made Top 8 in the Extended format Pro Tour-Columbus. Nick gave Mark a Gifts Domain deck designed by Stewart Wright. Mark was looking to improve on his 27 Pro Tour points this year. 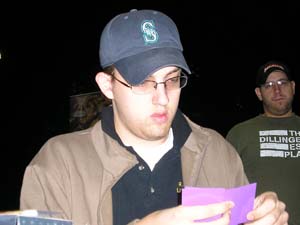 Mark began the match by main-phase fetching an Overgrown Tomb. Apparently, he was scared of Stifle. Arnost was playing a different game though and let Isamaru, Hound of Konda out on his first turn.

Mark played a second fetchland as Isamaru hit him for 2. Arnost dropped down a Hearth Kami to go along with the Hound. Mark's first spell of the game was an Eternal Witness to bring back a fetchland. Arnost continued the pressure, killing the Witness with a Lava Dart and coming in for four more damage.

Mark just played a Temple Garden before passing the turn. Arnost attack for four again, which left Mark at 7. Arnost was smart enough to not over commit, fearing the that Mark showed him the following turn.

During Mark's end step Arnost threw a Char at Mark and a second Char, after Mark activated the Deed, finished the game. 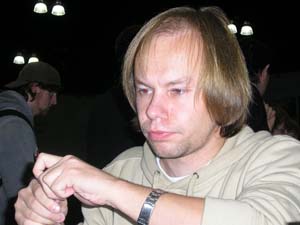 The fires of Boros Deck Wins burned in Zidek's eyes.

Mark sent back his first hand to begin Game 2 and then again, going down to five cards. It was almost a direct reenactment of the Round 10 feature match with Jeff Novekoff, although Jeff went down to three cards before he finally kept a hand.

Another mulligan left Mark at 4 cards. He started with a Sensei's Divining Top but Arnost had a Pithing Needle ready. On his second turn, Arnost cast a . He followed up the Legionnaire with a Grim Lavamancer and a second Pithing Needle on .

Mark hadn't done anything but play land since his Top was stopped. Arnost attacked for three and hit Mark for four more with a Char. An attack plus burn was all that was needed to finish Mark off.