The player at Pro Tour–San Juan who had most recently won a premier-level event was none other than American Magic player Brad Nelson, winner of Grand Prix–Washington D.C. the weekend prior to San Juan. In fact, many players made a brief stop in D.C. for the GP on the way to the Pro Tour in Puerto Rico with numerous flights between the U.S. and Puerto Rican capitols. Andrea Giarola entered the match in the role of up-and-comer, hoping to spoil the American's run at back-to-back premier level event Top 8s. The Italian player was bringing the aggressive mono-red strategy to the table. Both players were in great shape to Top 8 at 10-1.

Out of the gates came Giarola, with a first-turn Goblin Guide that dropped Nelson to 18, though it drew the American a free land. He played a Misty Rainforest for his turn, but passed without realizing he needed to discard. A spectator caught the mistake and notified a judge, but before the judge could get to the table, Nelson had realized it himself and called for assistance. The penalty assessed was simple: he discarded a card as he would have and picked up a game rules violation. Relatively minor, particularly compared to the Goblin Guide and then Zektar Shrine Expedition Nelson still had to deal with from Giarola. 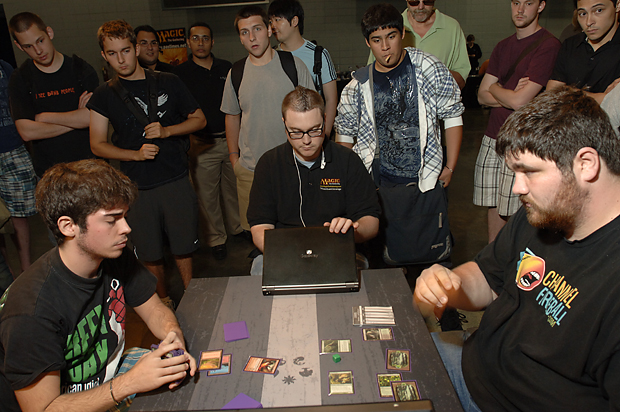 Lotus Cobra hit for Nelson, but he opted not to use it to block, falling to 13 on his opponent's next attack. Giarola used Staggershock to end the Cobra, and Nelson re-upped with a River Boa. The Staggershock rebound forced Nelson to regenerate his 2/1, but when Giarola revealed a Devastating Summons sacrificing three Mountains during his main phase, Nelson conceded, knowing he couldn't keep up.

The two players remained silent as they shuffled for the second game. Giarola spoke fluent Italian, but his English was limited, as was his opponent's grasp of Italian. The only words exchanged were when Nelson stated he would play first.

Nelson's mono-green deck did a much better job putting up a defense in the second tilt, opening on Khalni Garden for a 0/1 Plant chump blocker, then following up with Nest Invader for a 2/2 blocker and a 0/1 Spawn blocker. Giarola simply cast Kargan Dragonlord after not having cast anything on his first turn. Nelson continued casting everything in his hand, dropping River Boa and Arbor Elf onto the battlefield.

Not even having played a third land, Andrea Giarola's red deck was looking at a horde of creatures on his opponent's side of the table. How was he ever going to beat down if he couldn't get through? Whatever the Italian's plan was, it didn't involve casting a spell on his third turn, as he passed instead. Nelson sent with Boa and Nest Invader, getting through with the Snake but losing his Invader to a Staggershock. Postcombat, Nelson had Wolfbriar Elemental for two 2/2 Wolves and it looked like the second game was going to end as quickly as the first, albeit with the opposite outcome. 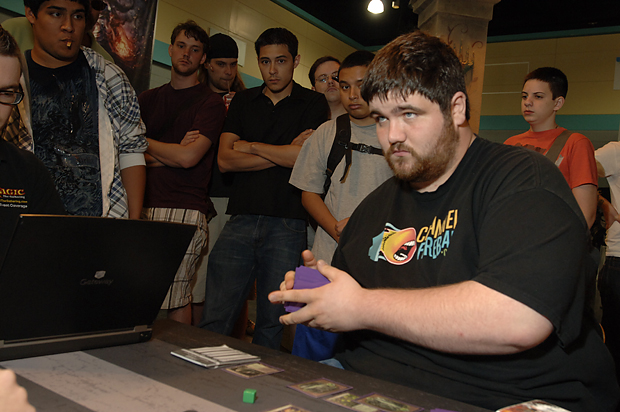 I'm gonna make you an offer you can't refuse. (Hint: It's dragons.)

Kargan Dragonlord inched up to level four while Giarola used the occasional burn spell to take out one of his opponent's attackers. As a 4/4, the red leveler was able to begin blocking 2/2s from Nelson, but it wasn't to be; Nelson untapped and cast Eldrazi Monument, jumping and pumping his team in order to represent lethal while Giarola couldn't do anything to stop it.

It was all down to the final game to determine which player would leave the match with only a single blemish on their record. Giarola was on the play and kept his opening hand while Brad Nelson had to agonize. He shuffled his first hand back, then pored over his second. He didn't have any action until the third turn, a start that was potentially far too slow to keep up with red, but if he went to five he could find an even worse hand. He opted to keep, and Giarola opened on a second-turn Kargan Dragonlord.

The 2/2 began attacking before being pushed up to level 3, and Nelson made his first spell of the game: Leatherback Baloth. The 4/5 was a powerful threat, but not good enough to block a Kargan Dragonlord on level 4 or higher. Recognizing that, Giarola used

to make the Kargan a 4/4 flyer, attacked, then made it level seven post-combat. 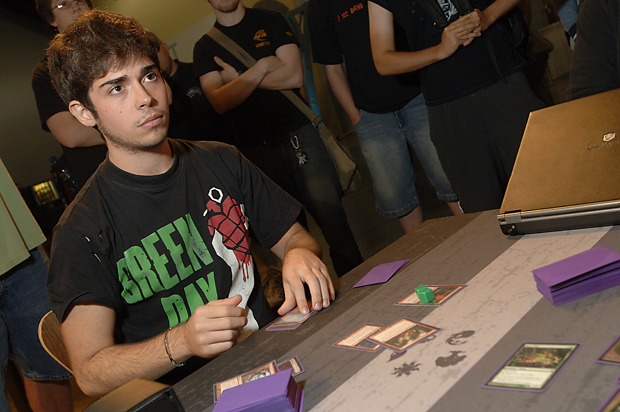 Giarola displays his sense of both fashion and irony.

Nelson drew his card for the turn, but facing down a probable 8/8 that would have both flying and Firebreathing was too much. He extended his hand.

Before signing the slip, Nelson revealed the two Vengevines in his grip that would have allowed him to attack for lethal over two turns had he not been killed first. He still had all those, but they weren't enough to let him win.