Round 12: Rob Dougherty vs. Andrew Wolf 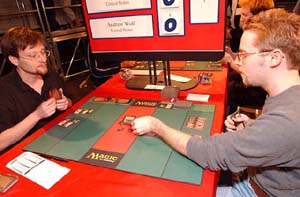 Andrew Wolf sees this tournament as the moment his comeback blossoms. On and off the Tour since his 1998 Top 8 in L.A., Wolf is a longtime friend of the Deadguys, and has a reputation as a genuinely nice guy. He's up against one of the game's current strongmen, Rob Dougherty. After the draft, Dougherty made no bones about his deck being awful. Wolf is lucky enough to have one of the table's best deck.

Dougherty started Game 1 with a Mad Dog that hit a few times before Whispering Shade came online and sent it to the graveyard. Wolf's Dusk Imp swung in the air unimpeded. Back to back Springing Tigers forced the Shade to stay on defense. Both Tigers came in, and Dougherty tried to save the blocked one with Refresh. Wolf countered it with Aether Burst. Flame Burst finished the Shade.

Now Wolf was swinging. The Tiger returned, but met Repel on its next attack. Dirty Wererat made the Tiger a lot less of a threat, especially after Dougherty found a second. Aether Burst gave Wolf still more time. Morgue Theft got him his Shade back, and Scrivener recursed his Burst. It didn't take long to get to lethal damage.

Dougherty had to content himself with a bunch of small soldiers in the second game. Diligent Farmhand teamed up with Skyshooter in a fabulous display of attacking for two. Dougherty encouraged them, saying "Serve, my little beaters!" 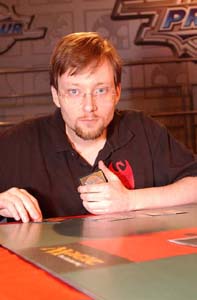 Both players waited. Dougherty's Stalking Tiger came a turn late, and was Aether Bursted. Wolf reclaimed his spell with Scrivener. Dougherty Firebolted and dropped Wolf to eleven. The Tiger came back. Wolf finally found a solid defender in Rotting Giant. Dougherty suicided his Tiger into it, watching Wolf use his Burst for the save. The last of Dougherty's offense was Krosan Beast. He had two cards in his graveyard.

"Watch out for this guy!" said Dougherty, "You realize he's a squirrel BEAST, right?" The minor threats forced caution on Wolf. Dusk Imp and Rotting Giant came down. Dougherty attacked all out, trading his Beast for the Imp. Lucky for Wolf that he had no further play, just Flame Burst and Reckless Charge.

Wolf came down with Dirty Wererat. Dougherty drew Muscle Burst. He Charged up the Farmhand and swung, losing his Farmhand and taking down Rotting Giant with the Burst. Dougherty started drawing troops, but his Stalking Tiger and Krosan Archer were stopped by Fervent Denial. Childhood Horror gave Wolf a clock.

Dougherty tried to be happy with his draw of Chatter of the Squirrel, making two tokens. Frightcrawler gave him more evasion problems. He continued to draw land. Gravedigger got Rotting Giant back for more. 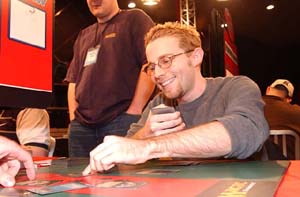 With Wolf at seven and looking strong, Dougherty decided he needed to play to burn him out. He drew Mad Dog, and got the party started by flashing back his Firebolt. Wolf got the Imp back with Morgue Theft. Dougherty drew Rabid Elephant and Charged it up. Later he said he said it was a necessary move, costing Wolf a card in hand. He couldn't play for a long-term surprise Charge, because of Wolf's Aether Burst. Wolf attacked and lost both his Imp and Horror to the Skyshooter.

Morgue Theft got the Imp over the Horror so Wolf could still regenerate. The Elephant kept the tap on. Mongrel and Mad Dog joined Dougherty's team. The evasion force put him to ten. Zombie Assassin helped hold the fort. Dougherty attacked all out, losing Mad Dog and a Squirrel, but killing Gravedigger and putting Wolf to four.

Skull Fracture pulled the Flame Burst early. Wolf was at a nervous two life. He was a long way from killing Dougherty. The Dusk Imp kept nibbling. Dougherty drew land. He then drew Blazing Salvo, but had to use it to kill the Imp. He kept Wolf guessing until lethal damage resolved before smiling and saying "You got me."