Round 12: Romuald Balluais vs. Nicolas Labarre 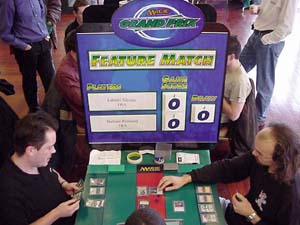 We have known Nicolas Labarre since he made the perfect metagame call in Pro Tour Rome 1999 (also known as Pro Tour Academy). His Merfolk deck was perfect for a room full of Combo and only Tommi Hovi was able to stop him, in the finals.

Romuald Balluais is an up and coming French player, in fact so up and coming that a lot of players already regard him as a sort of star in the making. So keep an eye for his name because if they are right, we might just have here the next big French player. This is quite a familiar match for them since they play together every week and are good friends. The only difference is that this time they are playing for Top 8 instead of bragging rights.

With the clock already ticking Nicolas won the dice roll but had to take a mulligan. He played a second turn Escape Artist followed by Cephalid Looter and Romuald dropped the math-skill demanding Psychatog and a Childhood Horror.

The Looter blocked the Psychatog and like any block involving a Psychatog it got tricky. Labarre tried to protect the dying Looter with a Shelter but Romuald had a Syncopate and then discarded an Island to save the Atog.

With his friend tapped out, Nicolas figured it was a pretty good time to steal the Horror with a Persuasion. That allowed him to rule the skies but Balluais dropped a good ground racer (Mindslicer). Labarre was ready for that as well using a Second Thoughts to get rid of the monster and its troubling "exit" condition.

A Dematerialize bounced the Horror, destroying the Persuasion and the Psychatog bumped into a Mystic Zealot. When Balluais tried to finish it of with an Afflict Nicolas had the Shelter to save it.

Until now the game was racing along at a good rate for a control on control match but Labarre gave Balluais some food for thought in the shape of a Hallowed Healer. A Puppeteer showed up to control it but both players still seemed constantly lost in thought, trying to find a way to definitely tilt the scales their way.

A second Hallowed Healer got Romuald into big trouble and when Labarre Syncopated his returning Horror the game seem very close to ending. The Escaped Artist nibbled away bringing Balluais to five.

When Romuald Afflicted a Healer he gave Labarre Threshold thus pumping the Mystic Zealot and giving it flying.

That was obviously the question and his hand and deck didn't seem to give him a good answer. He dropped a Gravestorm to take away Labarre's Threshold. Nicolas obliged by removing a card and added an Aven Fisher to his attacking crew.

Unable to solve that Romuald conceded the game.

After his first game's victory Nicolas came out fast with a third turn Cephalid Looter but Romuald was having none of this nonsense and bounced it with an Aether Burst.

A second Aether Burst cleared the way for a Psychatog (by the way I had to get an aspirin between games and it wasn't simply because of the lack of sleep, Psychatog is a pain). The Looter came into play for the third time and Romuald tried to kill it with a Patriarch's Desire but Labarre was tired of being bossed around and save it with a Shelter.

Romuald tried to beef up his strike force with an Aven Windreader but Labarre had a Rites of Refusal to "Force Spike" it. The tide had turned and visibly shaken Romuald watched Nicolas bring back the Shelter with a Scrivener and replaying the Zealot.

Although Balluais had a hole-punching Psychatog it was outnumbered by the three creatures and it would have a hard time attacking. Romuald tried to flashback Dematerialize to bounce a creature but Labarre used the Shelter. Almost locked out of the game he could only laugh when Labarre cast a Concentrate.

Romuald (smiling): "With friends like this, who needs enemies? This is getting dramatic."

A Cephalid Scout and an Escape Artist came in to add more salt to Romuald's bleeding wounds. They pecked along the mighty flying Mystic Zealot while spectators asked someone to take a picture of Labarre's hand (which included a Syncopate, Second Thoughts and Persuasion).

Balluais played a Mindslicer and had to join in the laughing when his friend Nicolas took it with the Persuasion. The brutally lopsided match was over in a record time for two control decks.