Round 12: Sam Gomersall vs. Marco Blume 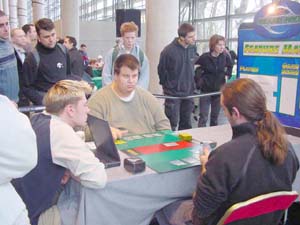 This match-up sees two control decks facing off. Marco has a Psychatog deck and Sam has the Awakening deck which was used by some members of Team Punisher at the Pro Tour in Houston. It's an incredibly favorable match for the German.

Marco went first with a third turn Psychatog, which Sam was unable to counter. Marco just swung for one for a couple of turns, while the English player used two Accumulated Knowledges and an Intuition to look for answers.

Gomersall played a Compulsion which was Mana Leaked by Marco. Sam paid the mana but this left him with just a blue mana open. Marco had two Accumulates of his own, which drew him a total of seven cards. This was more than enough to make the Psychatog lethal that turn. 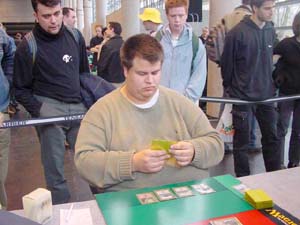 Sam had to take a mulligan going first, and stalled on two lands for a turn. Although he then managed to Intuition for Accumulated Knowledge, Blume had a Counterspell. Meanwhile the German was applying the one point beatdown with a Psychatog.

Marco played his own Accumulate for four, then Intuitioned for three more. The Englishman had to Intuition for Moment's Peace in the hope that Marco didn't have a Counterspell, but unsurprisingly the German's fifteen card hand did have one.