Round 12: The Secret Code of

he 2005 Invitational Players' pick and British national Sam Gomersall teamed up with 2004 U.S. National Champion Craig Krempels to make it to the verge of Day 3. On the other side of the table sat 2006 Pro Tour Rookie of the Year Sebastian Thaler, a car salesman near Rosenheim Germany, partnering with fellow German Florian Pils. Both teams are on the Day 3 bubble at 8-3. 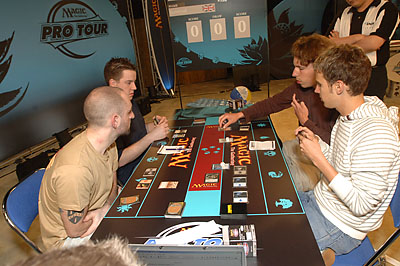 Sam Gomersall and Craig Krempels face off against Sebastian Thaler Florian Pils at a table not lacking in prior glory.

Thaler had mustered the forces of blue-black, while Pils had mastered white-red. Krempels/Gomersall adopted the two-headed Sliver strategy, which has grown increasingly popular amongst the top draft tables of day two. Here in R&D, we were pretty surprised that so few of the PT competitors saw this powerful strategy coming. We even snuck a huge hint about the strategy into the Time Spiral set by literally naming a card "Two-Headed Sliver." It seemed to us like we were giving a pretty blatant hint, but it still didn't get picked up. I mean what more do we need to do?? Keep an eye out for future card names that hint at the most powerful decktypes we find in internal R&D playtesting.

Interestingly, Krempels had Sliver Legion and a Homing Sliver to fetch it and played white-blue splashing the other three colors, planning to fetch them off a couple of Dreamscape Artists and Terramorphic Expanse to deliver a truly ridiculous lord of the Slivers.

The Germans won the toss, and Thaler picked up a hand of 4 Islands, Errant Ephemeron, Fathom Seer, and Mana Skimmer-clearly a keeper. Pils warmed up a risky but promising Prodigal Pyromancer, Storm Entity, Knight of Sursi, and Chromatic Star. That was a lot of potential storm combo, depending on how greedy Pils wanted to get with his Storm Entity, and how long he wanted to wait to set it up.

The Germans opened the festivities by suspending Knight of Sursi and Errant Ephemeron, while Gomersall popped out the strategy's namesake, Two-Headed Sliver.

On turn three, Thaler conferred about whether to lead with Deepcavern Imp or Fathom Seer. He correctly went with the Imp first. If Fathom Seer were killed, he would want to unmorph it to draw cards, a move that could set his lands back disastrously on turn three, but wouldn't be as self-destructive on turn four or five. Pils backed him up with Prodigal Pyromancer, patiently setting up a big Storm Entity turn.

On turn four, the Germans went for the "one big turn" that characterizes Time Spiral Block red. First Shade of Trokair came into play. Then Thaler made Mana Skimmer, Pils played and cracked Chromatic Star, and plays Storm Entity as a two-mana hasty 4/4. The Entity, Imp, and Shade charged the red zone with

Well it wasn't quite no loss: Storm Entity and Deepcavern Imp still took a chunk out, sending Gomersall/Krempels to 23. 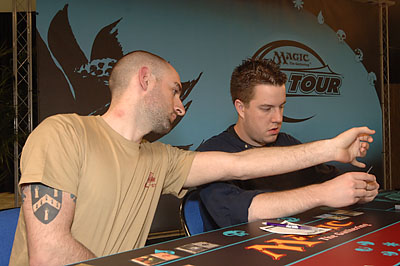 This is called 'signalling.'

Gomersall and Krempels responded with an even sicker turn. Low on lands and nervous about getting them tapped down, Gomersall Lightning Axed the Mana Skimmer and played his own Prodigal Pyromancer. Krempels laid down timeshifted bomb Essence Sliver, and the other two Slivers went in for 3, a 6- point life swing bringing the score to 26 Gomersall/Krempels - 27 Thaler/Pils. If Essence Sliver stayed around, the absurd life gain he generated in decks with dozens of Slivers would make Essence Warden look like Tarpan.

Fortunately for the Germans, Pils Ghostfired the Essence Sliver right away, while Thaler made a facedown Fathom Seer. Storm Entity and Imp took it back to 20 - 27.

The two Slivers returned the favor to 20 -24, and Gomersall made Spitting Sliver, while Krempels stayed untapped with a naturally drawn

, capable of just about anything.

On turn six, Thaler's Errant Ephemeron finally showed up and bashed in alongside Deepcavern Imp for 6. It stood 14-24. In a slew of card advantage, Thaler floated

, flipped Fathom Seer by returning 2 Islands, and drew up Shadowmage Infiltrator, Gorgon Recluse, and Magus of the Future. The Magus came down, played a free swamp off the top of the deck, and revealed a Looter il-Kor on top of the deck to come.

Fighting back at end of turn, Krempels locked down the Errant Ephemeron with Leaden Fists, and Gomersall's Prodigal Pyromancer pinged a player for 1.

In Krempels' main phase, he allez-ooped with Ovinize on Magus of the Future, letting Gomersall slamdunk the rare wizard with Tim. The fact that Krempels waited until his main phase to kill Magus instead of doing it at end of turn implied that they thought they might draw a better answer to the Magus-perhaps a devastating Enslave awaited in Gomersall's black-red deck? They conversed and sent in Spitting Sliver. If the Germans double-blocked it with Fathom Seer and the 4/4 Storm Entity, krempels reasoned aloud that they could just first strike the 1/3, then regenerate from the 4/4. The Germans took 3. Even three innocuous-looking, low-profile common Slivers like Spitting Sliver, Two-Headed Sliver, and Poultice Sliver can combine to produce some very effective combos. 14-20

Deepcavern Imp took the life totals to 12-20 while Gorgon Recluse showed up to help block. All Pils could draw was a string of 2/1s and 3/1s that hid in fear of Prodigal Pyromancer.

Gomersall: "All those bigger guys, and this little Sliver still goes in. Brave Sliver."

On the next turn, Spitting Sliver went in alone against Gorgon and 4/4 Entity, with first strike, Tim backup to combine with the first strike, and Double Poultice activations watching his back. Poultice Sliver can really make combat impossible for opponents, and the Germans took 3 more. A main phase Haunting Hymn from Gomersall took Shadowmage Infiltrator, Swamp, Island, and Looter il-Kor, an enormous blast of card advantage.

On turn nine, the Germans turned up the heat, sending in Deepcavern Imp, Fathom Seer, Gorgon Recluse, and the 4/4 Storm Entity. Poultice and Two-Headed Sliver double-blocked the 4/4 Entity, hoping to Tim it out with first strike, without even needing Poultice activations. It seemed like a wasteful attack from the German team, losing their 4/4 for no board advantage, but it did infict 5 points, sending the totals to 7-20. The Germans were clearly intentionally throwing their creatures away for player damage. This had to be either very very good for the English-speakers, or very very bad. 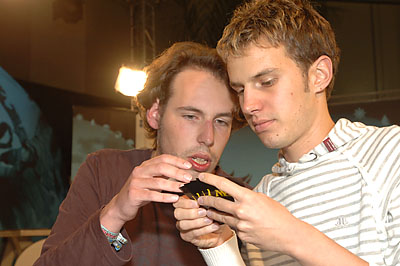 The Germans spring their trap.

Gomersall was conscious of the Germans' sudden life total aggression, and main phase Pyromancered the Emberwilde Augur and Ghostfired the Deepcavern Imp to shut those sources of damage down. Krempels made Dreamscape Artist and an Opaline Sliver with a long list of abilities. With the German damage sources all turned off, the Germans throwing away their men in attacks, and the Sliver army now near-invincible in combat, Gomersall and Krempels seemed to have sealed it up.

At end of turn, the Germans flipped over their morph. It was Coral Trickster. Wait, it wasn't just that…It was Coral Trickster untapping the forgotten Errant Ephemeron undearneath Leaden Fists as a 7/7 flyer! Gomersall/Krempels were tapped out, and Ephemeron attacked for the final 7 and killed them. Yup, it all happened that fast. The Germans' seemingly overaggressive attacks were actually an orchestrated campaign to take the enemy down to exactly 7 life so that the sick Coral Trickster vs. Leaden Fists combo could bring the game to a sweet win.

Certainly an amazing ending to a surprising game.